‘Captain Marvel’ is everything that drives me up a wall about the MCU, I hate it so much 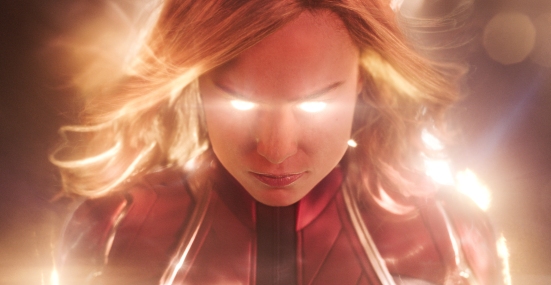 OK, it isn’t absolutely everything that drives me up a wall about the MCU. Danvers actually has relationships with her antagonists, which is a significant step up from the Marvel standard, and there’s much better special effects than we’re used to seeing out of the studio. Images courtesy Walt Disney Studios Motion Pictures.

6/10 It is such a tremendously good thing that Captain Marvel is a movie that exists, but could the movie itself have been good? Is that really so much to ask?

In 1996 on the Kree homeworld of Hala, Vers (Brie Larson), an elite Starforce warrior and amnesiac of six years, suffers nightmares of her mysterious past. After a rescue operation goes awry, she crash-lands on Earth. As she hunts down the skrull leader Talos (Ben Mendelsohn) alongside young SHIELD agent Nick Fury (Samuel L. Jackson), she begins to remember her life as Air Force pilot Carol Danvers. She reconciles her shattered identity with her nigh uncontrollable energy powers.

Captain Marvel feels like a cobbled together facsimile of a better Marvel movie, and that’s probably because most of its creative team is cobbled together from other MCU films. Writer/director duo Anna Boden and Ryan Fleck – seriously? You couldn’t get a solo woman director for this? Says here Marvel was “courting several women,” so it feels like they could have.

Boden and Fleck were previously considered for Guardians of the Galaxy, and credited story writer Nicole Perlman worked on that as well as the first Thor. Cinematographer Ben Davis worked on Guardians, Avengers: Age of Ultron and Doctor Strange, and co-editor Debbie Berman helped with Spider-Man: Homecoming and Black Panther.

Seeing Danvers in both the teal/silver/navy setup of the Kree military and in Captain Marvel’s sunny red/gold/royal blue, I was looking forward to how they would handle the color switch. Color is really important in movies, and it looked like a great opportunity for character stuff and visual storytelling. In the scene, Danvers, as an afterthought, lets Rambeau’s child play with her suit and try various colorsets, but the porch is lit so poorly that you can barely see the changing colors. In a scene that only exists to show off changing colors, you can barely see the colors!

Berman and co-editor Elliot Graham have hatcheted most of Captain Marvel to pieces. The movie is both way too fast and has almost no rhythm, with most scenes having absolutely no room to breathe. Several establishing and transition shots have been sacrificed, and particularly in chase scenes, it feels like many shots are missing from the actual body of the scene.

The large-scale structure of the film is also a massive missed opportunity. Danvers has several flashback scenes of her life on Earth. These scenes were obviously considered hugely important at some point in the creative process – they’re key to that match cut that the ad campaign was so in love with (check 1:10 and 1:40 of the first trailer), and they feature several sets that don’t pop up anywhere else in the movie. They even brought in two younger actors to play Danvers at ages 6 and 13 (London Fuller and Mckenna Grace).

The clear intention, and the best version of this film, was to weave these scenes thoroughly into the main runtime, deepening the portrait of Danvers’ identity crisis and putting more emphasis on her relationship with fellow pilot Maria Rambeau (Lashana Lynch), but all references to these are stuffed into two cramped sequences that are more focused on other plot functions.

But the biggest editing problem, as it is with almost every MCU movie, is the completely unwatchable action scene editing. The fight scenes in Captain Marvel make my eyes bleed. They are absolutely incomprehensible. Poor Brie Larson trained for nine months and learned three martial arts to do the fight scenes in this movie just so they could be butchered in the editing room. Charlize Theron only trained for two and a half months on Atomic Blonde, and they did this-

I’ve heard some shocking excuses over the years for the way Marvel edits its fight scenes – most of which boil down to “it’s actually supposed to be bad, just get over it,” which I absolutely will not – but in Captain Marvel, which is action-heavy even by superhero movie standards, it is an absolute crime.

With the end product coming in at a healthy 124 minutes, length must have been a major factor in the editing decisions, but if there’s a 150 minute version of Captain Marvel floating around somewhere, I’m not sure it would be much better because of the other major systemic problem, Davis’ cinematography, which is overwhelmingly lazy at several key moments.

Larson is one of the best actresses in her generation, and she has an absolute blast as the cheeky Danvers. Samuel L. Jackson is a national treasure, and Larson’s chemistry with him and Lynch is palpable.

The second act culmination between Danvers, Rambeau and Talos, the potent emotional climax of the film, stands out – three characters, three shots, completely static throughout the scene, cut between on what feels like a metronome. No movement, no use of the space, no physical interaction or shared shots at all, they just crammed Mendelsohn into his prosthetics, blitzed through the lines and called it a wrap.

What’s most frustrating about this movie, and this is another common thread with the MCU, is how much better the base story is than the end product. Captain Marvel is a wonderful and delightfully feminine story about a woman coming into her power against an oppressive collective that gaslights her and forces her to suppress her feelings. It could easily be read as an abuse survival story, actually, with the focus on Danvers’ relationship to Kree society as a whole instead of an abusive romantic partner.

That’s one of several ways Captain Marvel’s treatment of its lead character comes as a breath of fresh air. Outside of a brief cat-calling incident, Danvers is not romanticized or sexualized in any way. She does face sexism both acute and institutional – the entire plot hinges on the fact that the Air Force did not allow women in combat positions until 1993 – but the story doesn’t devolve into tired rape revenge tropes or get bogged down in clapping back on extras’ misogyny. This story is squarely about Danvers, it is driven entirely by her decisions and motivations and growth, none of which are dictated at all by the other characters in the film, and that’s still a pretty rare thing for female protagonists.

Commercialized feminism is fine. On the balance it’s doing a lot of good, and these movies are really annoying weirdos on Twitter, and that’s spectacular. But if you’re not showing up for the latest from Sofia Coppola or Katheryn Bigelow, or if you’re not up on the distinctly feminist work being done by guys like Alex Garland and Denis Villeneuve, then don’t come at me about how Captain Marvel is a landmark for feminism in film. It’s a landmark for the sale of feminism as a movie ticket, which is not remotely the same thing.

In spite of its chronically shoddy filmmaking, the MCU has gotten by for 10 years now by consistently providing those meme-ready character moments, and Captain Marvel has those by the barrel. The lack of gross tropes in Danvers’ arc is outright liberating, as is the “I have nothing to prove to you” moment. The Stan Lee cameo is especially touching.

As infuriating as Captain Marvel was for me, most people are going to love this movie, and it’s plain as day why. It’s going to mean a lot to women and girls, and it’s got those unique Marvel dopamine fixes that have become such a heavy part of modern moviegoers’ media diets.

But why, why couldn’t they have had these things in a better movie?