‘The Nun’ is 90 minutes of unvarnished nonsense 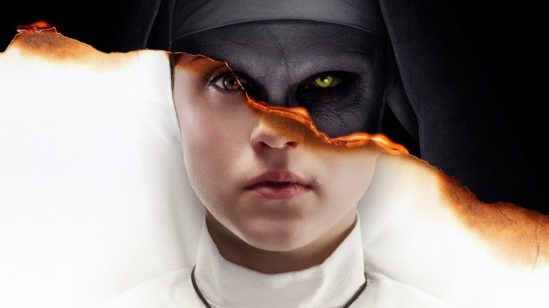 This split promotional image is literally the only creative visual associated with this movie, and it has barely anything to do with the story. Image courtesy Warner Bros.

1/10 Imagine if The Evil Dead 2 took itself seriously. That’s The Nun. The Nun is that bad.

“The darkest chapter of The Conjuring Universe” – because aping the language of its sister Insidious series wasn’t enough, they also had to steal from the MCU – begins with the Vatican learning that a nun of the Cârța Monastery in Romania has seemingly hanged herself. To investigate, Rome sends its worst – Father Burke (Demián Bichir), a priest disgraced after an exorcism gone wrong, and Sister Irene (Taissa Farminga), a novitiate nun who is solicited because of her “familiarity with the territory.” What is meant by this is never explained.

These two obviously underqualified exorcists journey to Southern Transylvania, where they meet Maurice “Frenchie” Theriault (Jonas Bloquet), the local who first made the horrific discovery. Together, they journey to the monastery, which to their great alarm, they find completely abandoned.

According to some books that were conveniently left lying around, Burke learns they face Valak the Profane (Bonnie Aarons), a demon who delights in torturing his victims with frightening visions.

You know what that means! It’s time for 90 minutes of unvarnished nonsense that we’ve been conditioned to recognize as “horror.” Settle in for long periods of silence, and then suddenly a loud noise! Watch with bated breath as the camera pans 90 degrees, finding nothing, but awe when it pans back and something in the background is slightly different! Marvel at filmmaking equivalent of a child passing a quarter behind his back as a lady in a halloween mask jumps out from off camera! Oh, so startling!

Everything that happens onscreen is completely random and meaningless. Burke is tormented with images, some of which are from his backstory, but most of which are just white noise. Irene, who’s backstory is that she sees visions sometimes, is tormented with visions of there being nuns at the convent – well, less tormented than she is strung along. None of it is real, none of it advances the story in any way, it’s just the nonsense machine churning out its stuff.

Of course, saying that none of the horror scenes advance the story implies that The Nun has a story to advance. It doesn’t. It has plot elements. Burke has his backstory, Irene has a mild crisis of faith ahead of taking her vows and of course there’s the main story with the haunted monastery.

But it doesn’t have a story. All of these plot threads play out almost of their own accord, with characters making few if any choices, none of them meaningful. If your characters don’t make any choices, you’ve got no story.

It is perhaps the ultimate indictment of The Conjuring series – or perhaps the ultimate codification of what they’re really trying to do – that of the now five entries in the series, only two of them are in the main series and three are spinoffs based on two breakout “characters,” those characters being a creepy prop and a lady wearing a decent halloween costume.

No, the ultimate indictment of this series is that, in this spinoff about the lady in the decent halloween costume, they can’t even make good use of that halloween costume. It’s revealed later in the movie that Valak has disposed of every nun in the monastery long before Burke and Irene arrive, and everyone they encounter is a hallucination created by Valak to screw with them.

So what do Irene and Burke encounter under these conditions? What’s the screwiest thing Valak can come up with? Nuns, mostly alone, who creepily pretend to ignore their guests until eventually yielding and expositing helpful plot information.

So much of The Nun, almost half its runtime it feels like, is trying to draw tension very specifically out of a lone nun with a concealed face, trying to get the audience to anticipate that it might be Valak. How much more effective would that be in an abbey that’s actually full of nuns? They’d be going about their daily prayers, and suddenly, boom! One of them is scary. Anyone could be the demon in disguise!

This would also make more narrative sense – Burke states that Valak has disguised himself as a nun to blend in at the monastery, but there aren’t any nuns left to blend in with.

One last insult The Nun delivers to its audience is the insistence on invoking a “true story” on which it is based, Conjuring franchise tradition. It isn’t. The fictional Valak is derived from a demon who supposedly stalks Lorraine Warren (Vera Farminga), which the real-life Warren described as a swirling vortex with a hooded figure in the center.

When making The Conjuring 2, director James Wan decided he didn’t want to do a CGI character and instead adapted this creature to be a scary nun because he wanted something that would attack Warren’s faith, which begs the question – does it? Does it really? How exactly does something that is obviously a demon wearing church robes attack someone’s faith? Are habits really so sacred that seeing something other than a nun wearing them will shake one’s belief in a higher power? Is the sight of, basically just a really ugly nun, so outlandish that one might abandon Christianity over it?

After its central monster was made up on a poorly thought out whim, its backstory was apparently lifted straight from the 1986 film The Name of the Rose. Creativity only extends to the point that it helps avoid blowing cash on CGI, I guess.

This entry was posted in Entropy and tagged #james wan, Evil Dead 2, Insidious, Taissa Farminga, The Conjuring, The Name of the Rose, The Nun, vera farminga. Bookmark the permalink.