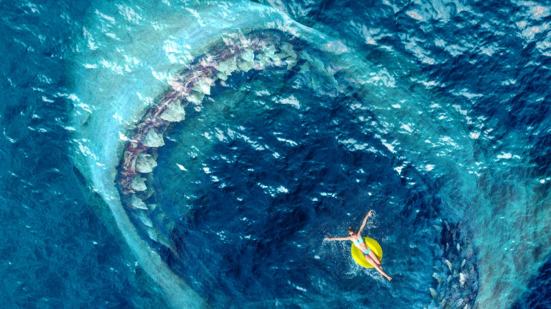 Oh man I do not like sea monsters. Images courtesy Warner Bros. Pictures.

8/10 I was perfectly fine skipping The Meg. Every five years or so, some shark movie comes along to pick the cartilage of Jaws, and I didn’t think this one would be anything special. But then it made a ton of money, and after checking out, it’s actually pretty fun.

Above the Marianas Trench in the west Pacific, a research team funded by Jack Morris (Rainn Wilson) is preparing to examine what they believe to be an even deeper part of the trench concealed under a thermocline cloud of hydrogen sulfide. Researchers discover a whole new world underneath the cloud, but one containing an ancient monster – a megalodon, a species of gigantic shark thought to have been extinct for 2.6 million years. The team escapes, but unleashes the leviathan in the process. The team, lead by rescue diver Jonas Taylor (Jason Statham), commits to hunting the beast down before it irrevocably alters the ecosystem.

The Meg gets right what so many disaster movies get wrong by developing its characters the right way – through action. Far too often, with this kind of movie that offers a broad array of characters, what you end up with is a broad array of characters who mean nothing to you as a viewer. They’ll all have some half-hearted backstory, which will have been trimmed down for time concerns, and then they’ll be thrown into a situation and viewers will be expected to root for them after what essentially amounts to a handshake.

But character isn’t backstory. Character is action. We understand, and begin to sympathize with, characters after we’ve seen them make choices that reveal who they are. So instead of putting us through a ton of bellyaching about the past – with the exception of Taylor, whose backstory designates him as the lead of the ensemble and also demonstrates who he is, thus avoiding this problem anyway – we’re thrown right into the situation, and the characters grow with the story. Every decision characters in The Meg make has at least some rationale behind it, and many have emotional rationale behind them. I really feel for these people in a way that most slasher or disaster movies don’t make me.

The Meg is also a delight from a technical perspective. The jumpscares are predictable, but not really telegraphed – but more importantly, the megalodon stays in the scene after jumping out at you. It’s become common for horror villains — *cough* Pennywise *cough* — to jump onto the screen and then just slink away, for some reason. But in The Meg, there’s still a giant shark, you still have to deal with the giant shark that’s trying to kill you.

It’s always weird to see, but Jason Statham can act pretty well when he’s given a real character.

Color, even when limited to a gradient of blues, is used wonderfully. Brightly lit shallows give way to a darkening abyss below, making the threat of the ocean ever-present. The extended scene in the Marianas Trench does a textbook job of keeping the scene visually engaging even when it is necessarily almost completely dark. The film frequently cuts back to the sonar display to keep the geography clear – which also brings the camera back into the crippled submersible with our characters, who this is still all about – and the shapes of the sea creatures remain clear as silhouettes.

Shark movies tend naturally fall into the shadow of Jaws, and that’s kind of a shame – just because a movie has a shark in it doesn’t mean it deserves to be juxtaposed with the major watershed movie that has a shark in it, and Jaws in turn doesn’t deserve to be retroactively cast as the prime example of a genre that it was never really a part of. That movie is great for many, many other reasons. This relationship plays out frequently between exorcism movies and The Exorcist, too.

But at the same time, there’s something elemental about sharks, something seeded so deeply into our reaction to them that it’s almost impossible for a shark movie not to address many of the themes that Jaws captured so well, and The Meg does measure up. Sharks are one of nature’s true masterpieces, a design that has remained essentially unchanged since, possibly, before animal life left the oceans in the first place, and the megalodon isn’t just a shark, it’s the shark. This movie is about the most powerful creature that ever swam on this planet, the biblical monster that sailors drew into the edges of the map. That scale is brought to bear here, and it’s something to behold.

This entry was posted in Entropy and tagged #jaws, #the exorcist, disaster movie, It, Jason Statham, Rainn Wilson, The Meg. Bookmark the permalink.