‘BlacKkKlansman’ too focused on its fiction 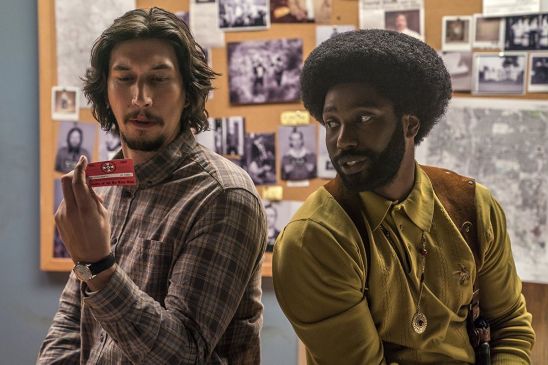 5/10 BlacKkKlansman opens on footage from Gone with the Wind, a famous crane shot of Scarlett O’Hara (Vivian Leigh) tending to wounded Confederate soldiers after the Battle of Atlanta. It then cuts to an extended scene of Dr. Kennebrow Beauregard (Alec Baldwin), a fictional ‘50s politician, arguing vehemently against integrating black Americans into schools as footage from Birth of a Nation plays over his face, stumbling over every sentence.

Clearly, this has been going on a while.

BlacKkKlansman tells the more-or-less true story of Detective Ron Stallworth (John David Washington), who in 1972 became the Colorado Springs Police Department’s first black officer. In 1979, Stallworth led an investigation into the local chapter of the Ku Klux Klan, infiltrating the Klan over the phone with a white narcotics officer – Flip Zimmerman (Adam Driver) stands in as a fictionalized version here, as the officer’s identity has never been disclosed – standing in during in-person interaction. Over a nine-month investigation, Stallworth and his team outed two Klansmen with high-level positions in NORAD and thwarted several cross-burnings and rallies. Stallworth received a Klan membership card in the mail signed by grand wizard David Duke (Topher Grace), whom he duped personally over the phone. In his memoir, Stallworth says that the Klan discussed bombing local gay bars and stealing automatic firearms, but did not follow through with these plans.

In the movie, the Klan attempts to bomb the home of Black Student Union leader Patrice Dumas (Laura Harrier), who is fictional. Dumas also serves as a love interest for Stallworth.

All of them are riding on the coattails of last year’s hit Get Out, in any case, with the subsequent films’ advertising budgets all a reflection of Get Out’s success, if not their being greenlit in the first place – BlacKkKlansman is particularly indebted to that movie, only moving forward in September 2017 with Get Out’s writer/director Jordan Peele personally involved as a producer.

BlacKkKlansman has the pedigree of director/writer/producer Spike Lee, which doesn’t count for much in 2018. It’s just not great. The movie is more concerned with cracking wise than it is with telling its own story. Far too much of the runtime is dedicated to Stallworth wooing Dumas – the local Klan isn’t even introduced until around 30 minutes in.

I feel like Quentin Tarantino specifically would do a much better job with this story, which is ironic given his and Lee’s relationship. Tarantino is one of the best ever at turning tiny conversational details into huge points of tension – he’s one of the few filmmakers in history who could reliably make a movie primarily centered around subversion via phone conversation and keep those scenes exciting. Lee’s solution is to minimize Stallworth’s interaction with the Klan, which is the story’s key selling point, and focus instead on the movie’s fictional elements.

Shifting the focus away from the Klan interaction, in addition to being kind of disappointing in a movie that’s specifically about it, also takes away from what BlacKkKlansman really gets right – its portrayal of racists. The Klansmen in this movie don’t seem particularly evil or particularly violent. They’re just kind of dumb.

The Colorado Springs KKK in this film express racism kind of like a particularly toxic fandom.

Real-life racist and misogynist groups, partially out of the genuine danger of being infiltrated by non-believers and partially out of the circular pride that comes from being a part of those groups, are often meticulous about gatekeeping and making initiates somehow prove their racism or misogyny. Partially because of this gatekeeping and partially because the people who really get into this sort of thing tend to build their entire identities around it, racists’ homes become secret spaces of hard-acquired Confederate and Nazi memorabilia. They put special flags on their walls and special costumes in their closets, and in the Internet era, congregate in special forums to learn special in-jokes and secret codes.

BlacKkKlansman approaches racism less as a sinister evil that needs to be exposed and more as a group of nerds. They’re playing out a very dangerous fantasy, but the film spends most of its time making fun of them, because they’re nerds.

This is the one thing that really punishes racist and misogynist groups in media portrayals. Treating them like a serious threat, whether or not they pose one, legitimizes their power — and more importantly, it signals to anyone who’s feeling isolated and who hasn’t expressly committed to not being racist or misogynist that this is a way out. Entry-level misogyny – which is itself entry-level racism – espoused by pick-up artists specifically prey on young men who feel like outcasts, and the cycle begins from there. Portraying the KKK categorically as a bunch of losers undermines their ideology in a way that a formal refutation of racism never could.

For an in-depth look at why silliness is the most cutting response to racism in media, check out Lindsay Ellis’ spectacular video on the comedy of Mel Brooks. Also relevant to BlacKkKlansman’s portrayal of racists is her video on fascism in Disney Star Wars movies – watch the entire video, but skip to the 17 minute mark for the specific analysis on Kylo Ren and how fascism manifests in someone who doesn’t actually care about anything other than himself.