‘Superfly’ is sort of fly at times, but mostly forgettable 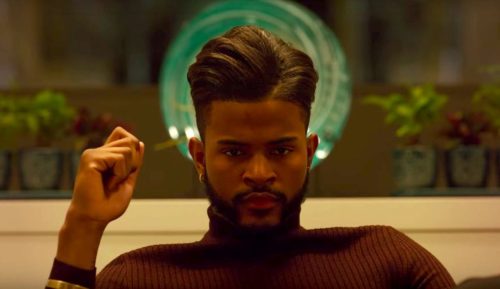 As much as I didn’t want to use this image, I think it’s kind of telling that it’s the only presentable one I could find. There’s certainly style present in the shot, but the colors aren’t working together and it just doesn’t pop. Jackson is trying to look pensive and failing while his hair does most of the acting for him. Much like the movie, I really want to like this still because it’s clearly trying, but it’s just no there. Image courtesy Sony Pictures Releasing.

3/10 I was really looking forward to Superfly, and my excitement was vindicated from the first shot to, I don’t know, maybe the end of the second scene. Those two are slathered in style that, for some reason, the rest of the movie almost completely lacks.

Youngblood Priest (Trevor Jackson) is a rising star in the Atlanta underworld, and it’s put a target on his back. When he’s shot at by a rival gang at the film’s outset, he vows to quickly find his way out of the drug trade, a goal he pursues by aggressively seizing control of cocaine traffic in the entire southeastern U.S. Maybe not the most direct path toward your stated goal there.  Priest is beset on all sides by the gang that is still at war with him, the cartel that supplies him and a corrupt, murderous police force.

While I initially got some really strong Luke Cage vibes with the dark, saturated colors and the smooth dialogue, the style doesn’t extend beyond the purpose-built sets. It’s certainly not in the camerawork. Director Julien Lutz – I’m not calling you Director X, fuck off – just doesn’t do enough to get the most out of these scenes.

The moment I stopped trying so hard to like Superfly was its lifeless, overlong sex scene. After an unremarkable plot point, Priest steps into his shower and his girlfriends Georgia and Cynthia (Lex Scott Davis and Andrea Londo) join him for probably the most joyless threesome I’ve ever seen. The camera lingers on Priest and these background decoration characters for a solid two minutes as they listlessly go through their various positions, carefully avoiding Priest’s and Georgia’s genitals while making sure Cynthia’s are conspicuously center frame – it’s never a good look when only some of the actors are down for nudity.

I don’t like sex scenes very much, but they can be a great point for a movie to impose its style. I remember a few years ago being really excited to see that The Raid 2 had explicit sexual content, I was genuinely interested and a little nervous to see what sex looked like in this grimy Indonesian world being shot and choreographed by absolute madmen. Well, I know what a sex scene looks like in Superfly, and it’s incredibly boring.

The engaging plot is built around the prideful desire to have it all, and the seemingly more specific concept of being “superfly.” It’s one of my favorite uses of a title in recent years. Priest’s main fight isn’t with his antagonists as much as the incompetence they represent. The snow patrol wants him dead for petty jealousy. His supplier Scatter (Michael K. Williams) ends up dead for betraying the cartel. The police, represented by just two corrupt narcotics officers, also end up nailed for their dumb-as-bricks extortion scheme just a few weeks into it.

Priest’s power comes from his intensive research of his business partners, which he uses for blackmail – in the first scene, he walks into an enemy’s club unarmed and soon has everyone in it at his mercy this way. He compares himself to God in his omniscience, but his world is dictated by the people around him and their inability to think things through. “It doesn’t matter how smart you are in a world of stupid mother fuckers,” he says at one point.

Unfortunately, this interesting dynamic throws Superfly into direct comparison with 2004’s Layer Cake, a much stronger film about the same subject matter. Check it out, it’s a personal favorite.

Overall, Superfly also reminds me a lot of another movie – Proud Mary, from earlier this year. It’s the story of an expansive crime saga with meaty themes about ambition and the nature of power stuffed into the body of a cheap blaxploitation flick that very obviously outsourced most of its action sequences to second units. As much as I want it to be great, it just isn’t.