Was that really a sequel to ‘The Incredibles?’

4/10 In 2004, after almost a full 10 years of redefining children’s media in the shadow of the Disney Renaissance, Disney Pixar released its magnum opus, The Incredibles.

Pixar had been making waves for years with media that struck a balance between approachability for young viewers and complex conflict for adults, but this movie was clearly on another level. It examined the tension created by exceptionalism within a group dynamic by examining superheroes through a cost/benefit lens and through Syndrome, one of the most recognizable and well-crafted villains ever put to film, all while sharply satirizing the superhero and super-spy movies of previous decades.

The film was hailed immediately and still stands as one of the best family movies, one of the best kids’ movies and one of the best superhero movies ever made, and even though Pixar had been making waves for years by this point, it, along with Wall-E and Up!, are generally remembered as the studio’s best offerings. Since then, there’s been a distinct dropoff in overall quality, and the studio’s traditional reluctance to do sequels has eroded – opening the door to the one sequel fans were desperate for, but still had to wade through a half dozen “Pixar sequels that aren’t The Incredibles 2” to get to.

Now, 14 years later, Incredibles 2 is finally here, and it is not good. It is very enjoyable, and everybody’s sure to have a good time. But it is not a good movie.

Picking up precisely where the first movie left off, Incredibles 2 follows the super-powered Parr family as they negotiate a world in which costumed vigilantism is illegal. Well, more illegal, I guess. 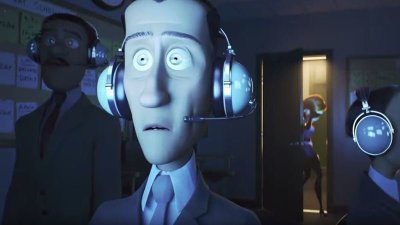 So obviously this movie comes with an epilepsy warning now after widespread complaints that the flashing lights associated with Screenslaver could induce seizures. The movie made $182.7 million, close to two fifths of the money it’s pulled in to date, in its record-breaking opening weekend before those warnings were posted. I’m not seeing any story about an actual seizure being induced watching the movie, fortunately.

The family is approached by Winston Deavor (Bob Odenkirk), a billionaire and superhero enthusiast who wants to push for costumed heroes to be legalized again. He asks Helen Parr (Holly Hunter) to resume her activities as Elastigirl, this time with a camera attached to her suit and more media availability, leaving her husband Bob (Craig T. Nelson) to watch over the children. Helen plays out a dreamy neo-noir plot against a mysterious mind-controlling foe, while Bob has a super sexist* plotline about how dads are worse parents.

The Incredibles had “no capes!” Incredibles 2 has an extended scene where a baby fights a raccoon.

The biggest thing that sticks out about Incredibles 2 is how eclectic it is. Instead of one strong theme supported by one well-written story, it waves at a handful of themes through several different plotlines and never really grasps any of them. The biggest way this manifests is through its dual storylines, which compete and distract from each other, made much worse by how quickly they are cut between. The first movie sticks mostly with Bob, but Incredibles 2 switches back and forth between him and Helen every two minutes like inmates arguing over the remote.

The first film sticking mainly with Bob and glossing over the child-rearing elements was absolutely not an oversight. Bob was much more the clear-cut protagonist of the first Incredibles, and the decision to stick with him strengthened his grip on the movie and also helped it fall in line with his own perspective. We are expected to take the Parr’s home life for granted because that’s what Bob does. His evolution over the course of the film is to let his family in, and they become more prominent players only after our main character makes that leap of personal growth – growth that Incredibles 2 ignores.

But the most prominent example of the film’s lack of cohesion is its villain, Screenslaver. Her point is that our society has become dependent on screens, to the point that they literally enslave us. How does that in any way relate to any other aspect of the movie? You could say it’s tangentially related to Deavor’s media empire, but we never see anything else on that media, it’s just background information on how he made his fortune.

*I just feel like typing this out – While the notion that women are better suited for parenthood is one of the few gender dynamics that can legitimately hurt men today, that notion is grounded in the idea that women belong in the home. The mother should be the one to take care of the kids because women are better suited for that, and the father should be the breadwinner – maintaining all the agency, social status and control that comes with it – because men are better suited for that, and any violation of this dynamic is just silly and doomed to fail. Any variation of this binary, even if it is formed entirely around the perceived shortcomings of men, comes part and parcel with the idea that women belong in the kitchen, barefoot and pregnant. So when I say basing an entire plotline around Bob failing where Helen has succeeded for years is sexist, I don’t mean it’s man-hating or “reverse sexist,” I mean it’s woman-hating, ‘50s era, “Go make me a sandwich” sexist.

It could have something to do with the way smartphones have developed into indispensable multi-tools since 2004, and we are in fact astonishingly dependant on them, but there are no smartphones in Incredibles 2. In fact, there’s no kind of 14 years later hook at all. Series writer/director Brad Bird said in revisiting the material that he didn’t want to do any kind of timeskip in order to avoid exploring Dash and Violet (Huck Milner and Sarah Vowell) as adults or introducing too many new superheroes, which is fine, but there’s also nothing at all that relates to or stems from how the world has changed in the past decade and a half.

Also, there’s a whole slew of new superheroes, about twice as many as there are old ones. They’re all collected by Deavor to be mentored by Elastigirl and sequentially introduced to the public when vigilantism has been legalized again. When that treaty is signed, there are ambassadors from all over the world, each paired with their own superpowered bodyguard, implying the existence of thousands of heroes internationally.

They also get into the queer iconography that’s woven into superhero movies, positioning Elastigirl as this new crop’s queer hero. It’s another interesting issue the movie picks up and drops.

With so much disharmony between the plotpoints and so little relating to the original film, does this even count as a sequel to The Incredibles then? This was a sequel that everyone had been excited about for 14 years, just seeing the same characters again in maybe some different outfits doesn’t satisfy that excitement.

It’s not enough for a sequel to just involve the same characters and be set in a similar world — it needs to be an extension of the same story. It needs to grow from and expand on the themes of what came before. Incredibles 2 does not. In fact, it seems to ignore much of the character growth experienced in the first film — less like a sequel, in which characters evolve, and more like the second episode in a TV show, where largely static characters are faced with new challenges every week.

After 14 years, is that really all we get?

This entry was posted in Entropy and tagged #disney pixar, #pixar, #the incredibles, #up, #wall-e, Brad Bird, Disney Pixar sequels that are not Incredibles 2, Incredibles 2, No capes. Bookmark the permalink.

1 Response to Was that really a sequel to ‘The Incredibles?’