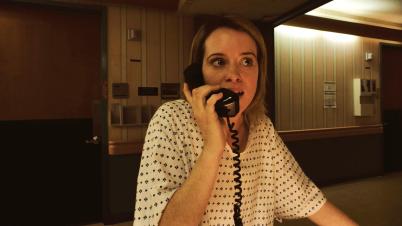 8/10 Steven Soderbergh’s quietly released Unsane already lost almost 100 screens from its March 23 release to its second weekend to Easter releases, and it will continue to drop out of theaters precipitously with an exciting April schedule on the horizon. That’s a sad thing, because this is one special movie.

After leaving Boston for suburban Pennsylvania after two years on the run, Swayer Valentini (Claire Foy) thinks she’s finally escaped her stalker for good, but her PTSD still prevents her from leading a happy life. She seeks help, but her therapist tricks her into committing herself as part of an insurance scam. Things go from bad to worse when Valentini discovers her stalker, David Strine (Joshua Leonard), has picked up a job at the asylum as an orderly.

It’s a wonderful meta-story. Victimized women are extremely likely to have their accusations shrugged off as exaggerations, often with dire consequences, and the trope of the crazy woman has been around pretty much since the inception of Western fiction. Unsane takes that narrative just a step further — where most women are simply called crazy, Valentini is institutionalized.

As the story develops, it becomes more and more of a twisted boy-meets-girl story dealing with the worst stereotypes of millennials raised on Disney-style romance. Strine is a neckbeard virgin — literally — who became obsessed with Valentini by watching, but never interacting with, her while she was at work who expresses his affection by breaking into her home with overtly sexualized gifts. Valentini is a stuck-up bitch whom the world forms around in such a way that you can hardly blame her — she’s constantly ogled and come onto, attention that she appreciates when she seeks it out but is driven up a wall by the constant presence of.

A lot of her problems are exacerbated because she doesn’t understand she’s in a horror film. She loses her temper at the wrong moments, she doesn’t look for attacks even after she should know where they’re coming from — she demands respect and decency as if she is not guarded by people conditioned to not take her seriously and stalked a predator who knows exactly how to press his advantage.

Foy and Leonard are both absolutely spectacular, and their scenes together, once he really has her cornered, are electrifying and brutally sad.

For the first several minutes, it’s unclear whether or not Valentini’s viewpoint is reliable. Part of me wishes Unsane had spent a little more time on this uncertainty, but the movie gets better as Strine’s threat becomes more clear.

This shot is a great example of the effect Soderbergh is getting from the cell phone footage — there’s a distinct fishbowl effect without anyone getting too warped, and you can see the sky completely blown out in the background. It’s an eerie effect and the cinematography is still spectacular.

Soderbergh also messes with the timeline a bit toward then end, but for no apparent reason. The movie cuts to a scene of police discovering the corpse from its climactic battle at about the halfway mark, and then the rest of it is linear. It feels like something that was left in the final cut by accident. I’m not even sure why the scene was shot.

The big deal technically with Unsane is that it was shot entirely on an iPhone 7. It’s not the first movie to be made completely with phone footage, though it might be the most high-profile. It’s not for budgetary reasons — at $1.5 million, Unsane had plenty for cameras — it’s because Soderbergh is on record as thinking that iPhones are the future of cinema and he’s going to shoot all of his movies on them going forward.

There doesn’t seem to be much of an artistic reason to have shot Unsane on a cell phone camera. It’s a creepy feel, there’s a lot of great claustrophobic fishbowl stuff in the footage, but there’s you couldn’t get with a wide lens and some post-production work. One thing that does really stick out is the way the lighting behaves — every shot in which the light is concentrated to one part of the frame has that washed-out effect as the phone camera automatically cranks the sensor up to make the darker parts of the shot visible. It’s very obvious that’s the way cell phone cameras behave, once you know what you’re looking for.

Then again, access to cell phones are a key element in the plot, and there’s even a character, Nate Hoffman (Jay Pharoah), who’s revealed to be an undercover journalist with a contraband cell phone. Maybe Soderbergh’s use of them as cameras makes the film a meta-documentary of this oppressive hospital, and the work as a whole a commentary on the power of modern information technology?

It’s not as farfetched as the idea that iPhones are the future of cinema.