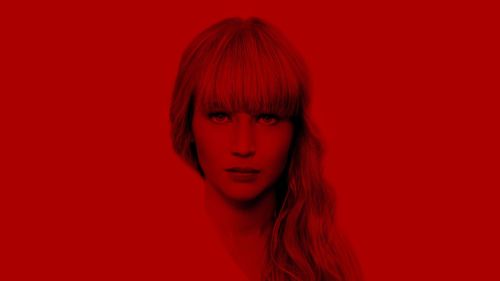 I normally go for stills, but this promotional image is much more interesting than anything in the movie. Images courtesy 20th Century Fox.

2/10 Red Sparrow started its existence in the public eye at a disadvantage, known primarily as a reminder of the Black Widow standalone movie that Marvel Studios will never get around to producing. Anyone who actually ventures into a screening will find pretty much the opposite of a Marvel movie, one filled with sex and gore and grimy colors and hefty themes.

That makes it sound like it might be pretty good, but it isn’t. Oh goodness, it is not.

Dominika Egorova (Jennifer Lawrence), a ballerina from Russia, suffers a gruesome, career-ending injury as Nate Nash (Joel Edgerton), an American spy, gets made. Egorova is forced into servitude for the intelligence agency from Russia as a sparrow, a spy trained specifically to use her body for espionage. Egorova is sent to Budapest to seduce Nash and discover his contact in the heart of the government from Russia.

Red Sparrow reeks of a poorly thought-out book-to-movie adaptation. It’s 140 minutes, exactly the point at which a producer would say is the cutoff, and it made some steep cuts to reach that length. Many scenes skip their establishing shots or their closing shots, leaving viewers with about a dozen separate cases of scene whiplash as they begin and end about 10 seconds before they should. Some scenes even seem to skip big chunks right in the middle.

It’s shocking to see such a poor film, particularly one with so many problems specific to a poor book-to-movie transition, from director Francis Lawrence — no relation — who handled the later Hunger Games movies with grace and panache. The movie rights for the original novel were sold for seven figures before it was published, and the fact that no one had read this before they determined to adapt it into a movie makes more sense than the other way around — the book is bananas. It’s reportedly about the mundane elements of spycraft, but also Egorova has synesthesia and is able to see how people are feeling through different colored auras, and also it’s a fucking cookbook with recipes at the end of every chapter.

A lot of that got thrown out the window — at no point does Jennifer Lawrence stop to give you her borsht secrets — but they kept too much of the plot and ended up cutting a lot of corners for runtime, and the movie still feels like it takes an eon. 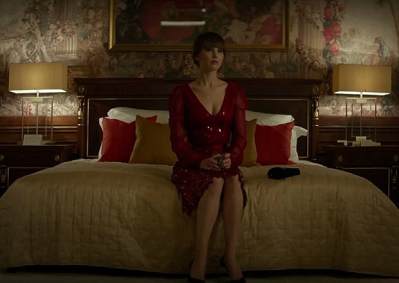 Ugh! Look at this! It’s shadowy and muddy and the colors are all bleeding into each other. Egorova’s dress should be cherry red here for symbolism purposes, but with the grading it’s almost brown.

Technically, Red Sparrow is muddy, ugly and often hard to see. With the exception of a wonderfully drunk Mary-Louise Parker, the performances are all flat. Lawrence, for all her charm, can’t seem to act and do an accent from Russia at the same time.

The first 30 minutes are particularly awful, but so are the last 20, and I can’t figure which is worse.

In the movie’s first act and training sequence — which I guess would be act 1B? The story structure is horribly awkward if you look directly at it — Egorova is sent to what she accurately describes as “whore school.” She is taught that her body is not her own — “your body belongs to the state” — and at one point is scolded for not allowing herself to be raped. Gen. Vladimir Andreievich Korchnoi (Jeremy Irons) chides her for potentially depriving the country she’s from of an operative over something as trivial as her virtue.

Red Sparrow is filled with sexual violence. Egorova has already been raped once at this point, and she eventually becomes a rapist herself — Nash explicitly does not consent to their first encounter.

Nobody wants to see this from a post-Weinstein Hollywood, even if it’s much more explicitly coming from a post-fappening Hollywood. The kindest and most interesting reading of this movie I’ve seen is that it’s Lawrence’s reaction to her prominent role in the 2014 iCloud celebrity photos leak, in which hackers disseminated hundreds of explicit photos of celebrities, mostly women, without their consent. Lawrence was one of the biggest stars in the world that August, with the media tour for The Hunger Games: Mockingjay just starting to ramp up, and it served her poorly when her name started appearing at the top of those particular headlines.

Lawrence was one of the loudest voices speaking about the hack explicitly in terms of consent. Months after her privacy had been stolen from her, she’d signed on to do this movie with the first on-screen nudity of her career and a metanarrative about her body being appropriated for the benefit of the masses. Just as Lawrence was told sexualization comes with the territory of being a female star, Egorova is told that being raped comes with the territory of being a female spy. Whatever catharsis the star takes from making Red Sparrow may be its only redeeming quality.

The film’s ending is a chaotic crescendo of double-crosses that is as completely incomprehensible as it is forgettable.

I could believe it as a stylistic choice for a club scene, but everything in the movie is like this. And look how the lights that do exist don’t dazzle like they should.

The plot leaves me bewildered for several different reasons at several different points, but there’s one burning question that sticks through the entire runtime — when is this supposed to be set? The grimy look and overt hardline communism scream late Cold War, but there are also indications that it must be set around 2013 when the book was published, but all those indications are isolated and immediately forgotten. The matron (Charlotte Rampling) mentions that Americans are obsessed with social media, one character has a smartphone and Egorova uses a Mac at one point, but all of those technologies completely disappear afterward. Social media and smartphones had a massive effect on spycraft, just like everything else, and this plot couldn’t possibly coexist with the modern Internet. A nationally renowned ballerina like Egorova couldn’t become a spy while Youtube exists.

Almost everything about Red Sparrow feels poorly thought through, but the anachronisms from a movie that clearly needs to be set in the late ’70s are its most annoyingly careless defects.

If you really need to see a movie that’s all about rape, I would highly recommend 2015’s Sicario. It doesn’t have any scenes that feel like they’re way too short, the colors aren’t awful, it’s got a clear setting and place in world history and there’s nobody from Russia.