Posted on February 2, 2018 by reelentropy 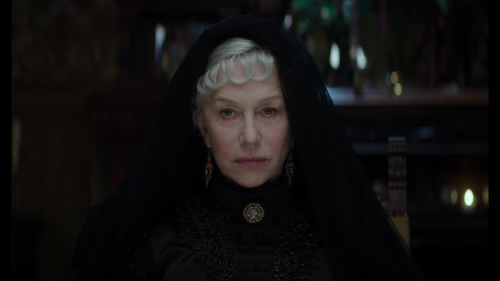 5/10 Winchester is wonderfully written and pretty cleverly directed, but gets major points off for its technical problems.

In 1906 San Francisco, psychologist Eric Price (Jason Clarke) has been driven to despair and drug abuse by his wife’s untimely death. He’s called back to action by the Winchester Repeating Arms Company, which fears for the sanity of its majority shareholder, Sarah Winchester (Helen Mirren).

Winchester too is in grief for the loss of her husband and child, but more pressingly, she is literally haunted by the spirits of people killed by her company’s weapons, which represented a major step forward in firearm technology in the 1860s. For the past 23 years, she has spent her monumental inheritance constantly building and rebuilding a mansion in San Jose to house them and bring them peace. The mansion is still considered one of the most haunted locations in the U.S. Price is sent to assess Winchester’s sanity, but soon learns that he was hand-picked for his own personal connection to the mansion.

Winchester tells an intricate personal story of grief and a prescient meta-story about culpability and gun violence, but even though most of its jump scares are well-done, it won’t satisfy anyone looking for a horror fix. The ghost effects are simply cut-rate, and it has some pretty obvious sound design problems. These don’t really get in the way of the story, but they do clearly necessitate Winchester being set aside for an early-year release where it can be panned in obscurity while Oscar debates eat up most of the print space and last December’s blockbusters continue to dominate the box office.

Once you get past the half-finished monsters executing surprisingly clever jump scares, there’s a terrific movie here couched in the dynamic between Winchester and Price. In a film that many would consider beneath her, Mirren is spectacular as she softly walks the line between sanity and dementia.

Stepping further back, the movie locks antlers with the huge issue of gun violence and the culpability of arms manufacturers. While Alfred Nobel invented dynamite as a mining tool and was famously distraught by its military applications, Winchester notes that she cannot have the same regret with any degree of intellectual honesty, since her company’s products were designed explicitly for killing. The firm anti-gun stance from a woman who sits on a fortune made with guns flies directly in the face of modern arguments from the National Rifle Association.

Perhaps nothing could illustrate the hypocrisy and dissonance surrounding the gun debate better than Winchester‘s main antagonist, the spirit of Benjamin Block (Eamon Farren). Block was a Confederate colonel who lost both of his brothers to Winchester-wielding Union soldiers — the Union’s better access to the Henry Rifle’s unique ammunition while the Confederacy was stuck with muzzle-loaders was a major factor in the Civil War. Moving right past the war itself and instead blaming the company that supplied it, in his final act, Block massacres 15 patrons and employees of a Winchester gun shop, an act he was only able to carry out with — you guessed it — his very own Winchester repeater.

It’s sad to see such a meaty story cast away like Winchester is, but at the same time, the movie is tough to actually recommend. I don’t wish the movie were getting more attention nearly as much as I wish writer/director duo Peter and Michael Spierig had simply had a better job during production and made sure the details were on par with the bigger picture.