Posted on January 9, 2018 by reelentropy

7/10 The Post is much more challenging and nuanced than expected, but it ultimately falls short of its ambitions.

In 1971, the New York Times drops a bombshell — according to a leaked study that would become known as the Pentagon Papers, the Vietnam War was not a noble effort to help the South Vietnamese stave off communism. In a conspiracy going back decades and spanning five different administrations, presidents had secretly escalated tensions and broadened the scope of action in Vietnam and systematically lied to Congress and the public about it.

After releasing three articles of their five-part series, the Nixon administration files and injunction prohibiting the Times from publishing further. Washington Post and Times-Herald editor-in-chief Ben Bradlee (Tom Hanks) is desperate to find the papers and continue stories on them with his own publication. When he does, he forces publisher Kay Graham (Meryl Streep), who inherited the organization from her late husband and has no real business running a newspaper, in a position where she must actively defy the federal government.

The Post constantly groups men and women together in the scene and then forces Graham into the men’s circle, whether she wants to go there or not. It’s an interesting graphic story for an interesting, relatable character nervously backing her way through glass ceilings.

Where newspaper classics All the President’s Men and Spotlight focus on the swashbuckling adventurism of reporting, The Post is zeroes in on journalistic ethics, specifically the uncomfortable half-personal half-professional relationship between reporters and sources. Bradlee was a close friend of Harvard schoolmate John F. Kennedy, who is implicated in the Pentagon Papers. Bradlee feels that his friendship with Kennedy, and other journalists’ friendships with Dwight Eisenhower and Lyndon B. Johnson, are what allowed them to lie to the public for so long, and his quest to find the papers is one of burning guilt.

For her part, Graham has grown up the daughter of The Post’s founder and known defense secretary Robert McNamara (Bruce Greenwood), who initially commissioned the study, for years. His willingness to abuse their friendship for positive coverage and her reluctance to abuse it for access to the papers plays a major role in the plot.

But cross-company friendships aren’t all bad in The Post. Reporter Ben Bagdikian (Bob Odenkirk) finally gains access to the full study because he had the insider knowledge to guess that military analyst Daniel Ellsberg (Matthew Rhys) was the initial leak, and was able to get in touch with him.

This kind of contradiction also comes up in what was advertised as the film’s main storyline, one of Graham overcoming the powerful men who oppose her decision. The movie does a wonderful job of telling this story graphically — in a particularly ominous shot, Graham ascends a staircase surrounded by women, all of whom appear to be secretaries, into the dark, smoke-filled New York Stock Exchange, filled exclusively with old men who loom over her.

But narratively, Graham is anything but a strong character. She goes back and forth on the decision to publish like a cat deciding whether or not to go outside, before ultimately yielding to the judgment of the film’s most powerful man — Bradlee. She goes from being yelled at to the one doing the yelling, but a feminist icon she is not. 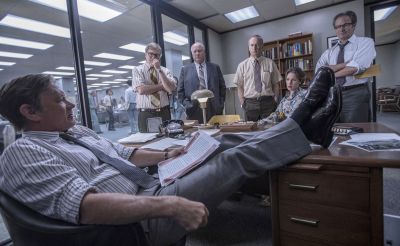 Hanks, who I’ve never thought lived up to his reputation, gives a sterling performance as Bradlee. His gung-ho, grim optimism and terrible haircut make him feel every inch like the journalist he’s portraying.

I can’t help but see a number of ways The Post could be better. A heavier, more consistent focus on Graham, with McNamara and maybe even Bradlee taking on the roles of more direct antagonists. Do more to capture the guilt associated with the Vietnam War, sending an entire generation to die for what they would discover was no real reason. The recent advent of TV news had already contributed mightily to the war’s unique place in history and to the shifting role of the media, which the story is already about anyway.

Director Steven Spielberg supposedly signed onto this movie as soon as Donald Trump was elected, forseeing that there may be another federal attempt to muzzle the press soon, but I didn’t believe for a second this wasn’t conceived after Spotlight’s surprise Best Picture win in February 2016. The reality turns out to be a little of both — the script, written by Liz Hannah and Josh Singer, who co-wrote Spotlight with Tom McCarthy, was completed and won in a studio auction in October 2016, meaning it would have been started soon after the Oscars, and Spielberg signed onto the project in February 2017 after a hole opened in his schedule.

Soft on its themes and lacking a shadow-drenched anonymous source or a real focus on the characters who wanted the coverup to remain in tact, The Post comes out the other end as kind of boring. It’s pretty disappointing given the talent and thought that went into making it, much less than the sum of its parts.

One more point of discussion — spoilers below

After the plot is resolved and the newspapers are ruled free to publish, there’s a scene dramatizing Frank Wills reporting a break-in at the Watergate Hotel, an event that took place more than a year later, which lead to the unraveling of the Nixon administration over a two year period, thus establishing The Post’s place in the National Scandal Cinematic Universe.

We don’t need epilogues. If your movie can’t stand on its own without the context of other stories — which The Post absolutely can — then you need to make a better movie. Just, stop!

This may seem like a minor thing, but it sets kind of an uncomfortable precedent. With the MCU and to a lesser extent Star Wars, Disney has made continuity scenes into very common things. They’re frivolous annoyances in those movies put there to reward the most faithful fans, but in The Post, we have a continuity scene that seems to have been placed there because someone on the creative team thinks that scenes like that are actually enjoyable on their own merit. It’s highly disturbing to see non sequitur pipe-laying like this to in a movie that is fishing more for Oscars than sequels.