‘Fate of the Furious’ is solid 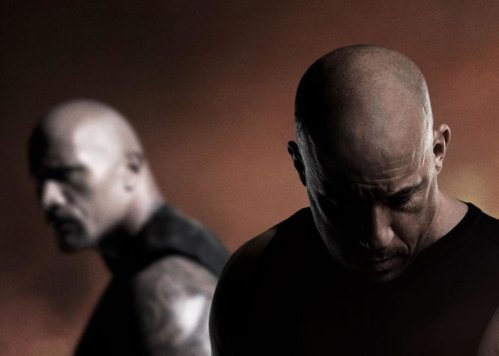 7/10 Remember when these guys were just stealing Playstations?

In Fate of the Furious, after 30 disposable minutes of honeymooning and little league soccer, Dominic Toretto (Vin Diesel, who also produces) inexplicably betrays his team, stealing an EMP device and landing Luke Hobbs (Dwayne Johnson) in German prison. The gang learns from their super-secret government buddy, Mr. Nobody (Kurt Russell), that Toretto is now working with a super-dooper-secret cyberterrorist called Cipher ( Charlize Theron). They band together with the last movie’s villain, Deckard Shaw (Jason Statham), to take Toretto down.

There was some question as to whether Furious 7 would be the tentpole franchise’s last entry after Paul Walker’s untimely death in 2013. While that movie did a frontside 540 jumping the shark, it’s nice that it wasn’t the end. It’s nice to return to this strange, physics-free but undeniably fun universe of wildly overambitious set pieces, half-filled plotholes, deceptively strong characters and so, so many butt shots.

The plot feels like something a 5-year-old who watches too much CNN is making up as you’re watching, but at the same time, it’s kind of great. Toretto gets to show off that nasty mean streak that made his character stand out in the first place, and its set pieces are right up there with “dragging a bank vault through Rio.” And since these movies make all the money in the world, they can bring in legends like Russell, Theron and Helen Mirren for bit parts.

The Fast and/or Furious movies are known and shielded from criticism as dumb action movies, but they’ve never really been that dumb. They can get a bit soap opera-ish — “Family” this and “Family” that with a little amnesia thrown in — but the framework is there to care about most of these people, and Fate carries that torch. Hobbs and Letty Ortiz (Michelle Rodriguez) have solid internal conflicts for viewers to get into.

Probably the most deft thing the movie does is introduce a new character, dubbed “Little Nobody” (Scott Eastwood). He’s a blank slate for characters to re-establish themselves against for new viewers, and he allows the movie to delve deeper into Mr. Nobody’s cloak-and-dagger shtick without taking more than a few days of Kurt Russell’s time. 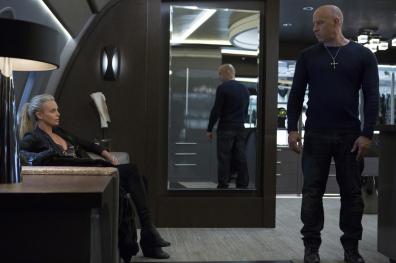 So, Cornrows Cipher has a private jet that can’t be traced and never needs to refuel, and she can take control of apparently every car in New York at once, but she needs nukes? Why?

The movie has its flaws, and they’re as obvious as they are hindering. The first half hour or so should have been cut. It doesn’t service the plot, all the characters it introduces get re-established anyway and, most importantly, it undermines Toretto’s betrayal by establishing that he’s being coerced. It dampens the movie with predictability, knowing that he’s not making his own choices — no matter what the behavior theory-obsessed Cipher has to say on the topic. It also enables the movie to keep its mostly easy-going tone despite Toretto’s betrayal, which was the wrong track to take.

The Fate of the Furious could use that lopped off time to double down on its action scenes, all of which contain several shots that need to be just a split-second longer to work. Despite a 136 minute runtime, it’s full of decent action sequences that are just a few seconds away from spectacular — which is an adequate description for the movie as a whole. Linger longer on orienting shots or the more impressive stunts. Pause and let the audience awe at the nuclear submarine bursting through the frozen bay. Don’t treat it like it’s old hat.

It’s kind of strange to think about Fate of the Furious’ place in the world. It’s the eighth installment in a franchise that broke the billion dollar mark its last outing, but all that money can’t possibly come from a reliable, built-in audience. If that existed, it’d probably show up for Diesel’s or Johnson’s other projects. No, the simpler answer is, on any given weekend, there’s hundreds of millions of dollars worth of people who go for big car-themed set pieces. The movie is half-in, half-out as far as which of these viewerships it’s playing for.

The Fate of the Furious is a strong story not-so-strongly told with strong action directing undermined by some choice editing decisions, but not nearly to the point that it actually becomes bad. It’s a little on the silly side, but hey. It’s a dumb action movie.

1 Response to ‘Fate of the Furious’ is solid