‘Moonlight’ unexpected and strange, make time to see it

Posted on January 5, 2017 by reelentropy 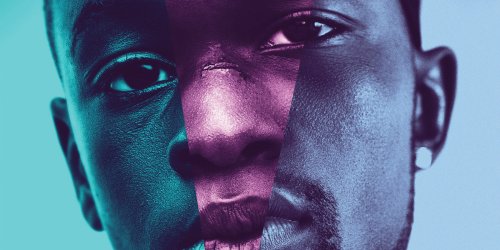 I had different things going through my head during Moonlight, ranging from sadness to sympathy to “What the fuck?” I’m guessing the filmmakers wanted me to feel that way, but if you go in without knowing anything about the plot, you will probably have a similar experience.

Moonlight is about Chiron (pronounced “Shyrone”), a disturbed and sexually confused young man who tries to find his identity in an environment full of people who hate him for existing. Chiron (played by Alex Hibbert as a child, Ashton Sanders as a teen and Trevante Rhodes as an adult) suppresses everything about himself he dislikes for fear of increased chastisement. The film takes place during three stages of Chiron’s life, named “Little,” “Chiron” and “Black,” respectively. At the beginning of the movie, Chiron is a small, sad child who has trouble opening up with people. The problem worsens as he ages. His mother, Paula (Naomie Harris), is a drug addict, he is constantly bullied at school and he discovers he is gay.

It is excellent for a movie like this to even exist. Even though certain characters act like stereotypes, namely Paula and Chiron’s bully Terrel (Patrick Decile), writer/director Barry Jenkins and team made a movie that was just about regular people, featuring an all-black cast. Yes, they live in an urban ghetto, and the kids in the first two acts of the movie attend a substandard school, but Moonlight is about an Everyman character finding his identity through his sexuality, his surroundings and his happiness. Most of the characters were intelligent and had shreds of humanity. The homosexuality seemed out of place at first, but was always treated with seriousness.

The performances in Moonlight are some of the best of the year. Harris, Mahershala Ali and Rhodes are getting the most love in terms of awards, but everybody is enthralling. It’s rare to see a movie with more than a dozen child and teenage actors who get dialogue, and they sometimes do better jobs at showing emotion and delivering their lines than the adults.

Nicholas Britell also composes a fantastic score, which sounds like something you would expect to hear in a world-class movie.

The cinematography makes this one of the best-looking movies of 2016. The constant use of shallow depth-of-field, as well as the various shades of blue and purple, makes the visuals spellbinding.

Moonlight is one of 2016’s major award favorites, alongside La La Land and Manchester by the Sea.

The visual storytelling also makes one stage of Chiron’s life reflect another. Sometimes, this makes the audience more involved. At other times, it feels self-indulgent. Moonlight also goes out of its way to showcase video portraits, make certain scenes silent except for high-octane string music and focus on a specific character or object to make a shot look like a moving photograph, without the need to make all of these choices justified.

Moonlight contains other flaws as well. Its biggest weakness is an inconsistency from having an ethereal tone at the beginning to a grounded one at the ending. If the movie had been as mystical at the end as it was at the start, this could have been a great movie, but the weaknesses in some of the aesthetic choices, especially in the third act, make Moonlight just a good movie.

This is an artistic movie, with spirituality pumping through many of its veins. Throughout the course of the movie, the characters seem like they are going to build up to something more than they could have ever dreamed about themselves. In “Little,” Juan (Ali) tells Chiron that he has to make his own way as a man — nobody else can make decisions for him –despite Chiron being a child. The movie teases that maybe Chiron will not fall into the same trappings as his mother, Juan or Kevin (Jaden Piner, Jharrel Jerome and André Holland). He does, which makes some of the artistic decisions, as well as the spiritual messages, feel cheap. Some of Chiron’s choices were obviously done to make the movie more realistic, but how is the audience supposed to feel after watching scenes like the ones in which Chiron and Juan bond, or his first sexual experience?

Moonlight was strange in ways that were unforeseen and in ways that keep it from achieving its full potential. However, if you want to watch an original work of art that features a cast who gets to play characters with depth, and do the characters justice with how they play them, then go see Moonlight.