‘Nocturnal Animals’ gets you your visual storytelling fix 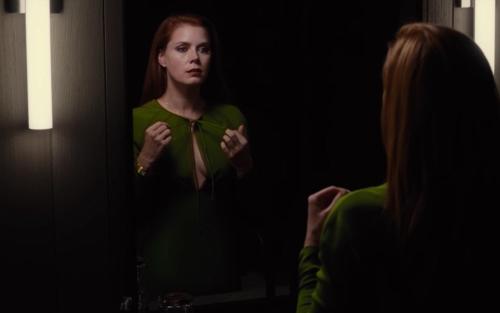 If you are not just a fan of great acting and writing, but also appreciate the use of lighting and color to produce top-notch visuals — the kind that should be the norm and not the exception — Nocturnal Animals is the movie for you.

Art gallery owner and insomniac Susan Morrow (Amy Adams) receives the manuscript of an upcoming novel written by her ex-husband, Edward Sheffield (Jake Gyllenhaal), which is titled Nocturnal Animals after his nickname for her. One evening, she begins reading the novel, which gives her flashbacks of her time with Sheffield, as well as her overbearing mother, Anne Sutton (Laura Linney). She reads the novel on-again, off-again, continuing to have flashbacks. She is impressed with his writing, and tries to meet with him.

The movie itself, though, is actually about reflections.

Morrow imagines Hastings to look exactly like Sheffield, because both have oversensitive, bordering on weak, personalities. From Morrow’s point of view, Sheffield is delicate and indisposed. He had been trying to become an author since before the two even started dating and always took her constructive criticism personally. She sees these personality traits in Hastings, who suffers a violent tragedy at the hands of three criminals.

Also, Morrow hates being compared to her mother, who she describes as homophobic, racist and sexist. In one flashback, Morrow is having a conversation with her mother over dinner. She tells her mom she is going to marry Sheffield, no matter how many times Sutton says he is too romantic and sensitive to handle Morrow.

This might seem like a typical conversation a mother has with her rebellious daughter, but writer/director/producer Tom Ford and team clearly know what they are doing.

Morrow, a little insecure because she already sees certain traits in her that mirror her mother’s, openly denies her degradation. However, she is revealed as more realistic and materialistic by the final flashback scene, giving up her dream of becoming an artist and leaving Sheffield for fellow art student Hutton Morrow (Armie Hammer).

Ford, the movie’s true hero, is also a fashion designer. He clearly took his visual art sensibilities and applied them to Nocturnal Animals, using clothing, color, makeup and carefully-calculated camera work to move the audience from one scene to another, while also using the visuals to introduce certain qualities for each character. His superior script, based on the 1993 Austin Wright novel Tony and Susan, complements the visuals.

During the dinner conversation, Morrow is wearing a black outfit with a small, gold necklace. She’s also wearing dark makeup, as she does throughout the movie. Sutton is wearing a white outfit with three giant, gold pearl necklaces. This is one of the ways in which Ford and team use the visuals to parallel one character’s traits with another’s. Morrow currently looks different from her mother on the outside, but eventually becomes just like her.

This also comes across brilliantly in Adams’ subdued performance. She does a splendid job of showcasing the anxiety and exasperation one feels from lack of sleep, while also going back and forth from softly speaking to talking with normal volume.

Everybody gives a superior performance, with some playing roles they do not normally touch, mainly Aaron Taylor-Johnson. Taylor-Johnson plays the novel’s central, condemnable villain. The performances he, Gyllenhaal and Michael Shannon give make you feel like the characters in the novel are as real as the ones in the frame narrative.

Ford and team cleverly balance multiple stories, bringing them together by the end of the movie for an experience worth more than the price of admission.