Hands of Stone is an affront to history, filmmaking

Hands of Stone is a new biopic out of Cannes about legendary Panamanian boxer Roberto Durán (Édgar Ramírez, David Arosemena as a child) and his just-as-legendary trainer, Ray Arcel (Robert De Niro). The film covers his early life growing up in the slums of Panama City and the beginnings of his boxing career, through the “No más” fight against Sugar Ray Leonard (for some reason, Usher) and his comeback two years later.

Hands of Stone is one of the most poorly written and edited movies I have ever seen. It’s a cluster of approximations of scenes you’d expect to see in a typical, plain-jane boring boxing movie. This movie feels like Rocky as described by Donald Trump’s unintelligible stuttering — most of the information is there, but everything is garbled and in the wrong order. If you’re paying attention, you can get a vague sense of what the movie was trying to convey, but that carries with it the idea of how much better it could have been done.

Also, the “true story” focuses on its least true elements, it treats women horribly and it feels really, really racist.

Nowhere is the film’s horrifying inability — outright refusal — to convey information more apparent than the boxing scenes. The real-life Durán held world titles in four different weight classes and boxed professionally until he was 50 years old, yet I left this movie feeling like I hadn’t seen a single fight. These scenes are unrelated, sloppily cut together snippets of boxing with a jumble of quotes from the announcer laid over them. It’s visual and auditory cacophony that seems designed to be a timeskip, but lasts for several minutes. The amount of time the film spends on this circus of information — in each case, this happens three times — could easily have been used to create an actual scene. 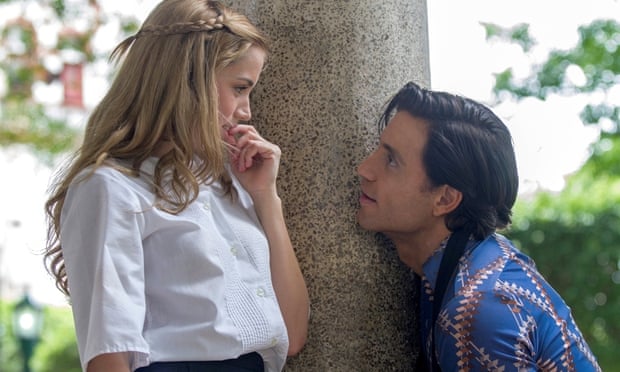 This isn’t the product of ineptitude. This style is consistent throughout. Writing, directing and producing, Jonathan Jakubowicz clearly brought his vision for this movie to life, it’s just that vision is unwatchable. He hasn’t made a movie since 2005’s well-received Secuestro Express, and these are the only two features he’s worked on, so I’ve really got no idea what’s going on here. What has he been doing the past decade? Who funded this project to be written and directed by someone who hasn’t made a movie in 10 years? Why?

Also recalling Trump is that the story may have facts in it, but is entirely misleading. Hands of Stone takes an extremely nationalist view of its events, tying Durán’s career to negotiations over the ownership of the Panama Canal. It sets him as a symbol of Panama and Leonard as a symbol of the U.S., and lingers on the idea that Durán walking into Madison Square Garden for the first time — he’d fought at the Garden six times by this point — and beating Leonard where he’d won Olympic gold four years before — the 1976 Olympics took place in Montreal, as did Durán and Leonard’s first fight — would mean the U.S. would relinquish control of the Canal, which they’d already agreed to do.

This plot element also includes several minutes focusing on Durán growing up in Panama City, staring at the Canal and developing a hatred of America while stealing to eat and learning to fight. This is the most intriguing part of the movie and the part that would have been most elevated by sensible editing and a halfway decent script, despite focusing on a stupid little kid who can’t act. In context, though, it somehow manages to undermine even this low of a film by showing that Durán was always a cocky asshole and precluding anything resembling a character arc.

While it’s true that Durán developed a resentment toward the U.S. during this time period, implying that it’s the entire reason he fought is taking things way out of proportion. This may seem like a fudging of the details, but the movie makes these details its main thrust.

Why? Why not get an actual actor for this?

The way the film treats its female lead, Felicidad Iglecias (Ana de Armas) can only be described as gross. They dress her up in a highly fetishized school-girl outfit, then have Durán stalk her for a couple of scenes as wooing. In their first scene, he catcalls her and then grabs her off the street and forces her into an alley, and in the second, he waits for her after school and follows her home. This is Hands of Stone’s version of romance. For the rest of the movie, she exists only to shoot out babies, be yelled at and feature in lengthy, grotesque sex scenes.

This sort of love subplot is typically added into a movie to appeal to women, though the movie’s nature as a biopic complicates that somewhat. Harvey Weinstein has said the movie is testing well with women — and is testing well with Hispanic, black and older audiences who can remember Durán at the height of his fame — and they’ve taken that as reason to give it an utterly bizarre release pattern. The movie was supposed to release last weekend, but at the last second, The Weinstein Company dialed it down to 800 theaters to generate word-of-mouth, hugely important to older viewers, and pushed the 2,000 theater expansion to today, so they can still take advantage of Labor Day weekend.

There’s no telling how that’ll work out in the long run, but if it’s word of mouth they’re banking on the Rotten Tomatoes score of under 50 percent doesn’t bode well. And that’s much more than this movie deserves.