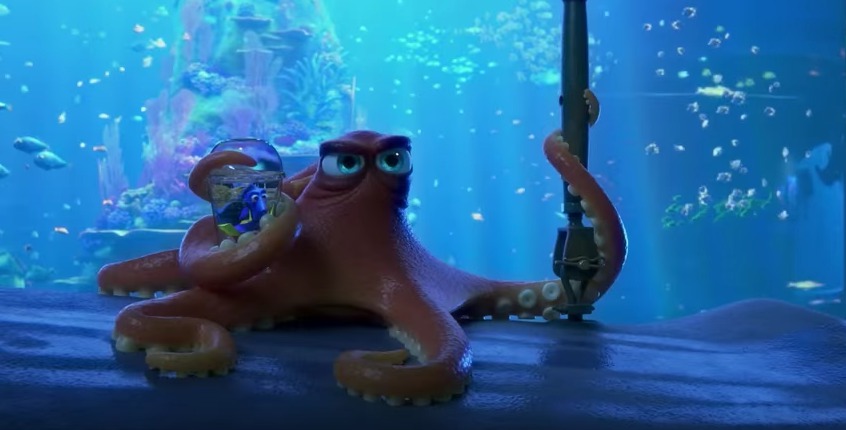 That octopus is a scene-stealer, but he’s got nothing on baby Dory. Seen in flashbacks, the young dory is the most adorable thing Pixar’s ever animated, with eyes bigger than her entire body and a squeaky voice (Sloane Murray and Lucia Geddes) to deliver the same stream-of-consciousness lines. Photo courtesy Walt Disney Studios Motion Pictures.

Time for another Disney Pixar sequel that isn’t The Incredibles 2.

Finding Dory takes us back to the Great Barrier Reef where Dory (Ellen DeGeneres) has made her home with Marlin (Albert Brooks) and Nemo (Hayden Rolence) for a year since their adventure in Finding Nemo. Dory famously suffers from short-term memory loss, but out of nowhere, she remembers where her family is and scrambles to go to them. The problem is, they turn out to be from the Marine Life Institute of Morro Bay, Calif., all the way on the other side of the Pacific Ocean.

The length of the journey is weirdly overlooked by the film, which spends most of its time with the principle characters having gotten out of the ocean and into the Marine Life Center’s quarantine. There, Dory meets Hank (Ed O’Neill), a hard-boiled octopus sneaking around the park. Most of the movie consists of him carrying Dory around in a coffee pot full of water.

Disney Pixar movies break down into two rough categories — emotionally resonant instant classics and Cars spinoffs. Finding Dory is decidedly the former. It’s got the same It factor that Pixar has been able to manufacture time and time again, pulling at my heart with the same irresistible leash the studio did with Finding Nemo, Toy Story and Up. Everyone seems to be ready for the empire to fall, and it’s become in vogue to point at the studio’s newfound affinity for sequels and prequels as evidence of that, but movies that are less than excellent are still the exception.

I would have preferred The Incredibles 2, but that’s not fair. Finding Nemo is a beloved, enduring classic that broke $300 million domestically in 2003, and the 2012 3D re-release made another $40 million. It was the highest-grossing G-rated film of all time until Toy Story 3 took over in 2010, and it is the single best-selling DVD of all time with more than 41 million units sold — and since Blu-Ray has taken over as the dominant home video format, that’s a record it should hold forever. Pixar may have strayed into the Hollywood mess of sequels and spinoffs with the Cars franchise — something they get way too much flack for, as they never stopped producing quality original works like Wall-E and Inside Out — but this isn’t part of that. This is a sequel that was made for the right reasons and also one most people really were clamoring to see.

And clamor they have.

Finding Dory set the record for largest single day for an animated release yesterday at $54.9 million. It was already cruising to something in the $125 million range, which would beat Shrek the Third’s animated opening weekend record of $121.6. With that spectacular Friday, Dory could now be looking at as much as $145 million this weekend alone.

If you’re not a part of that record, I’ve got no idea why. It’s Pixar. It’s appointment viewing. Go see it.

This entry was posted in Entropy and tagged #albert brooks, #disney pixar, #findingdory, #inside out, #up, #wall-e, a whole lot of records, Cars, Ed O'Neill, Ellen Degeneres, finding dory, Finding Dory is fantastic, Finding Nemo, I like sand, I like shells, Pixar is still the king, records, Shrek the Third, The Incredibles 2, Toy Story. Bookmark the permalink.