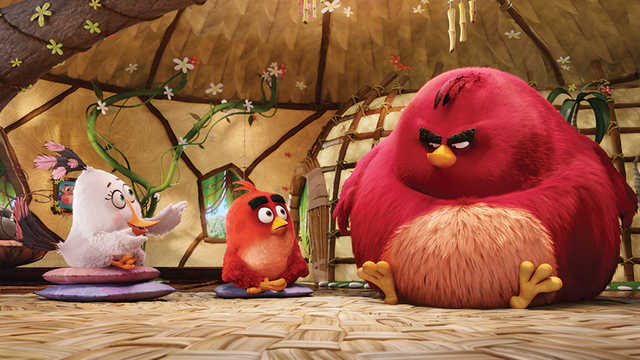 Everyone’s cynical about the bevy of talking animal movies coming out right now, but for its part at least, The Angry Birds Movie is fantastic.

The movie follows Red (Jason Sudeikis), a robin who can’t control his temper and is sent to court-assigned anger management classes, where he meets the other primary projectiles from the video game — Chuck (Josh Gad), Bomb (Danny McBride), class leader Matilda (Maya Rudolph) and Terence (Sean Penn). The classes don’t go well, but bird life is interrupted when a small army of pigs, lead by Leonard (Bill Hader), arrive on avian shores. The pigs initially say they come in peace, but Red discovers technology on their boat that makes him suspicious. Together with Chuck and Bomb, they climb the central mountain of Bird Island to seek wisdom from Mighty Eagle (Peter Dinklage), the birds’ ancestral protector.

The main thing everyone worries about with kids’ movies, and really the only way such movies can go wrong, is that they’ll condescend to their audience, giving the adults nothing to chew on and the kids nothing to take away from it. Angry Birds is an entire slingshot away from these pitfalls.

The humor in the movie is so high-brow and so full of adults-only references to Fifty Shades of Grey, The Shining and more that you start to wonder if the kids will laugh at all. The pacing is break-neck, but not rushed, to the ends of a 97 minute runtime that feels like a satisfying serving of film but is also the perfect portion for children. From a by-the-numbers perspective of where to put the action scenes and how long the movie should be, Angry Birds is very much for everyone.

What’s really remarkable about this movie, though, is its subtextual depth. Red lives on a small island of birds who aspire to live a conflict-free life. In this culture, anger is viewed as an inherent detriment — if you want there to never be any conflict, getting mad is obviously not something you can allow people to do. But with this aspect of the story, the movie raises poignant questions about the usefulness of anger and what conflict really is.

Abstaining from any form of confrontation, the birds can’t exactly cast Red out, but that’s exactly what they do by hiding behind passive-aggressive bullying tactics. Even outside of that, Red has good reason to get angry — birds sneeze in his popcorn, they continually bump into him in lines — there is already tons of strife in this society, and everyone else fits in by turning a blind eye to it. Red is constantly being put in positions where he needs to stand up for himself, but will be viewed as the aggressor if he does.

The movie also has a lot to say about xenophobia and suspicion of newcomers, and these aren’t particularly good messages. Red is immediately suspicious of the pigs, and he goes to great lengths to prove their nefarious intent. This could be because they crush his house when they arrive on bird island, but given what’s going on in the presidential race right now, portraying a new race of people coming in as a bad thing may not be in the best taste.

Angry Birds’ most poignant lesson, however, is through Mighty Eagle, a representation of national post-Cold War self-satisfaction. It’s a mouthful, but it’s really not a stretch. The bird is a bald eagle, for one thing, and for another, all the other birds are taught to sing songs about him in school and that the reason they don’t need to fight is he’ll always be around to “protect their liberties.” However, when Red, Chuck and Bomb reach him on his mountain, they find a bird obsessed with the past, specifically 1970s pop-culture. He takes pride in his distinct dad bod and still thinks his disco moves are stylish. He oscellates between showing the main characters how cool he was 30-40 years ago and reminding them the ways they were taught to worship him in primary school, but in the end does nothing to stop the pigs. The ultimate lesson is to not trust authority, and specifically to not trust the heroes and ideologies of the past with the problems of the present.

Leopold Knopp is a formerly professional film critic, licensed massage therapist and journalism student at the University of North Texas. I’ve had a change of heart in regard to reader input. It is now welcomed and encouraged. Like Reel Entropy on Facebook, follow it on Twitter @reelentropy, and shoot questions to reelentropy@gmail.com.

1 Response to Angry Birds is a fun, deep kids movie