10 Cloverfield Lane centers on Michelle (Mary Elizabeth Winstead), who is rescued from a one-car accident by Howard Stambler (John Goodman). However, instead of a hospital, Stambler takes Michelle to his underground bunker and holds her there, telling her that a weapon of mass destruction went off while she was unconscious and he decided to let her stay in his fallout shelter for the next year or two, along with Emmet (John Gallagher, Jr.). Not believing Stambler’s story, Michelle unsuccessfully tries to escape, starting a game of cat-and-mouse that lasts almost the entire film.

Most movies break down easily into a three-act structure — act one introducing characters and conflict, act two playing that conflict out and act three sussing out the results — but more and more, we’re seeing movies that actually have several completely separate conflicts. This isn’t unheard of in road movies or poorly thought-out sketch comedies that deal heavily in temporary characters, but it’s happening much more often outside those genres, and 10 Cloverfield Lane is one such movie that is functionally three separate conflicts told as acts instead of individual stories. However, this is one of the first movies I’ve seen where this narrative structure really works well, and that’s because of the great overarching philosophical conflict that ties the stories together.

This is the type of visual that makes the first part of 10 Cloverfield Lane so arresting. The movie leaves this story to focus more on higher concepts, and that’s a shame to some extent, as a feature-length version of this would be a fantastic film.

We’ll get into that in a bit, but it’s important to understand this movie as three different stories because of how starkly the style — and quality — changes from segment to segment. First-time director Dan Trachtenberg gets huge points for how well he recognizes what’s going on in the script and filming it accordingly.

The first segment, as Michelle frantically tries to escape, is a masterpiece of claustrophobia and paranoia. It’s a steady diet of shots of Stambler hovering behind Michelle, controlling her in the frame and giving him this great predatory vibe. The shots really get dynamic, though, in the dialogue scenes. One of the things that distinguishes good movies and directors from bad ones is the ability to shoot dialogue, an essential part of every movie but also one of the least cinematic things imaginable, and 10 Cloverfield Lane is a clinic of nail-biting, intense dialogue scenes.

Trachtenberg can’t have all the credit, since it’s impossible to create dramatic dialogue scenes without terrific performances, and this movie delivers on those. Winstead is electric in her character’s desperate, almost elemental scramble to survive. Goodman is haunting, and takes over the movie with what should go down as his best performance. His character is creepy in an almost autistic way, and becomes both more and more monstrous and more and more tragic as the film goes on.

In the second segment, things begin flag a little. This consists of a much more simmering conflict than the first, and while some scenes are just as intense, it’s not quite as consistent throughout. The characters all get some personal space in this segment, and it generally reduces the trapped and stalked feel of the movie.

The third segment, however, is where things really start to go downhill. It’s a completely different style of movie at this point, with heavy use of shaky cam and big, dramatic visuals and  music. This segment is actually pretty decent out of context, but as a cap on the intense slow burn that precedes it, it’s too much too fast. If they could have cut this sequence in half, or thereabout, and crossed off some of the more audacious ideas, it would have played much better. 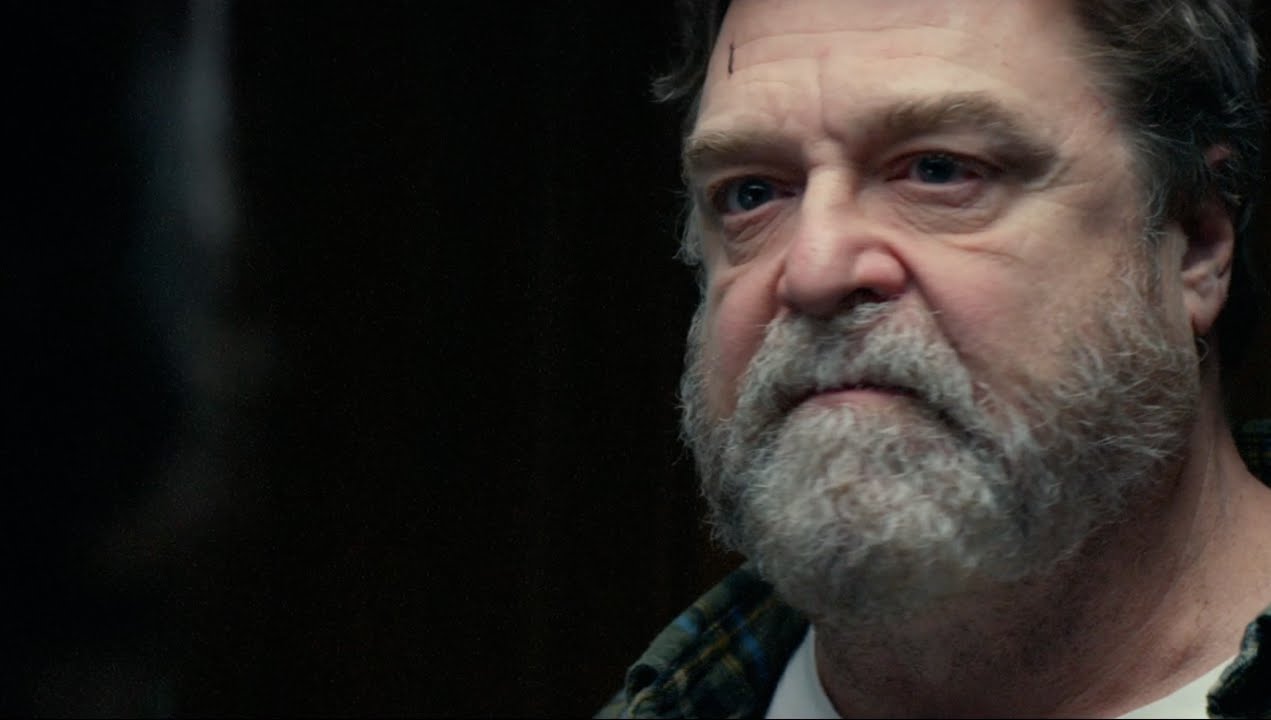 A corpulent man playing a socially inept character, a great touch that goes into Stambler is having him not do the things most fat people do to mask their size. Goodman walks with his shoulders back and gut thrown out, and though he’s got a beard, he’s shaved under the jaw to make his second chin pop out. The costume design accentuates his love handles. All these things take an actor whose size we’re all used to and turn him into this lazy expanse of humanity. It’s a great, well-executed choice for his character design.

The thing that holds this movie together, despite the apparent central conflict being completely resolved at two separate points, are its strong themes about survival and living. Stambler is very concerned with staying alive, having sacrificed his life savings and his family to build his fallout shelter, but when asked, says he didn’t particularly want to do anything else and doesn’t miss the things he lost, though the fact that he’s lying becomes increasingly clear as the film goes on. Michelle, on the other hand, is horrified at the notion of being trapped because she wanted to do things with her life, and when push comes to shove, she fights much harder for her life than Stambler does for his. It really reminds me of The Hurt Locker in that way, with surface-level conflicts coming and going but the movie as a whole actually being about how its main character views those conflicts.

This movie is not a sequel to 2008 smash hit Cloverfield, and it never was. It began its life as a script called The Cellar by Josh Campbell and Matt Stuecken, listed as one of 2012’s best unproduced scripts. Then Bad Robot got its hands on the script and had Damien Chazelle, who was going to direct it himself but backed out when Whiplash was greenlit, rewrite it, presumably adding the parts that connect most directly to Cloverfield, which are not coincidentally the worst parts of the movie.

Making this movie officially connected to Cloverfield feels a lot like a dirty trick. Shared producer J.J. Abrams said that he felt the giant monster genre is too played out after Pacific Rim and Godzilla, but viewers have been clamoring for a Cloverfield sequel since it came out, to the point that speculation was rampant Abrams’ 2011 movie Super 8 was connected to it. Executives say that they discovered that The Cellar had similar enough thematic elements to Cloverfield to be marketed as a “spiritual successor” — it doesn’t, and that term means nothing anyway — but all indications are that it was simply a way to cash in on fan demand without actually giving them what they want. It’s not the first time Abrams has resorted to under-handed tactics to play off of fans’ desires in a bad way — he lied to everyone’s faces about Kahn being in Star Trek Into Darkness for similar reasons.

The only thing 10 Cloverfield Lane really has in common with Cloverfield is that they’re both unforgettable, brilliantly crafted movies destined to be cult hits that herald great things for their principal creatives, which is an OK thing to point to.

Leopold Knopp is a formerly professional film critic, licensed massage therapist and journalism student at the University of North Texas. Go to bed, nerd. I’ve had a change of heart in regard to reader input. It is now welcomed and encouraged. Like Reel Entropy on Facebook, follow it on Twitter @reelentropy, and shoot questions to reelentropy@gmail.com.