It’s tough for a scandal to really get under people’s skin when the movie that carries it opens no. 4 behind a blaxploitation buddy cop sequel and the fifth week of Star Wars.

It may seem from Krasinski’s heavy featuring that Da Silva is heavily focused on as 13 Hours’ lead character, but he isn’t. The production just failed to attract any other even moderately famous actor. The film probably would have benefited from a tighter focus on his character as a way to get the audience more emotionally involved. Photos courtesy Paramount Pictures.

The film in question, 13 Hours: The Secret Soldiers of Benghazi, alternately referred to as Bayghazi, follows CIA security contractor Jack Da Silva (John Krasinski) to Benghazi, Libya, a city mired in gang violence after the fall of dictator Muammar Gaddafi two years earlier, which left both a power vaccum and a large stockpile of small arms free to be looted. Da Silva works with a team in the CIA annex, one of the only foreign outposts still operating in the city, along with the American Embassy. On the anniversary of the 9/11 attacks in 2012, street violence turned on the embassy and annex in an attack that would leave four dead, including U.S. ambassador Chris Stevens, played by Matt Letschner in the film.

The big deal about this movie is that, in the months leading up to its release, parts of the Internet — some of them pretty important — decided Democratic presidential candidate Hillary Clinton would really rather you not see this movie. Secretary of State at the time of the attack, Clinton has twice been called to testify before Congress on the night’s events and seems to have changed several details of her story over the three-year period since the attack, going as far as denying that she made any decisions at all. The point was that keeping Benghazi in the spotlight generally harmed Clinton, and doing so before the Democratic primaries were over hurt her even more, since other liberal options remain.

The main sticking point since the movie’s release is on whether or not the security team was told at first to stand down and allow the attack, as depicted in the movie. The CIA chief in charge of the annex, played by David Costabile in the film, insists that he gave no such order, and the Senate Intelligence Committee backs him up (first paragraph of page five). However, the surviving security contractors the film centers on claim otherwise. The film also affirms the other major conspiracy theories surrounding the attack, and was clearly marketed toward conservative moviegoers.

Really, a bigger feature of this movie than the -ghazi is the Bay. Director Michael Bay has cultivated a horrible reputation for making movies exclusively for 12-year-olds — specifically, 12-year-old white boys. The true-life war movies that have been making hay in January the past few years — Act of Valor, Lone Survivor, American Sniper — have often been criticized for their racial implications, and Bay has never been a feminist or NAACP favorite. 13 Hours is, more than anything, a dully typical movie, exactly what you’d expect from having Bay direct a movie in this string. His filmography is hugely pro-military and anti-government, though not always to excess. These themes ring heavily in 13 Hours’ principle point of controversy.

Bay’s reputation is worse than his movies, but 13 Hours doesn’t do much to stand out. It doesn’t have anything to develop any emotional connection to the characters, instead relying on the audience to love them unconditionally simply for being in the military and having beards. The action is OK, but nothing to write home about. It devolves, again, into a movie for 12-year-old boys. Things go boom. That’s all this movie’s got, and it’ll only work with an audience for whom that’s all it takes. 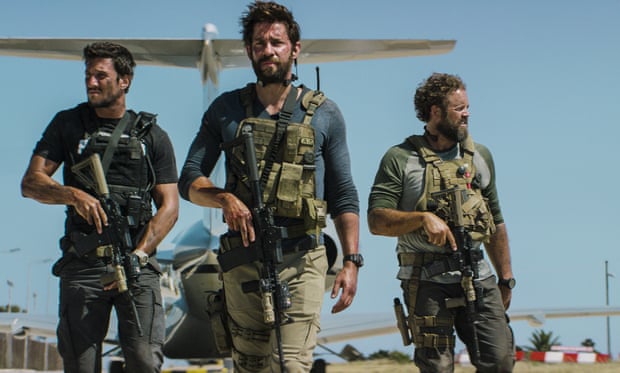 The movie has discretely complicated views on gun availability, as well. Both guns-as-safety — the security team asks for more weapons for contingencies, some of which become realities as the movie wears on — and guns-as-danger — the film features scary shots of merchants selling weapons from Gaddafi’s stash to the highest bidder on street corners — viewpoints are represented, and it gets pretty close to the truth in the middle.

The movies in this line are all racist at face value, pitting white good guys against a mess of brown potentially bad guys, but it’s more complicated than that. A lot of it is simply the reality of warfare in the Middle East — guerrilla tactics are emphasized and remaining unknown to the American military is vital to success, so every native Iraqi or Afghan is necessarily viewed with suspicion, and they’re all brown, because that’s simply the color people are in that part of the world. It all lends itself directly to a mentality of paranoia toward Arabic people in which they quite literally all look the same, and with American protagonists, the film necessarily tries to put the audience in that mindset as well. Any attempt at balancing it out by mentioning that they’re just trying to defend their home could be seen as an equally divisive move in the opposite direction. Getting a movie on this subject matter to be generally perceived as neutral is incredibly difficult because it is so politicized and under such a microscope. The only one that springs to mind for successfully avoiding racial pitfalls is 2008’s Best Picture winner, The Hurt Locker.

For 13 Hours’ part, there’s a definite focus on the February 17th Martyrs Brigade, a Libyan militia sympathetic to the U.S. which the film shows providing some help during the attack, though not the level of help a more formal military organization would provide. This is actually a much more positive representation of the Feb. 17 movement than they got from the State Department, which found the CIA’s trust in them was misplaced (last paragraph of page 32, but really the entire thing).

The movie’s sexism is much less complicated. The only female character is Sona Jillani (Alexia Barlier), an Exxon oil representative working with the CIA to arrange favorable oil prices with the emerging Libyan government and the security team’s primary reason for being in Benghazi in the first place. Within the film, she exists only to be rescued and then chastise the security team for doing its job, playing up the military persecution complex.

None of this really matters because of how few people are seeing the movie. It brought in $19.2 million over the long Martin Luther King Day weekend, becoming Bay’s first movie since 2005 to open below $20 million. After the laughing stock the Transformers series has become, it seems like the moviegoing public is getting tired of his shtick, and with 13 Hours really offering nothing but political implications and that shtick, it’s hard to blame anyone for not turning out for this.

Leopold Knopp is a formerly professional film critic, licensed massage therapist and journalism student at the University of North Texas. School isn’t a place for smart people. I’ve had a change of heart in regard to reader input. It is now welcomed and encouraged. Like Reel Entropy on Facebook, follow it on Twitter @reelentropy, and shoot questions to reelentropy@gmail.com.