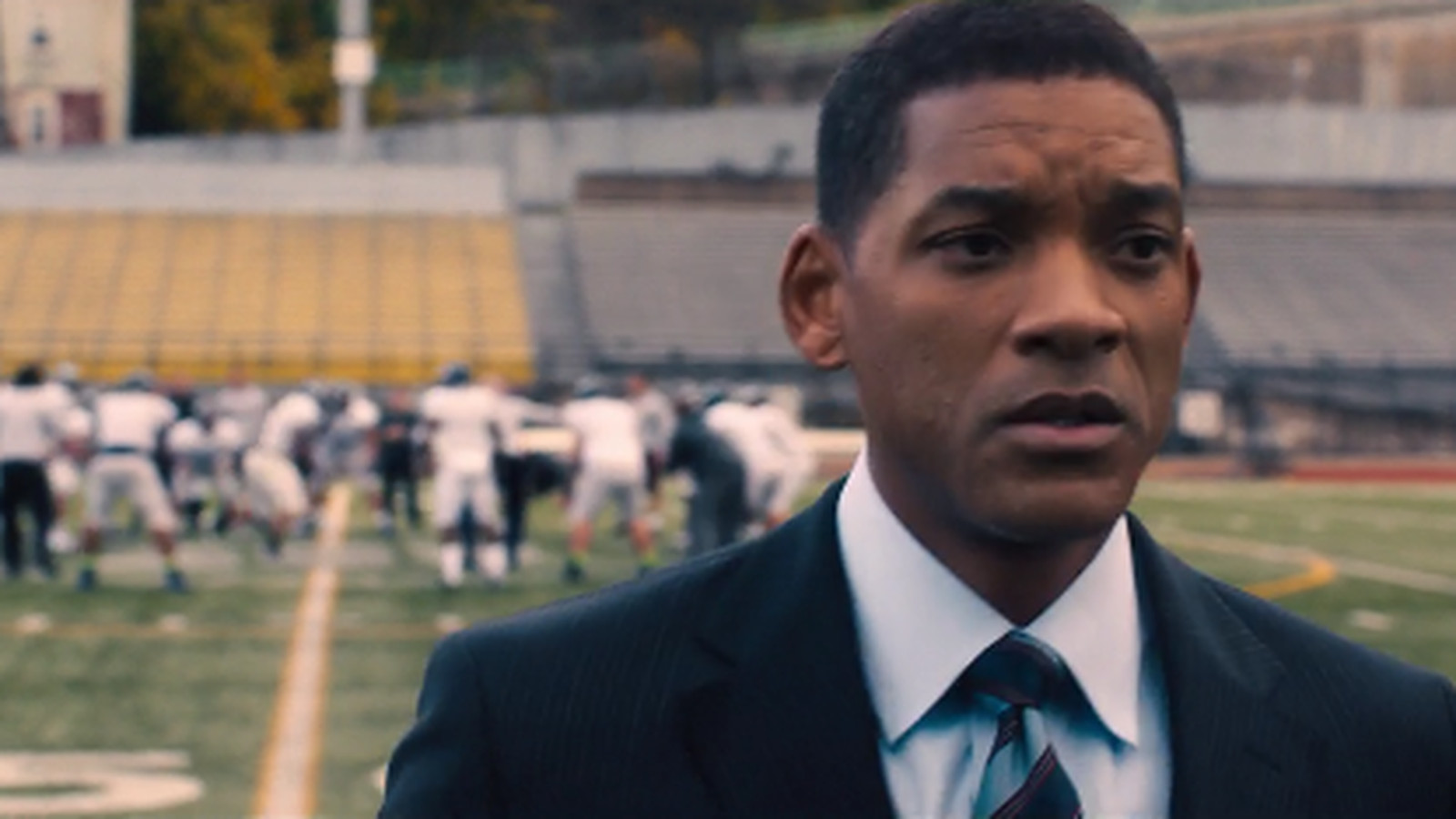 A concussion is, essentially, a brain bruise caused by the organ smashing against the skull, causing damage that can last from weeks to years. Chronic traumatic encephalopathy is a long-term degenerative disease caused by decades of concussive and sub-concussive blows to the head. It was previously known as dementia pugilistica or punch-drunk syndrome, initially discovered in 1928, so Omalu really didn’t discover anything. This is important! Photos courtesy Columbia Pictures.

The new movie Concussion isn’t about concussions at all, but about the discovery of chronic traumatic encephalopathy, an entirely different brain disease. It is the opinion of this publication that misnaming the movie is a deceitful, underhanded attempt by the producers to attract more viewers, given that concussions are a much more talked-about injury. As such, for the duration of this review, the movie shall be referred to as Chronic Traumatic Encephalopathy.

Chronic Traumatic Encephalopathy starts with Pittsburgh Steelers legend “Iron” Mike Webster (David Morse), who won four Super Bowls with the team between 1975 and 1980, being inducted into the Pro Football Hall of Fame. He would die five years later a divorced, financially ruined, self-mutilating wreck. Pittsburgh Medical Examiner’s Office coroner Bennett Omalu (Will Smith), unsatisfied that a simple heart attack killed Webster, dug deeper into his death and discovered irregularities in his brain tissue. Over the next few years, Omalu discovers similar symptoms in several other NFL players who died young and reportedly experienced depression and dementia after retirement. Omalu goes on a crusade to get the NFL to acknowledge the new-found dangers of football. He gains allies along the way — his boss at the medical examiner’s office, Cyril Wecht (Albert Brooks), and former Steelers team doctor Julian Bailes (Alec Baldwin) — but also faces stiff competition from the league, which desires to keep his research under wraps. Omalu also meets a woman, Prema Mutiso (Gugu Mbatha-Raw), and gets married, but despite what the movie thinks, this aspect of his life is really unimportant to this story.

Chronic Traumatic Encephalopathy is a 122 minute movie, and right off the bat, you can cut 60-70 minutes out of it. The movie takes about half an hour to get Omalu and Webster’s remains in the same room, and every scene in this segment is a good entry point. It could all be easily condenced into about five-10 minutes and made more powerful with smash cuts in the process.

Then there’s the storyline with Mutiso, which is long and boring and has nothing to do with examining brains. It only becomes tangentially related to the plot when she tells Omalu about how she was raped when she first came to America as a throw-away illustration of how important perseverance is and in the scene where it is heavily implied the NFL kills their baby, both of which are highly inappropriate for reasons that should be obvious.

So that leaves us with about 60 minutes of movie actually related to the plot, which could easily be edited down into about 30. Even when focusing on examining brains, Chronic Traumatic Encephalopathy is glacial. There’s a way to do slow movies right — each scene introduces a small amount of information and drives the plot forward a tiny bit. In Chronic Traumatic Encephalopathy, there are simply a ton of scenes, even among those that shouldn’t be summarily cut, that don’t move the plot forward at all.

It would be nonsense to pay full price for this. They’ve only made a quarter of a movie. There is so much room to expand, from a heavier focus on the hate calls and death threats Omalu received and how heavily ingrained the NFL has become to the U.S. to more screen time for Bailes and his guilt over his participation in what becomes of Webster and other former Steelers players. But as shot, Chronic Traumatic Encephalopathy is a major snoozer.

First, there’s this scene, in which Mutiso casually mentions to her husband that she was assaulted when she first came to America as a way to convince him to keep fighting the NFL. Near the end of the movie, after more than an hour of boredom, this scene moves the dial from 20 to 100 and back to 20 again in the blink of an eye. Even within the scene, Omalu thinks the assault is a more important topic. Later, there’s a scene in which Mutiso becomes distressed as she is followed for a few miles in her car, but then the following car just kind of stops. After this harrowing ordeal, Mutiso suffers a miscarriage. The implication is that the NFL was stalking the family and it lead directly to the tragedy, two claims that don’t hold up even within the film itself.

It’s easy to tell this was written and directed by someone who isn’t 100 percent a filmmaker. This is Peter Landesman’s third film writing and second writing/directing, and his first directing effort, Parkland, had a lot of the same pacing and narrative cohesion complaints as I’m bringing up about Chronic Traumatic Encephalopathy. I don’t want to discourage new blood from breaking into Hollywood and I’ve got mad respect for Landesman for the journalistic work he’s done on human trafficking and the Rwandan genocide, but he clearly needs to sort a few things out when it comes to directing.

This is probably the most off-type Smith has ever played, with a thick accent and uncharacteristic social awkwardness. Aside from Men In Black 3, he hasn’t made a blockbuster since 2008’s Hancock, and that’s also the last time he really put his signature Will Smith charisma to use. Maybe he’s been trying for some awards, but he never really got any buzz. He’s hardly the only one out of his element here — Brooks is the only player who seems to be enjoying himself.

Leopold Knopp is a formerly professional film critic, licensed massage therapist and journalism student at the University of North Texas. Tell me I’m a bad boy. I’ve had a change of heart in regard to reader input. It is now welcomed and encouraged. Like Reel Entropy on Facebook, follow it on Twitter @reelentropy, and shoot questions to reelentropy@gmail.com.