Only thing they sacrificed was opportunity to tell a great story

Posted on October 1, 2015 by reelentropy 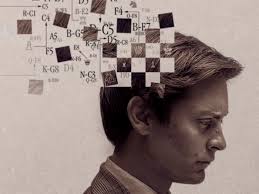 To say nothing else for the movie, the poster was killer. Stills courtesy Bleeker Street.

So when I heard there was going to be a new biopic about chess legend Bobby Fischer (Tobey Maguire) called Pawn Sacrifice, I thought that was a neat title. They were going to do a thing with it, where he was sacrificing pawns to win games and then it turned out he was himself a pawn that was being sacrificed, and use that metaphor as a way to explore his paranoia and genius. After finally winning the world chess championship title in 1972 from Boris Spassky (Liev Schreiber), Fischer disappeared until the early ’90s, and when he came back into the spotlight he was still a weird recluse with some choice things to say about the Jews, so there’s room to interpret that something happened to him in those 20 years.

That’s not the movie they made at all.

This is one of the most infuriating opportunities Hollywood has ever missed because it is so painfully obvious how this story should have been told, and it’s clear that someone at the top knew they should have made this movie this way because that’s how the advertising promises it’s made.

What they should have done

Gambit plays were never really big for Fischer, but much of his massive influence on chess is centered around his opening play. Fischer dramatically advanced theory on the Ruy Lopez and the Sicilian Defense, which are currently considered the strongest opening plays for white and black, respectively, because of his play with them. He was considered almost guaranteed to use these openings or other king’s pawn openings throughout his career and still won with them almost every time because his understanding of them was so far beyond everyone else’s.

It’s really sad to see how little work Tobey Maguire has gotten since the Spider-Man movies. In this, 2009’s Brothers and 2011’s The Details, he’s proven a versatile actor who can carry a movie with grace to some dark places.

Ironically, by the time he came out of hiding, Fischer had grown bored with chess because of opening theory and how much time top level players dedicated to memorizing variations. In his match with Spassky, he won the pivotal game by using the English Opening, which he had never used professionally before, just to throw Spassky off. He was so fed up that in the ’90s, he started advocating chess960, a variation of where the pieces’ starting positions are randomized, forcing players to understand what they were doing and actually play chess instead of just going through the main lines. His predictability on the chessboard was also harshly contrasted with his unpredictability off it and his rigidly held but constantly changing conditions for his matches.

So, this is a really simple movie to make, right? Genius but delusional/paranoid chess player who’s unpredictability is both a vice and a virtue, and it reflects in both his play and his relationships. You got a bit of the misunderstood genius thing when he goes against societal norms darkened by antisemitism and objective childishness. He grows more and more unraveled over the course of the movie and it both hurts and helps him more and more, culminating in him winning the most important game of the match with unpredictability but then forfeiting his title because of it. Insert a journalist or some other character who doesn’t know anything about chess to guide the audience so you don’t have to be a chess nerd to know what’s going on, and, yeah. That’s movie magic! Ain’t life grand

What they did instead

Pawn Sacrifice is so boorishly standard as a biopic it hurts. Every meaningless hallmark you could imagine is in this.

Opening scene set chronologically in the middle, but the rest of it done in a standard timeline? Yup. Awful child actors to waste 20-30 minutes going through his early life? You bet. Unearned aggrandizing of the main character after the fact? Like you even need to ask.

What’s really irksome though is, despite how little effort was put into making the story actually interesting, there was a lot of effort put into trying to trick viewers into seeing it as interesting. Many scenes cut to shots of black and white with old-timey texturing, and there are even a couple of moments with photographers involved where the screen freezes for a second in this texture and coloration to show everybody the picture that was just taken. This would be really cool, if they used the actual footage and pictures, but they don’t. It’s still Tobey Maguire and his prosthetic warts. The only reason I can think of for using this effect is to remind viewers that this is being recorded, as if the camera flash and Fischer’s hissy fits about how much noise the cameras are making aren’t enough to clue us in. The hope probably was that someone, somewhere, would find this effect interesting, but that’s two clicks in Photoshop. It’s nothing.

There’s a lot of talk about how Spassky applauded Fischer after his victory, which really happened, and chess grand masters were moved to tears by how beautifully he played, but outside of two or three particularly famous moves in the match with Spassky, we’re not really shown any chess at all. It’s not necessary in every movie about games to show the game that’s being played — movies should be about the people doing the thing, not the thing that they’re doing — but in a movie like this where the plot is tied so directly to gameplay it’d at least help. Chess is an incredibly complicated game, but it’s easy to dumb down for an audience. This is where a character who doesn’t know anything about chess, absent from the movie, would be really helpful. They could use him as an entryway to explain what makes Fischer so good, and then we can actually see some games, and then they can actually show the grandmasters being moved to tears and how nobody ever applauds their opponent, and it can have a real affect on viewers when they discover it first hand instead of being fed this information by newsreel. Isn’t “show, don’t tell” one of the most basic tenets of storytelling?

They even add in a prostitute character (Évelyne Brochu) to make a big deal out of taking Fischer’s virginity because, man, what…

This lady’s entire onscreen presence is in a few scenes that can’t total more than two minutes of screentime, in which she tries to get Fischer into bed and they establish that Fischer doesn’t really care about getting into bed. Then, an hour and a half of movie time later, it cuts back to her in the hotel lobby watching him play Spassky and bragging about having had sex with him. It’s one of the most baffling nonsequiters I’ve ever seen in a movie. Donna is the only person in the movie who is impacted even a little bit by her being there. She has absolutely no effect on any other element of the plot. The entire apparatus is at best moronically counterintuitive, at worst callously sexist and still moronically counterintuitive.

So much trouble has been gone to to make it seem like there’s something unique or interesting about Pawn Sacrifice, but there just isn’t. No matter how you dress up a boring movie with a poor plot, that’s what it will always be underneath.

Leopold Knopp is a formerly professional film critic, licensed massage therapist and journalism student at the University of North Texas. Howl at the moon. I’ve had a change of heart about reader input. It is now welcomed and encouraged. Like Reel Entropy on Facebook, follow it on Twitter @reelentropy, and shoot questions to reelentropy@gmail.com.