Sinister lives up to name, down to expectations

This film obviously comes with a severe trigger warning for people who have lived in abusive households. People get immolated and eaten alive in this movie, but the scenes of domestic abuse and resultant trauma are somehow even more graphic. Photos courtesy Gramercy Pictures.

Sinister 2 is mostly exactly what you’d expect, and as a case study it may represent people finally getting tired of all these cheap, grainy horror movies.

The film sets up several storylines which parallel and converge quite gracefully. In one, the Collins family — mother Courtney (Shannyn Sossamon) and twin boys Zach and Dylan (real-life twins Dartanian and Robert Daniel Sloan) — are haunted by Bughuul (Nicholas King) and his previous victims, particularly Milo (Lucas Jade Zumann). In another, and I swear to god this is his actual credited name, Ex-Deputy So & So (James Ransone), a minor character from the first movie, investigates their haunting. In the final storyline, the Collins’ abusive father, Clint (Lea Coco), to whom Courtney is still married, hunts them down.

The film is at its best when viewed from a distance. It’s very obviously actually about parental abuse and peer pressure, and all the best horror movies are more about what’s going on between the characters than any supernatural aspects, though most disguise it better than this does. The main character arc is with the twins, with the one whom Bughuul will eventually corrupt taking after Clint Collins and becoming a bully and the other taking after their mother and remaining passive in the face of violence to the point of enabling his tormentors. The scariest scenes are when Clint is doing his abuser thing, and if he were more present in the movie it’d be a lot better.

Sinister 2 shares a writer with the first movie, but with all the lead characters dead it has no real connection, and that’s great because a lot of the best sequels — The Dark Knight, The Raid 2 — have little plot connection to their progenitors and are forced to be what amounts to an entirely separate movie, and that’s not a coincidence. People appreciate originality, and essentially original stories are easier to tell anyway. This is director Ciarán Foy’s first film with a major distribution company after his 2012 debut, Citadel, and that’s how a lot of directors’ careers are getting started these days. They do something small that impresses, then they’re given a money-driven production and asked to make it a good movie. Even though this film is exploiting a previous hit that didn’t lend itself to a sequel, Foy’s got an encouraging future. It’s like he stood out in a job interview — he had to do this long, demeaning thing to get his foot in the door, but he handled it well and you want to see what he’ll do in the future. 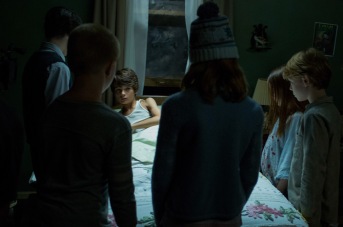 There’s also a good bullying/peer pressure subplot, with many of the twins’ interactions dictated by this group of ghosts.

Sinister 2 is seldom at its best. It gets better as it goes along and Clint Collins gets more screentime, but he’s not introduced for 30-45 minutes. He’s the character that ties it all together, but the movie spends much more time with Dylan Collins, Milo and the deputy doing the standard haunted house thing. It’s all telegraphed jump scares and creepy little kids, all shortcuts to create a forgettable movie and nothing aimed at creating a memorably unsettling experience.

The reception for Sinister 2 has been frosty, to say the least, much worse than the movie itself, and it may be because people are simply getting bored with this kind of movie.

Maybe a bigger focus on the father storyline would have helped. Maybe he has subtly distinctive body language and Bughuul takes on a bigger role and mirrors that body language to create a stronger subliminal connection. Maybe you get rid of all the little kids and Zach’s fall from grace is only a function of his father’s example. That’d have been neat.

There were parts of this movie that I liked and really stuck with me, but most of it is exactly what you’d expect.

Leopold Knopp is a formerly professional film critic, licensed massage therapist and journalism student at the University of North Texas. Freshmen are the worst. I’ve had a change of heart about reader input. It is now welcomed and encouraged. Like Reel Entropy on Facebook, follow it on Twitter @reelentropy, and shoot questions to reelentropy@gmail.com.

1 Response to Sinister lives up to name, down to expectations