Rogue Nation as good as any Mission: Impossible — not great by 2015 standards

Tom Cruise, despite the Scientology, despite the public, super-weird obsession with Katie Holmes, is still the textbook definition of everything a Hollywood superstar can and should be, but frankly, that concept is starting to look as dated as the Mission: Impossible movies. Photos courtesy Paramount Pictures.

Mission: Impossible — Rogue Nation delivers the goods, I guess. I mean, if that’s what you call “the goods.”

The movie follows Ethan Hunt (Tom Cruise, who also produces), after he is disavowed FOR THE THIRD TIME by the U.S. government, which disbands the entire IMF after the events of Ghost Protocol. Despite this, Hunt continues to follow the Syndicate, a multinational crime organization he just heard about at the end of the last movie. After seeing the Syndicate leader (Sean Harris) murder a record shop girl in cold blood, Hunt follows him from Vienna to Casablanca, Morocco to London, picking up old IMF hands still loyal to him personally (Simon Pegg, Jeremy Renner and Ving Rhames) along the way.

Making the trip to the fifth Mission: Impossible movie is a lot like making the fifth trip to the same amusement park. You’ve been planning this for months, you’re excited, it’s going to be so much fun — but when you get there, the rides are all the same. The stuffed animals have been switched out, but the games are the same. They even have the same host to guide you through it all.

Not helping is the fact that, in this particular metaphor, other amusement parks have been popping up all over the place with new attractions that change the way people think about rides in the first place, and you can’t shake the feeling you’d rather be headed to Six Flags Over Mad Max. 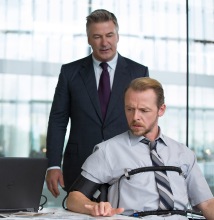 Wasn’t disbanding the IMF a major part of the last one’s plot, too? No one remembers? OK…

Mission: Impossible — Rogue Nation is an antique. It’s a throwback to the action/spy movies of the late ’90s and ’00s, the series hey day, not realizing how much these movies have evolved since then. Hunt’s hollow characterization, the vague half-there themes, the casual sexism and the lack of action in what is supposedly an action movie — we’re past those things now. Mission: Impossible never got the memo.

The plot of this movie is nonsensical and was written as an excuse for its elaborate set pieces. There’s a scene where three Syndicate operatives are sent to the same opera to assassinate the same Austrian prime minister. One is disguised as a band member, and he spends a minute of screen time breaking down his clarinet and rebuilding it into a rifle. One is disguised as a cop, and he spends time breaking down his nightstick and rebuilding it into a rifle. One has no disguise, but she also has a clarinet, because damn it, rebuilding things into a rifle is what this scene is all about.

Why couldn’t they send one assassin and have her shoot him with a regular gun from a rooftop while he’s outside, like a normal crime organization? It’s later revealed that this is a test of loyalty for Ilsa Faust (Rebecca Ferguson), who would be killed immediately by one of the other assassins if she didn’t do the deed, but what about this requires the elaborate disguises and the funny weapons? What about this requires a second assassin to be present? They’ll get plenty of opportunities at both Faust and the minister in the future. Why is this test even taking place? If Faust’s loyalty is in question, why not just cut her head off, which, again, is what any self-respecting crime organization would do?

There’s a scene where Hunt has to hold his breath for three minutes to replace a security profile so Benji Dunn (Pegg) can break into a facility and download a file that is being kept on a computer with no internet access behind a lock, a retina scanner and a gait-appraisal device that can see through any mask, meaning the only way Dunn will get through is if his security profile is already in the system. Hunt must hold his breath because the security profiles are all stored on individual floppy disks in a weird, underwater chamber that will shut down if any metal is detected — I guess all the computer components are plastic? — so he can’t use an oxygen tank.

So, if the security system is stored in hardware under this whirlpool, how big is the whole physical system, exactly? There’d have to be a hardline connection from this computer all the way to the facility, right? No one cares? OK…

Why does this facility exist? Is it just to guard the data Hunt is after, or are there more files that absolutely no one can ever see? If the files are so harmful, why not just delete them? How did they design the security measures here? Did an independent contractor come in and say, “No one could even get into the air vents in this place, your only vulnerability is if someone slides a false profile into your security system. I recommend building a massive, water-proof chamber to store all the profiles in, and then filling it with water and building some kind of anti-metal sensor in case someone tries to dive in with an oxygen tank. Also, you’ll need some kind of rotating arm to fuck with anyone insane enough to try this. Please, don’t code your security profiles into the facility’s software like everyone else does, particularly not on the hacker-proof computer system you already have on-hand, and don’t put the hardware-stored profile discs behind the security which I’ve already said is otherwise impenetrable. This absurdly elaborate underwater computer is a much better idea!” Why didn’t Hunt and company just pay off someone who was already in the system, like a normal spy agency would do?

It’s called Mission: Impossible, these missions should actually be impossible!

Whose side is Faust on? She double-crosses someone every time she’s onscreen, and her motives are never clear until near the end of the movie. The idea is to keep the audience guessing, but there’s nothing to guess about. There are no clues to this mystery. When the audience is trained to expect the unexpected from her character, the unexpected becomes tame. “Woah! She’s a double agent!” quickly becomes, “Oh. She’s a double-agent.” The only thing solid about this character is her sexual tension with Hunt and his Main Character Powers.

One has to wonder, would Hunt walk away from the gas chamber? This man is an invincible immortal. Forgetting everything he’s walked away from in the previous movies, in Rogue Nation Hunt spends two minutes unconscious underwater, is in a car that’s rolling nose-over-trunk creating what amounts to four or five head-on collisions with him in the driver’s seat and gets thrown from a motorcycle onto pavement wearing no protective equipment. The entire tension of sequences like this is in worrying whether or not something will happen to the character. That tension is partially broken by him being the main character, but that can be gotten around. What can’t be gotten around is the knowledge that something did happen to him in the last sequence that should have killed him three or four times over, but the movie simply cheated, and even if something does happen to him in the next sequence he’ll clearly still walk away unscathed.

Isn’t this character married? Doesn’t the real-life actor/producer have a real-life ex who looks just like this lady that he’s supposedly not over at all? Wasn’t Paula Patton in the last movie? We’re just not gonna talk about those things? OK…

You may be thinking, “It’s just a movie! It’s fun! The plot doesn’t matter, just the action!” but that is simply not the case. Pierce Brosnan’s last Bond movie featured virtual reality ballistics training, an invisible car and a satellite that fired beams of pure sunlight, and everybody hated it. Since 2006, Metro Goldwyn Meyer has brought the franchise into the 21st century by cutting the elaborate sets and ramping up the elaborate action. James Bond isn’t a superspy anymore. He’s an emotionally vulnerable, hyper-violent gymnast with a serious drinking problem, and the new movies are adored. Two of the three were immediately hailed as the 50-year-old franchise’s best, and the other one was only panned because people were expecting it to be as good as the first. All of these movies are filled to the absolute brim with action — actual compelling action, not OK action in a compelling but nonsensical set.

Rogue Nation is 131 minutes long, and only about 30 of those minutes are action or tension. That leaves 100 minutes of pure plot. That’s a solid feature-length movie’s worth of talky stuff that doesn’t make sense in what is supposedly an action movie. That may have been the standard when the series started, but two and a half months after Mad Max: Fury Road stuffed 40 minutes of much better action into just 120 minutes of movie, it’s completely unacceptable. And lest you think that’s an aberration, it’s backed up by the other best action movies of the decade — 2012’s The Raid: Redemption and its 2014 sequel The Raid 2: Berandal — which combine for four and a half hours, at least half of which is spent getting down to brass tax. And to say the action in these movies is merely better… just watch:

Action and spy movies have evolved rapidly over the past 10 years — even over the past few, all the movies in the paragraph above came out since the last Mission: Impossible movie. Rogue Nation is pretty much everything you’d expect from a blockbuster in the mid-late ’90s.

But that’s not good enough anymore.

Leopold Knopp is a formerly professional film critic, licensed massage therapist and journalism student at the University of North Texas. STOP MURDERING BLACK PEOPLE! I’ve had a change of heart about reader input. It is now welcomed and encouraged. Like Reel Entropy on Facebook, follow it on Twitter @reelentropy, and shoot questions to reelentropy@gmail.com.

1 Response to Rogue Nation as good as any Mission: Impossible — not great by 2015 standards