Pixels is tolerable, not great, everybody calm down 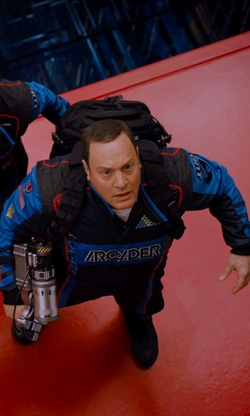 President Paul Blart? There are a lot of things about Pixels’ premise that are hard to accept, but that is by far the hardest. Photos courtesy Columbia Pictures.

Critics are going absolutely apeshit about Pixels, and it’s a gigantic overreaction.

The movie follows Sam Brenner (Adam Sandler, who also produces), a competitive arcade gamer in 1982, into the present day as an abject failure — divorced, installing other peoples’ entertainment systems for a living. However, the 1982 world video game championships were sent into space as part of a package on global culture from that year intended to communicate with alien life. Aliens had found the probe and mistook it for a declaration of war — and, somehow, the terms of engagement for said war. Every couple of days or so, the aliens send down a squad to play out a life-size arcade game, and the first planet to win three games gets to destroy the other one. Brenner’s life-long friend Will Cooper (Kevin James), now President of the U.S., recruits him to fight off the invasion, alongside fellow childhood friend Ludlow Lamonsoff (Josh Gad) and rival Eddie Plant (Peter Dinklage).

One would ask how they think humans will destroy their planet, but these invaders are clearly not big on any kind of communication.

Pixels will never be called a good movie by any stretch, but it’s got plenty of laughs and makes for a fun time at the movies. The concern with Sandler and James is always that they’ll ham it up way, way too much because they tend to pick up starring roles in weak scripts and aren’t all that funny without some kind of physical aspect to begin with, but here they just sit back and crack wise while the visual effects team wins the bread. At one point, First Lady Carolyn Cooper (a woefully underused Jane Krakowski) tells her husband outright to tone it down.

Not toning it down at all, thankfully, is Dinklage. Obviously a higher caliber actor than everyone else in this movie, the Game of Thrones star lifts everything around him up in a wacky, macho performance.

Also not toning it down, unfortunately, is Gad, who is doing his best Adam Sandler impression throughout the movie.

There are a load of plotholes, but for some of them it kind of makes sense that they’d be there. The alien technology and mindset is random and unexplained, as are the rules of their game — Brenner goes from the player character perspective in Centipede to the villainous NPC ghosts in PacMan, without any explanation — but given that the movie only takes place over a couple of days and neither warring party makes any real attempt at communication, it follows that the alien’s perspectives would seem a bit warped.

The adorable Q*bert is far and away the best thing about this movie.

The plotholes that don’t make sense are questions about why only three arcade game experts were consulted and seemingly contradictory throwaway lines from the captive Q*bert about the aliens’ mindset and whether or not he’s a captive. There is a definite sexism problem, however, when it comes to Lady Lisa (Ashley Benson), whom Lamonsoff has been obsessed with since childhood. She eventually becomes a literal trophy, though with all the flack Lamonsoff takes for his basement-dwelling lifestyle and an immediate line from Brenner questioning the situation, this can’t be seen as a thing to aspire to.

The movie is forgettable and flawed, but its charms are enough to make up for this. It doesn’t hurt America the way something like Home or Transformers 9 does.

You wouldn’t get that impression from the Rotten Tomatoes page, though.

There’s a lot of raging going on about this movie, and it mostly seems to revolve around how much better the 2010 short on which the movie is based was and how much the movie failed to do anything with themes about fantasies in which one saves the world with abjectly useless skills, the traditional nerd/jock conflict, the patterns and grace of arcade games vs. the blood and randomness of modern console shooters and platformers, the binary between winning and losing, the modern barrage of nostalgia-driven pop culture or the glorious treasure trove of nerd culture the premise draws from.

You can’t say a 5/10 is actually a 2/10 because it should’ve been an 8/10. That kind of relativism defeats the point of any grading metric. But that is a long, long list of themes and subtexts that either the movie creates and drops or turns into hackney cliches or are inherent in the premise but never addressed. Through the movie’s laughs and big, colorful action scenes, it really does aim low.

I’m not sure who this is meant to appeal toward. Children who don’t know what PacMan is? No. Parents who grew up in the ’80s, when these games — and Sandler — were good? If it were for them, the nostalgia factor should have been ratcheted up. Boxofficemojo projects it at no. 1 this weekend, but with Minions, Ant-Man and Trainwreck all closely following, all more tightly oriented toward their target audience, as are fellow new releases Paper Towns and Southpaw. Pixels is going to have a hard time making much past this weekend with a better movie already out for every conceivable target audience, Mission Impossible 5 dropping next weekend and the critical beating it’s taking.

As ironically OK as it is after all the terrible movies Sandler has made, Pixels could be a deathknell for his career as the $88 million movie — Sony’s only real blockbuster this year — cruises toward commercial catastrophe.

Leopold Knopp is a formerly professional film critic, licensed massage therapist and journalism student at the University of North Texas. Does anyone else realize we are the only species in history that needs toilet paper? I’ve had a change of heart about reader input. It is now welcomed and encouraged. Like Reel Entropy on Facebook, follow it on Twitter @reelentropy, and shoot questions to reelentropy@gmail.com.

2 Responses to Pixels is tolerable, not great, everybody calm down