There are reasons to remake Poltergeist, but this remake doesn’t use them

Poltergeist is a successful update that incorporates modern technology, background and tropes into an old movie, but you still have to wonder, “why?”

The remake follows the Bowens, who move into a new house that’s a step down for them due to father Eric (Sam Rockwell) being out of work. However, they got a great deal on it, as the neighborhood was mostly forclosed on in the housing crisis. Unfortunately, Indian burial ground shenanigans that mysteriously don’t affect the rest of the neighborhood kick in immediately, climaxing in young daughter Madison’s (Kennedi Clements) abduction into her closet. The signature tree and clown scares move to the opening haunting sequence and there are some adjustments to make the fracturing family subtext more obvious, but it mostly goes through the motions of the 1982 original.

It’s by no means a shot-for-shot remake. Modern effects are used to explore the netherworld in depth, where it was all offscreen in the original. Benevolent old psychic lady Tangia Barrons becomes Carrigan Burke (Jared Harris), an Irish ghost hunting TV star with black battle scars and grizzly, smoldering sex appeal. The daughter who spends all her time on the phone, Kendra (Saxon Sharbino), now spends all her time on her smartphone. It’s clever. It really brings the story into a 2015 setting.

But at the same time, it doesn’t bring the story into 2015. The 1982 Poltergeist made viewers scared of their 1982-era houses. The remake may have 2015 technology, but it’s still using old clown dolls and dead American Indians as the chief points of terror. The only thing 2015 about this movie that isn’t its setting is the nonsensical insistence on having a grainy footage shot and one of those little-girl-with-a-messed-up-face-turns-around-suddenly jump scares in there, because that’s what producers think is scary these days.

The remake gets one-upped by the original in this way. The original didn’t reveal anything about the Indian burial ground until toward the end, leaving the viewer to subtextually understand that the family’s distraction from each other and constant TV consumption is to blame. The burial ground is more of a distraction than anything else. In this one, it’s all burial ground all the time. 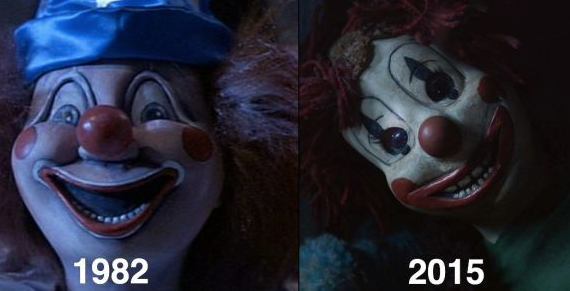 The clown design is new. So, there’s that. 1982 image courtesy Metro-Goldwyn-Meyer.

There are smartphones and flatscreens and fad TV shows and even drones, but there’s no reason to be scared of them. The closest thing to what would be a meaningful update is a scene in which Kendra’s smartphone acts up and keeps flickering from the texting screen to something that looks like a sinister Chat Roulette session, but what it’s switching to is never clear. The drone is actually helpful in this movie, as Griffin (Kyle Catlett) uses it to go after Madison, as is the fad ghost hunting show, which produces the family’s savior. The TVs simply flicker as they do in the 1982 film.

Maybe Griffin loses control of the drone partway through, and it becomes something the ghosts use to hover and watch physically. Like, Kendra’s running around the house away from a jump scare in every room, then the third scare is the drone, just, hovering and staring at her. Maybe Griffin learns something about the creepy graveyard-moving government coverup through use of the drone. Maybe they use the multimedia integration of the smartphone to create an enclosure for Kendra like in Unfriended, where she tries to get help but can’t no matter what she does. Maybe they use a fourth-generation entertainment system to make a point about the cannibalization of media consumption — introduce an early teenage son who spends literally all his time, gaming, Netflix, On Demand, whatever, on his Xbox, and have him be the one who gets sucked into the netherworld. That would one-up the original, in which the sinister TV just played in the background too long.

Poltergeist does none of these things. It updates its source material aesthetically, but not meaningfully.

Really, this movie just exists. Like the sequels, it will be remembered only in a passing thought as a function of a classic most anyone would prefer to watch.

Leopold Knopp is a formerly professional film critic, licensed massage therapist and journalism student at the University of North Texas. If a package says “Tear here,” it’d better fucking tear there. I’ve had a change of heart about reader input. It is now welcomed and encouraged. Like Reel Entropy on Facebook, follow it on Twitter @reelentropy, and shoot questions to reelentropy@gmail.com.