Madding crowd here referring to those Marvel maniacs this released against 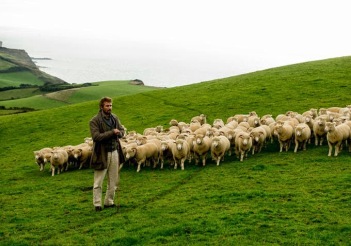 This movie could just as well be about how stupid sheep are. Photos courtesy Fox Searchlight Pictures.

Far from the Madding Crowd is one of those movies that makes me uncomfortable being born a man. I just want them to stop hitting on her. It’s a “Leave Bathsheba alone! Leave her alone!” type situation.

The movie follows Bathsheba Everdene (the scintillating Carey Mulligan) as she is proposed to by every man that lays eyes on her. She first meets Gabriel Oak (Matthias Schoenaerts), an affluent shepherd. While Everdene worked for him when he first proposed, he works for her most of the movie after she inherits a farm from her uncle and he loses his flock to an inexperienced sheep dog who, in a distressing scene, drives the whole lot over a cliff. She is then proposed to by her neighbor, William Boldwood (Michael Sheen), who becomes obsessed with her after getting a cheeky Valentine’s card. Finally, while making the rounds on her farm, she locks eyes with the wandering Sergeant Frank Troy (Tom Sturridge), and a slow look of “oh shit” crawls over her face as she realizes yet another suitor has latched onto her.

Far from the Madding Crowd is a remarkably calm movie. Even in scenes with a literal fire or where an entire flock of sheep kills themselves, the camera stays still, and the only music is period-setting violins. It’s an unexpressive film. The point seems to be to create that late 1800s English countryside atmosphere the book was about, and it’s nice, but it’s much easier to do with a movie than with a book and movies are capable of much more in general.

This kind of unexpressive filmmaking relies more heavily on the script and actors, and this film has them to spare. Mulligan is amazing as ever, one of the only women who could pull the role off with so little help. Sheen is fantastically pathetic as the sniveling Boldwood.

This movie kind of begs the question, “why now?” This is the third film adaptation of Far from the Madding Crowd in the past five years and the fourth in the past 20, though this is certainly the highest-profile of the bunch. It’s still, however, an art house film, released in fewer than 300 theaters by Fox Searchlight, 20th Century Fox’s prestige picture subsidiary. So, it wasn’t released for money. It could have been released for prestige, but that’s a rather unsatisfying answer and it doesn’t match the timing — the movie was released May 1 opposite Age of Ultron breaking the seal on this year’s blockbuster season. Prestige pictures don’t normally get released until the later months.

Can well-meaning and material benefits sometimes outweigh creepiness? No.

For me personally, the film became an uncomfortable one entirely about what men do wrong in courtship, and that may or may not be the big idea. The principal characters do everything but bitch about the friend zone in this movie.

There’s the abuser, Troy, who wins Everdene’s affections and proceeds to take full sadistic advantage of her. In the seduction scene, in which he lies about his sword being razor sharp before swinging it all around her, he betrays her literally, figuratively, subtextually and symbolically in a display of peacockery that shouldn’t be a turn-on, but so, so is.

There’s the puppy, Boldwood. He’s so sweet and obviously cares very much for Everdene. How could he not, after that incredible Valentine’s Day card? He cares so much that he offers her all his things , and then offers again to take up the debts she inherits from Troy.

Far from the Madding Crowd puts viewers through the awkwardness of being the object of this sort of affection in general, and also gives a bad boy that can be dug by all the chicks, but is also clearly a terrible, abusive human being.

Though I’m not sure if that’s what it was going for, the film drew emotion out of me, so good job, I guess.

Leopold Knopp is a formerly professional film critic, licensed massage therapist and journalism student at the University of North Texas. If you’re going to shoot someone, do it over something better than fried pickels. I’ve had a change of heart about reader input. It is now welcomed and encouraged. Like Reel Entropy on Facebook, follow it on Twitter @reelentropy, and shoot questions to reelentropy@gmail.com.