Girl Problems from the Machine 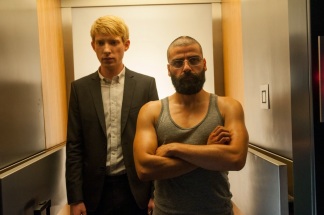 Nathan’s man-cave is high-tech and well-lit, but also pretty kidnappy, with doors that lock automatically when the power goes out and this weird, fascist key-card system he insists on. Photos courtesy A24 Films.

Ex Machina is a beautifully shot, exhilarating film about paranoia and humanity, but it loses some points over its nasty but intriguing gender issues.

The film starts with Caleb (Domhnall Gleeson) winning a week with Nathan (the scintillating Oscar Isaac), a hermit software genius who became a billionaire after developing something akin to Google. Soon after they meet, Caleb learns what he’s really won: the chance to be the human part of a Turing test with the artificial intelligence that Nathan has developed, an android named Ava (Alicia Vikander), though it is clear early on that the real test is for Caleb.

The trailer spoils pretty much everything and most people would be able to figure out the plot even without it, but Ex Machina has a way of making viewers not expect what’s going to happen anyway. The film obviously has some complex messages about the way we use technology and how we interact with members of the opposite sex, but they’re all buried underneath an equally complex, visually rich story about two people having a battle of wits over the main character’s heart and mind.

The first thing to notice about this film is its sparkling visuals. Nathan’s underground bunker looks like a combination of the future and the past, with stone walls on one side and phosphorescent white touchscreens on the other. When the power goes out and the backup generator kicks in, everything goes from being lit from above in neutral white to being lit from below in sinister red. Mirrors are everywhere in this set, and first-time director/veteran writer Alex Garland makes full use of them and then some.

The subtly oppressive environment turns outright scary in red, and nothing gets the creep factor turned up higher than Ava, who’s see-through torso is suddenly a glowing orb of blood. Also, check out the reflections in this shot.

There isn’t really enough that can be said about the lead performances. Isaac is imposing as a suave, subtle bully. Vikander strikes this combination of vulnerable and aggressive and flirty and socially awkward that makes her sympathetic and at the same time completely alien, even as Nathan and Caleb talk about how human she seems.

The central question the characters are trying to answer is whether or not Ava’s intelligence is distinguishable from a human’s, and predictably it becomes a question of what makes the human tester so qualified to decide that, and predictably this becomes psychologically torturous for Caleb, but the movie is somehow no less exciting or shocking for its predictability. This is probably because the film is only predictable from a storyline perspective, while it remains uneasy and erratic from a scene-to-scene perspective by having the viewer sympathize with a character who is being used from two directions, with one of his users being the alcoholic, impulsive Nathan. The suddenly much-heralded dance scene is an example of how Caleb is pushed to extremes over the course of the film while his experimenters remain in the same state.

The problem, or at least the perceived problem, with Ex Machina is its sexual politics, which are just as complex as the rest of the movie. The only female characters, Ava and Kyoko (Sonoya Mizuno) aren’t actually human, and one of them is using her sexual characteristics to manipulate the main character while the other is a highly versatile sex toy. This could be a reflection of Nathan’s pervy, disjoined views on women, or it could simply be that the story is about two men who have been hurt played out in a fantastic setting, but whatever thoughts the male characters have about women and however wrong-headed they are, those are the only thoughts the film presents because it’s all from Caleb’s perspective and all set in Nathan’s private world. But the film is a little too complicated to label sexist after one viewing. Frankly, they could take out all the AI elements and have a movie that is just about these characters of these genders interacting, and it would be no less complicated.

Leopold Knopp is a formerly professional film critic, licensed massage therapist and journalism student at the University of North Texas. Man, Daredevil is worse at having a secret identity than Christopher Nolan’s Batman. I’ve had a change of heart about reader input. It is now welcomed and encouraged. Like Reel Entropy on Facebook, follow it on Twitter @reelentropy, and shoot questions to reelentropy@gmail.com.

This entry was posted in Entropy and tagged #A24, #A24 films, #AI, #Alex Garland, #Alicia Vikander, #ex machina, #Google, #Oscar Isaac, #Rise of the Machines. Bookmark the permalink.

1 Response to Girl Problems from the Machine