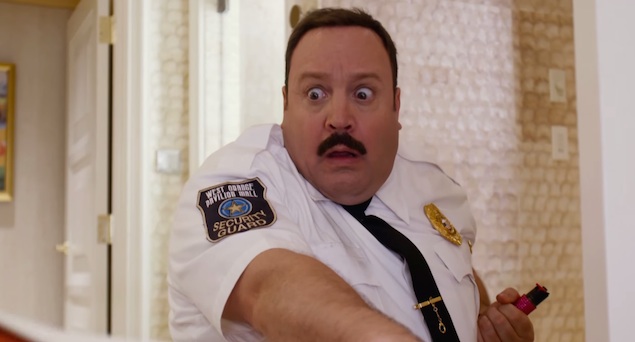 In one scene, Blart passes out from his hypoglycemia and must use a nearby child’s melting ice cream to revive himself. He crawls forward, moaning about his need for sugar, and then lies underneath the dripping cream, followed by an extended shot of the cream getting all over his face as he desperately tries to swallow it. In this scene, James graphically turns himself into the cockroach and the whore that he was to make this movie. Photos courtesy Columbia Pictures.

In the opening scenes of Paul Blart: Mall Cop 2, in what is very much the best part of the film, Blart’s (Kevin James, who also writes) wife leaves him after six days and his mother gets hit by a milk truck. But he just as quickly receives a ray of light when he is invited to the national mall security conference in Las Vegas. There, the hits keep coming as Blart fights with his daughter and pretty much everyone he comes into contact with. Soon, this conflict becomes justified as Vincent (Neal McDonaugh) attempts to pull several priceless pieces of art from the hotel.

Blart is constantly being graphically turned into a bird, either by flying through the air, donning wings in one scene or running into a window that was too clean in another. The film’s only other exposure to birds is in one scene, seemingly unrelated to the rest of the narrative, in which Blart finds himself in a romantic nook of the hotel and is violently attacked by a peacock. It seems like a simple joke scene, but in reality, it betrays Blart’s true, bloodthirsty nature.

Is this supposed to be a satire? Is it supposed to be a Monty Python, so-bad-it’s-good fare? James initially laughed off the idea of a sequel, so there’s reason to think it may have been made intentionally poorly, but the first one was about this bad, so it’s more likely producers were simply aiming for this not-funniness.

And how not-funny it is. Lowlights include —

As the movie is constantly telling us, Blart is, in fact, the bird, and his assaults are much more violent than anything displayed on screen. In this scene in which he is on the run from one of Vincent’s thugs, he dons costume wings before running onto a stage that he obviously doesn’t belong on. Why does he need the wings when he stands out like a sore thumb anyway? The movie is again drawing association between Blart and birds, which are extremely violent in this film. In the scene, he proceeds to bumble over all of the circus players, ending up as the only one on stage still on his own two feet. Like the rest of the film, Blart hurts people and it is played for laughs, but really the scene betrays a deep lust for violence within Blart. This is in line with other sinister subliminal plots within the first film.

The opportunity for something as awful as the first movie, a spectacular flop critically, to get a sequel was created when it was released on MLK weekend in 2009 against My Bloody Valentine, Notorious, Hotel for Dogs and Gran Torino in its second weekend. As the only thing even remotely family friendly that wasn’t about dogs on a three day weekend, placement is the only thing commendable about that film, and now, Sony’s gone and done it again, pushing this out with a week’s buffer on either side between Fast and Furious 7 and Avengers: Age of Ultron. The studio will surely have another hit on its hands, and surely find it within its heart to release a third of these atrocities eventually.

Don’t go see this. Please, God, don’t! Child 44 just released, True Story just released, Unfriended released and It Follows is still in theaters. There are so many better options. Only you can prevent bad sequels. Keep your money and prevent another one in this series.

Leopold Knopp is a formerly professional film critic, licensed massage therapist and journalism student at the University of North Texas. All-way stops are really, really terrible places to park. I’ve had a change of heart about reader input. It is now welcomed and encouraged. Like Reel Entropy on Facebook, follow it on Twitter @reelentropy, and shoot questions to reelentropy@gmail.com.

This entry was posted in Entropy and tagged #blartridesagain, #kevinjames, #sony. Bookmark the permalink.