Furious 7 a slight step down 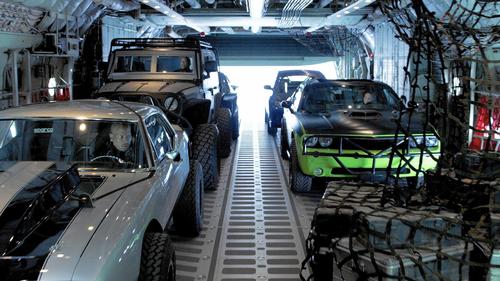 So, the grey ATV in this scene is bulletproof, and when the convoy opens fire, they all do this cool thing where the other cars pull back and line up behind it. But really, why was it at the back in the first place? It couldn’t be an issue of speed, since the car kept up with them on the way there. More to the point, why aren’t any of the other cars bulletproof? Photos courtesy Universal Pictures.

Binge-watching almost the entire Fast and the Furious series in preparation for Furious 7, I developed a bit of a soft spot for the series. For the first time, I was really able to appreciate action movies purely for the action. Instead of being tiresome, it was a fun and eye-opening binge, which is why Furious 7 was so disappointing.

The movie is set in motion when Deckard Shaw (Jason Statham), brother of Fast & Furious 6 villain Owen Shaw (Luke Evans), swears vengeance on Dominic Toretto (Vin Diesel) and his crew. He quickly hospitalizes Luke Hobbs (Dwayne Johnson) and kills Han Solo (Sung Kang) for their scheduling conflicts, then moves on to Toretto. After their initial clash, Toretto is approached by top government man Frank Petty (Kurt Russell), who assigns him to rescue Megan Ramsey (Nathalie Emmanuel), inventor of the God’s Eye tracking software that hacks into every camera in the world simultaneously, which Petty promises to loan Toretto so he can hunt Shaw on his own terms.

The key word with this movie is “overboard,” and it applies to just about every aspect in some very subtle ways.

It’s also overboard in terms of the plot. The movie introduces four new characters — Deckard Shaw, Petty, Ramsey and Mose Jakande (Djimon Hounsou) and crams in every single previous character whose actor could make it to production. They even give Owen Shaw, who got thrown out of a plane in the previous movie, a cameo, but none for Gisele Yashar who was thrown out of the same plane but died because Gal Gadot dumped the Fast/Furious series like hot garbage as soon as she got the Wonder Woman gig. This series zealously leaves the door open for actors to return and I get that, but they should all be necessary to the plot, and even most of the new characters can’t say that.

None of this is to say the stunts are unsatisfying. The stunts are completely amazing. You’re just kind of unsure why they’re doing them.

This movie should be about Shaw hunting Toretto and his team and their bond and the emotional toll their deaths take on Toretto, not this team-up-with-the-government nonsense. That plot mechanic is straight out of the old Godzilla movies where the Japanese government relied on a monster that originally represented lingering fears from the atomic bombings to save them from other monsters-of-the-week because the audience liked him, and for basically no other reason. The first Fast and the Furious was a showdown between a cop and a robber, but Toretto has been teaming up with international law enforcement agencies for three movies now. The audience likes him, I guess.

Instead, most of the film’s runtime — an outrageous 137 minutes — is devoted to this whole God’s Eye subplot, which in the end doesn’t make any difference even within that subplot. The point of that was to help Toretto find Shaw, but Shaw comes bursting into two chase scenes while they’re trying to get the software to find him. Even worse, the final showdown comes after they’ve lost access to the software, meaning Toretto is on the exact same footing when they finally do fight. Just kill him! He’s right in front of you!

The movie even goes overboard with its action. Nowhere is this more apparent than in the skydiving scene, where the crew attacks the convoy holding Ramsey by air in a 100 percent real stunt that took months of preparation and a full team of skydivers to shoot properly. Except they don’t. They actually parachute onto the mountain road and then attack the convoy by driving up to it, just like they could have otherwise. This incredible stunt that is the flagship of the film’s advertising and one of the crowning accomplishments of the series is actually a useless gimmick within the movie.

They go overboard with plot convenience. In the mountain road sequence, for example, Toretto is careening down the mountain off road and his main attacker impales himself on a fallen tree. It just as easily could have hit Toretto, but he was needed for the plot. In the tower-jumping sequence, this super-expensive, one-of-only-seven-in-the-world car that’s never been driven before somehow has no breaks so they have an excuse to jump it to the third tower. There are about six points at which you can hear the Cinemasins guy saying, “Yeah, no. They’re dead.”

Even the hand-to-hand stuff is a little sour. The opening fight between Shaw and Hobbs is poorly choreographed with Shaw taking punches to the face like he’s Agent Smith, and the sound effects are just bizarre. Movies have this down to a science, but in this scene, impacts sound like actors clapping on stage and missed blows sound like Mac from Always Sunny in Philadelphia vocalizing. There’s a cat fight in Fast & Furious 6, but it’s more of a fight between two characters who happen to be women. In Furious 7, they dress Letty Ortiz (Michelle Rodriguez) and Kara (Ronda Rousey) in ball gowns and spike heels and have them fight in a lavish sex suite. They even have a few of the prince’s special all-female guard as trash mobs to warm Ortiz up while Kara heaves herself around the room to build anticipation for the boss fight.

It’s all enjoyable and it’s all good fun, but Furious 7 crosses a few clear lines that set it apart as the worst member of the series, aside from those two that didn’t have Diesel in them. It’s all just a little too far overboard.

Leopold Knopp is a formerly professional film critic, licensed massage therapist and journalism student at the University of North Texas. I’ve had a change of heart about reader input. It is now welcomed and encouraged. Like Reel Entropy on Facebook, follow it on Twitter @reelentropy, and shoot questions to reelentropy@gmail.com.

Really the only part that isn’t overboard is the Paul Walker tribute before the credits. It isn’t a seamless transition from movie to tribute, but the scene is a real tearjerker. You may find it bootlegged, but it’s a little classless that NBC pulled the actual scene off of Youtube.