Kingsman wild, crass, not much fun

EVERYBODY IN THE MOSH PIT. Photos courtesy 20th Century Fox.

A wobbly adaptation of the six-issue Mark Millar limited series The Secret Service, the movie is a combination of willfully recycled rags-to-riches and super spy tropes. The main character, high school and military dropout Eggsy Unwin (Taron Egerton), lives with his mother (Samantha Womack), who is in a harshly abusive relationship with a local gang boss, when he is plucked from the slums by Galahad (Colin Firth), a member of an international spy agency conspicuously composed exclusively of British aristocrats who name themselves after knights of Arthurian legend. Unwin begins training to become the next Lancelot, while Internet magnate Richard Valentine (Samuel L. Jackson) lurks in the background.

This movie’s got jokes, but it can’t escape an overall sloppy nature and artistic purpose. There’s a lot of meta commentary, particularly in a scene between Galahad and Valentine in which they reminisce on older, sillier spy movies. Professor James Arnold was named Mark Hamill in the comic, so his character is renamed and they brought in Mark Hamill the actor to play him. It’s playful, and there are a lot of little bits of fun in there, but they’re not pervasive enough to save a movie that set out to combine archetypes and does a poor job of it.

Mark Hamill’s extended cameo is one of the better things about this movie. It’s a shame his career didn’t take off the way Harrison Ford’s did, the man can act.

In its heart of hearts, Kingsman: The Secret Service is that one hipster who listens to Katy Perry and Ariana Grande and says he does it “ironically” and seems to honestly believe this absolves him of the fact that he listens to Katy Perry and Ariana Grande. The movie is trying to satirize long-cliched plotlines, but it never rises beyond simply using them. Its product placement and particularly gross sexism also seems to be meant this way, and also doesn’t come off. Even when it’s “ironic,” it’s still product placement and it’s still sexism.

The class storyline starts out as a setting and an undertone, but eventually turns into a sore thumb for the film. Unwin’s living situation is truly dire. He’s in poverty, under gang rule and trapped with a violent stepfather. But after recruitment, his poor upbringing becomes something those mean other boys make fun of him for. As training progresses, their condescension becomes more and more of a distraction.

Playing it like an undercurent, like real-world classism, would have been a better route. Just put him in those poor-people clothes next to the late teens in four-figure suits that they think people actually wear, and leave it lie.

The other problem is, despite rich people all being bullies, they are also what Unwin aspires to become, and helping him into that culture is shot as an act of extreme kindness from Galahad and Roxy (Sophie Cookson), the stock nice and female trainee. The movie sends the overt message that the amount of pompous a person is correlates directly to their families’ wealth, but subliminally sends the message that everyone should dress and act like rich people do.

The spy element also never rises to the point of satire. The spy school sub-arc is predictable and stealthily pointless in that they’re not trained in the way the Kingsman organization actually functions. The first test involves one candidate dying and Merlin (Mark Strong) giving a lecture on teamwork, even though all the candidates are competing with each other for one open position and agents seem to work alone much of the time. Teamwork doesn’t seem like a relevant ability. In the last test, candidates must murder a dog and are disqualified if they show compassion, but all Kingsman show an abundance of compassion at every other opportunity. Not shown is the combat training, meaning Unwin’s competence at the climax is all gained offscreen.

This is particularly contradictory with Unwin. He refuses to shoot the dog, failing to become a Kingsman, but is much more ruthless than the other members of the organization in every other scene.

Roxy is at the center of a lot of the film’s really major sexism problem, along with Princess Tilde (Hanna Alström). She’s conspicuously the only female candidate for the Lancelot position, serving both as a token and one of the best candidates. At the climax, she’s sent into the outer atmosphere to perform a relatively menial task despite her paralyzing fear of heights and her being more qualified for the meatier, riskier mission so the main character can do Main Character things. Things like Tilde, who is a sex toy with a pulse. The film is trying to riff on spy movies’ sexist history, but it doesn’t feel like a riff. It just feels like a flareup of obvious, outdated objectification.

There are a lot of comparisons between this movie and 2010’s stellar Kick-Ass, another Millar comic that was also adapted by director Matthew Vaughn, and that’s a great movie to illustrate Kingsman’s shortcomings. Like Kick-Ass, the violence is rampant and beyond gleeful, but it isn’t twisted enough to work on the several levels that it does in Kick-Ass. Where Kingsman simply regurgitates its storylines, Kick-Ass is a long-form deconstruction of the tropes behind high school and superhero movies. Through its main characters we get all the listlessness, egotism, delusionality and damage required to actually try to be a superhero, and the action scenes support the characters’ arcs and themes. Kingsman has absolutely nothing in it that compares to this.

It’s the difference between The Matrix and its sequels. In one the action is meant to reinforce and help tell a compelling story. In the other, it’s something pretty to look at. 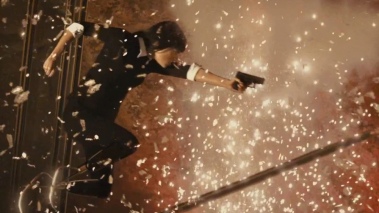 OK, what is going on with this girl? She’s got bladed leg prosthetics that are razor sharp, but she also runs on them, she’s Valentine’s only henchman and she has no authority, but at the same time seems to have a ton of agency — she seems like an interesting character, but nothing is said about her and she sort of stays in Valentine’s shadow.

Kingsman’s action sequences reflect this problem, as well. They all follow the style of this promotional clip (fight starts at 0:45). It looks like what they’ve done is shot it with a wide-angle lens and played with the cropping in post production so it looks like the camera is shaking with the action. It’s much more dizzying than dazzling, and the stunts themselves aren’t very interesting. I’d rather see a cool fight shot conventionally than a conventional fight shot bizarrely to make up for it.

This style also seems to have its genesis in this jaw-dropping sequence from Kick-Ass (fight starts at 0:20), and again the difference is clear. A slight crop shake is there to punctuate Big Daddy’s blows and gunshots, but not every single one of them, and they actually put the bad guys down so they are fewer in number to begin with. This is used in conjunction with jump cuts to tighten and add urgency to what actually looks like only a handful of shots, all supported by the guitar getting absolutely destroyed in the background. It’s easier to follow and more satisfying as a sequence.

Kingsman: The Secret Service is trying to cleverly blend genres into each other while satirizing them at the same time, but the end result is simply scatterbrained. It’s a jumbled mess of attempts to hit several different marks, most of which are overshot.

Joshua Knopp is a formerly professional film critic, licensed massage therapist and journalism student at the University of North Texas. My chocolate chip cookie yield has been low lately. Many seem to disappear before they’re served. I’ve had a change of heart about reader input. It is now welcomed and encouraged. Like Reel Entropy on Facebook, follow it on Twitter when I can be bothered to make one, and shoot questions to reelentropy@gmail.com.