Not what we had in mind

They’ve been talking about Ghostbusters 3 for 20 years solid now and nothing’s come of it, and after the death of Harold Ramis last year, nothing ever will. Having already made Ghostbusters 2 due to studio pressure despite writers Ramis and Dan Akroyd and director Ivan Reitman all being uncomfortable with it — and after the movie itself ended up being one of the most disappointing ever — Bill Murray has been repeatedly stamping out the idea of a third movie for 10 of those years. Akroyd had a script ready to go in 1999, though according to IGN it was terrible. Despite two animated series and several video games, it looked like Ghostbusters, a smash hit in its run and still recognized as one of the funniest movies ever made, would only have one movie in its progeny.

And every human creature in the world that didn’t stand to make a ton of money off a third movie was so, so OK with that. 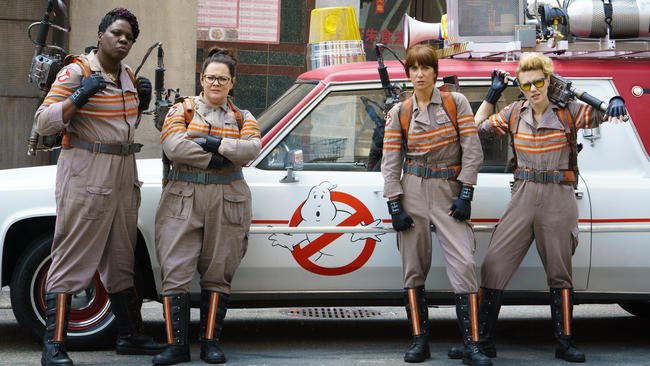 Yesterday, news dropped that a reboot directed by Paul Feig of Bridesmaids fame would star Kristen Wiig and Melissa McCarthy along with Leslie Jones and Kate McKinnon. It was also reported that Wiig’s character won’t be able to get a guy like always and McCarthy’s character will have a storyline where she’s insecure about her looks like always but somehow a lot of people will look past the traditional female characterizations use the movie to huff and puff about feminism because it casts women in traditionally male roles. That might have been an inference, I honestly can’t tell.

This whole thing Hollywood has with sequels and franchises, it’s ludicrous. It’s very clearly profit-based — the recent Taken series is a good example. With very small rewrites, those could have been completely unrelated movies. The big selling point — being Liam Neeson’s feature-length tryout video for the next Expendibles movie — was used to market three or four other completely unrelated movies within the time it took to push all the Taken movies out.

Star power being a more important marketing factor than plot counts doubly for comedies, where the main draw is sketches that are tied to the lead characters’ personalities and deliveries. A movie called Ghostbusters doesn’t necessarily imply a comic Freudian trio held together by Bill Murray’s deadpan character, but that’s what the movie is famous for. Functionally, other movies in Ghostbusters’ series are simply other collaborations between Ramis, Akroyd, Reitman and Murray, such as Caddyshack, Animal House and Groundhog Day. Their dynamics, and whatever dynamic Feig is going for, could easily go into any other setting.

But being part of a series adds a ton of financial security — Neeson’s lowest grossing movie in the period is The Grey at $77.3 million, but the lowest grossing Taken movie is at $208.5 million. However, if money and brand recognition is the goal here, they’d be just as well making another Bridesmaids movie. The first made $288.3 million, comparable to Ghostbusters’ $295.2 million.

There is simply no reason to reboot Ghostbusters. The creative team, one member of which is now dead, isn’t into it, and while I’d say there’s no reason if there were only no artistic reason, there’s also no economic reason. The new creative team they’ve brought in has already replicated that precise amount of success with an original movie, for which people are screaming for a sequel anyway.

This entry was posted in The Möbius strip, White Noise. Bookmark the permalink.

3 Responses to Not what we had in mind