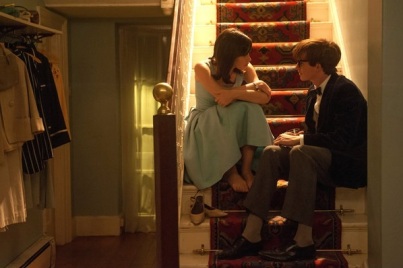 Stephen Hawking reportedly cried at a screening of his biopic and lent his own voice to the production.

The man is a physics wizard, but given this information, he might not know very much about movies.

Theory of Everything is a boring, standard, blow-by-blow breakdown of Hawking’s Wikipedia biography. Hawking, played by Eddie Redmayne, studies at Oxford while coming down with Lou Gehrig’s disease and meeting Jane Wilde (Felicity Jones), whom he marries after, like, one date. Then, later, they have children. Then, later, Hawking gets a doctorate. Then, later, some other stuff happens — it’s essentially a highlight reel of the man’s life from diagnosis to the knighthood he declined in ’89.

Director James Marsh might have never put down his copy of “Filmmaking for Dummies” while shooting this. There’s a lot of conventions in here that filmmaking textbooks say are good, but nothing is ever good just because that’s how the filmmaking textbook said it would be.

By run time, there’s more montage in this movie than scene, and they’re bad montages. Not the meaningful ones you’d see in a Nolan or Scorcese film, these are all bland, “time passes, stuff happens,” montages that are purely there to fill enough screen that audience feels like it got its money’s worth.

The movie doesn’t have a clear focus. It’s about Hawking’s life, but any human worth making a movie about has more aspects of his life than can really fit into one film.

“You know how black holes suck in everything that comes into their gravitational field and crush it into an infinitely small, infinitely dense speck? Well, there’s evidence suggesting that the universe began when one such speck exploded, bringing all matter into leg-stretching existence.” See? Two sentences. In two hours, they couldn’t dedicate two sentences to break down what Hawking was working on.

It’s not about his struggle with Lou Gehrig’s disease. There are a few shots at the beginning of Redmayne having difficulty walking and controlling his body, but his physical degeneration becomes a background feature soon after he looses the ability to walk. Despite being told — and this is true — he only had two years to live, the film does nothing to address or explain the miracle of Hawking’s continued existence. They only even name the disease once.

It’s not about his contributions to science. The movie is quite condescending about them, actually — Hawking wins a ton of awards and a lot of people say “he’s done it” at a few different points, but what he’s done is never clear. It isn’t a two-hour movie’s responsibility to fully explain “A Brief History of Time” and how black holes work, but a one- or two-sentence explanation of what he’s talking about would go a long way. Instead, he just says “space-time!” and they skip to the next segment after a quick montage.

It’s not about his relationship with Wilde Hawking. Well, it could be, but Wilde Hawking is the worst and I don’t want to watch a movie about his relationship with her. First, she insists on staying with Hawking as he looses all control over his body, then she cheats on him when she can’t handle it. Maybe she only thought she was signing up for two years, but that’s low.

The movie also tries to be about religion. This was a major point of friction between Hawking and his wife — she is a devout Christian, and ended up having an affair with and marrying choir director Jonathan Jones (Charlie Cox) — so it was intended as an aspect of their relationship, but it feels more like a ham-fisted attempt at resonance with a broader audience.

Hawking is, despite the poor explanations, discovering how the universe began, and Wilde Hawking quickly puts all of his discoveries in terms of whether or not they disprove God because she’s terrible at believing in things and thinks the Divine is something that can be proven or disproven.

Reportedly, neither partner was happy by the end of their marriage, and Hawking has said that his engagement to Wilde gave him a reason to live. This is a much more nuanced love story than the movie shows, and it does both former lovers a huge disservice. Photo by the Daily Mail.

The whole tragedy of their relationship could have been done well, but the highs all have too much of an air of happily-ever-after finality to them to be taken seriously and the lows are all choppily crammed in because the movie doesn’t want it to seem like Hawking can fail at things.

There’s a wonderful, heart-wrenching movie to be made about falling out of love based on their story, but this isn’t it. In this movie, their marriage is put into Hollywood terms and used mostly as a point of marketing.

Joshua Knopp is a formerly professional film critic, licensed massage therapist, journalism and film student at the University of North Texas and news editor for the NT Daily. Happy Thanksgiving! Try not to have this day precipitate any mass genocides! Oh, wait… I’ve had a change of heart about reader input. It is now welcomed and encouraged. Like Reel Entropy on Facebook, follow it on Twitter when I can be bothered to make one, and shoot questions to reelentropy@gmail.com.