Tim Mooney (Ansel Elgort) and Brandy Beltmeyer (Kaitlyn Denver) don’t feature heavily in the movie, but they do in the promotional material. This is critical — they are vital in the audience’s mind without having to actually be central to the film. Photos courtesy Paramount Pictures.

Based on Chad Kultgen’s 2011 novel, the film follows a wide range of high schoolers and parents as they navigate the new world of communication media. The Trubys, Don (Adam Sandler) and Helen (Rosemarie DeWitt), no longer desire each other sexually. Their son, Chris (Travis Tope) has become addicted to domination porn on the Internet without their knowledge. The Mooneys, Kent (Dean Norris) and his son, Tim (Ansel Elgort), deal with their wife and mother’s recent abandonment. Brandy Beltmeyer (Kaitlyn Denver) deals with her mother, Patricia (Jennifer Garner), monitoring her every post and message on electronic media. Joan Clint (Judy Greer) takes racy pictures of her daughter, Hannah (Olivia Crocicchia) in an attempt to jump-start an acting career. And Allison Doss (Elena Kampouris) navigates the cold world of body-image issues and self-imposed malnourishment after becoming annorexic with the help of Tumblr chatroom Pretty Girls Don’t Eat.

This movie is all about sex, but not sexy sex. It’s about unsexy sex.

The Trubys have their separate affairs. Don has nervewracking sex with a prostitute, then spends half of his $800 hour with her cuddling. Helen fumbles around explicit foreplay with the All-State Man, who she met online. “I want you to destroy me with your giant cock,” she stammers.

Hannah Clint (Olivia Crocicchia) gets her first glimpse of her crush’s perversion.

Doss seduces her crush, who had previously said he “would fuck her if he could find the hole,” driving her to her current annorexic state. However, Doss finds him to treat the whole thing like a casual business deal.

“Look, I’m not a rapist or anything,” he passive-aggressively spits at her after she hesitates. “We can stop if you want to.”

Hannah Clint and Chris Truby have extremely awkward phone sex and then even more awkward in-person sex. Clint balks at Truby’s addiction-driven impotence, but spreads rumors of their encounter for her own social gain.

Tim Mooney and Brandy Beltmeyer don’t have sex. Brandy can’t communicate the evil electronic way because of her mother, so their relationship is naturally more pure. The power couple from the trailers is distinctly in the background during the movie.

Kent Mooney tentatively rebounds with Joan Clint, a pairing that will be particularly important to television fans.

In all cases, there is sex but no lust. There’s no French kissing, crashing into the china and not noticing while wrapped around each other like crumpled up iPhone ear buds. Characters agree, formally, to copulate, then disrobe with their backs to each other. They get under the covers and lie next to each other, silently, until one works up the nerve to mount the other. 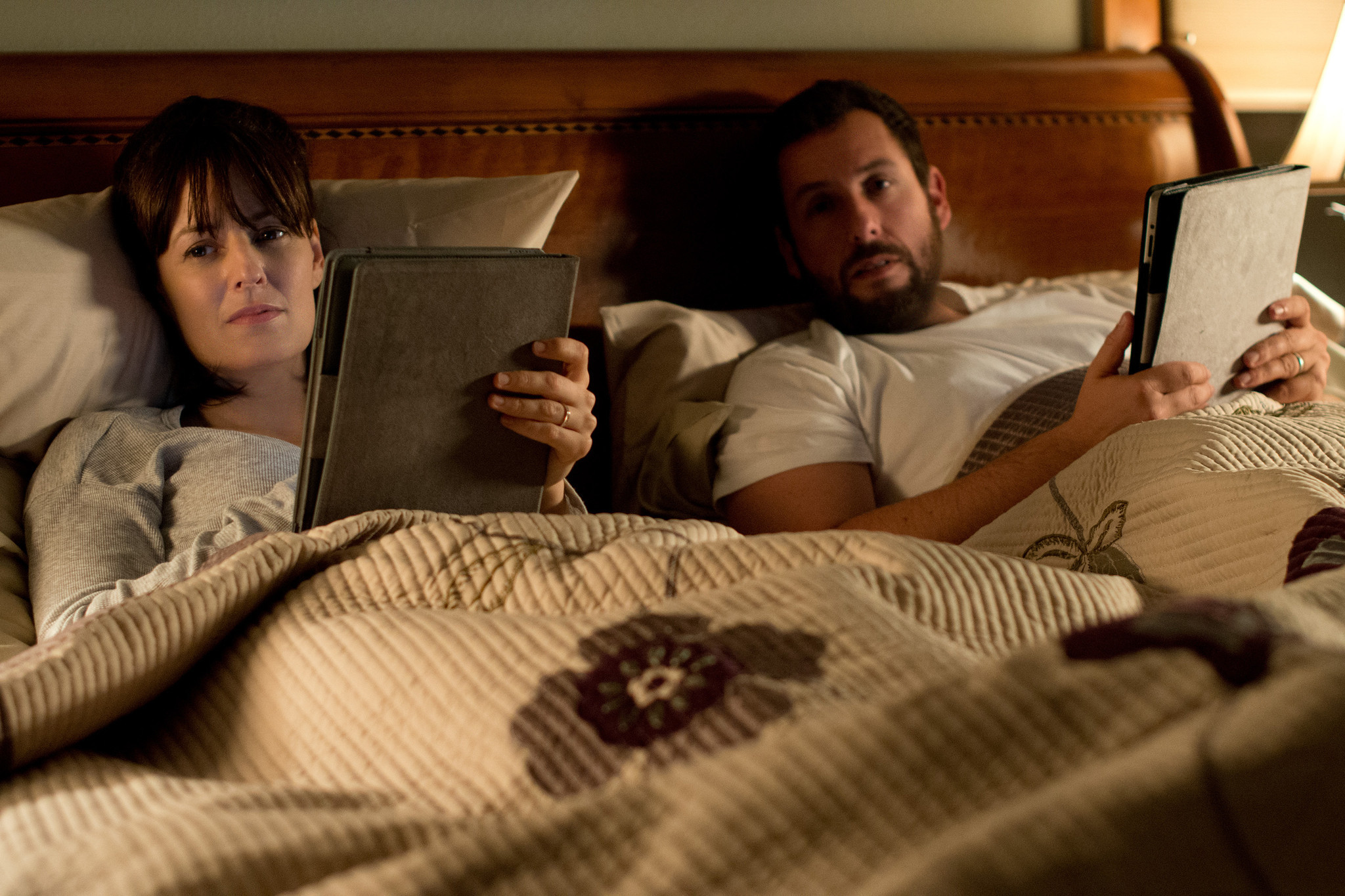 Helen (Rosemarie DeWitt) and Don Truby (Adam Sandler) look up longingly from playing Scrabble with each other on their iPads and not talking when an advertisement for a discreet dating service for married people comes on.

All of them, but Hannah Clint in particular, shoots her partner a brief glare. How dare you get so close to me, she asks with her brief, narrow-eyed scowl. Can’t you give me some personal space while you fuck me?

The point of the movie, which is broken over the audience’s head like a poorly built bar stool, is that this generation is much less connected than any previous — more specifically, that it puts a much smaller emphasis on genuine connection — despite all the tools available to connect with.

Sex, the height of social interaction for most single people, is what writer/director/producer Jason Reitman uses to examine this.

Two couples feature one participant trying to genuinely connect to the other while the unaffectionate partner is befuddled by their actions that aren’t sexual. One couple used to be affectionate but can’t be any longer. The one couple that’s young and in love is pushed aside, despite featuring heavily in advertising.

Men, Women & Children tries to be a little too broad. It is constantly cutting back to shots of the Voyager Space Probe and detailing the contents of its golden discs. Narration explains the connection to the rest of the plot. And continues to explain it. And eventually beings to destroy the audience with it. “I want you to destroy me with your giant social commentary,” Reitman must have heard the audience say.

The aggressive moral has turned off several critics, as has the fact that Spike Jonze, another filmmaker with a penchant for emotional brutality, made a similar movie last year.

But Her was a fantasy about The ultimate result of a generation that interacts through screens more often than each other. Theodore Twombly (Joaquin Phoenix) cuts out the other person and falls in love with the middle man. Men, Women & Children is about the insanely impersonal personal interactions that happen every day.

Americans idolize the movies. We sympathize with the characters because they are idealized versions of ourselves. This movie takes real casual human interaction and films it, implicitly comparing it with the idealized movies. Ironically, it is reminiscent of Jonze’s Where the Wild Things Are more than Reitman’s Up in the Air. It’s an especially somber film that clearly disapproves of its subject matter.

It’ll be much more meaningful to a younger audience — hence the distinct lack of critical acclaim. But it’s released at the start of Oscar season in Oscar bait fashion, so it will probably end up with at least a couple of nominations despite it’s 29 percent rating on Rotten Tomatoes. It is unclear whether or not a particular person will enjoy this film.

Joshua Knopp is a formerly professional film critic, licensed massage therapist, journalism and film student at the University of North Texas and news editor for the NT Daily. I’ve had a change of heart about reader input. It is now welcomed and encouraged. Like Reel Entropy on Facebook, follow it on Twitter when I can be bothered to make one, and shoot questions to reelentropy@gmail.com.