How to trip over common pitfalls

Hiccup (Jay Baruchel) has the coolest flight suit in this movie. And a lightsaber, apparently. Photos courtesy 20th Century Fox

What is there to say about How to Train Your Dragon 2?

Its several plot lines defy any strong description. The movie starts with Hiccup (Jay Baruchel) and his dragon, Toothless, mapping out the surroundings of their island home, Berk. During their cartography, they come across another group building up a dragon army to take over the surroundings. This yields the movie’s main antagonist, Drago Bludfist (Djimon Honsou).

Hiccup’s father, Stoick (Gerard Butler) wants to make him chief, but Hiccup doesn’t want to be chief, and so there’s a whole “But father, I just want to sing!” element. He also runs across his long-lost mother (Cate Blanchett) in a plotline that’s mostly there to make people sad later.

The movie definitely isn’t good, but it’s not exactly bad either. It’s a kid’s movie and a sequel, and it comes with a lot of generally accepted indiscretions for kids’ movies and sequels. There’s a lot of muted toilet humor, the kind of draw-laughs-through-discomfort jokes that fit the profile of raunchier, more adult-oriented comedies but are toned down for kids and won’t make anyone else very uncomfortable. There are also quite a few short-attention-span breaks, scenes that don’t contribute much but are fun to look at and function mostly as a random dance break.

As a sequel, it’s actually quite poor. It continues to shove annoying, dull secondary characters in the audience’s face. It isn’t darker or grittier, it doesn’t build on the first movie’s story as much it intrudes on the continuity and it doesn’t end in a cliffhanger, which is an enormous cop-out given how rushed the climactic battle is and the fact that a third movie was already green-lit way back in December 2010.

It isn’t boring, but it definitely isn’t entertaining. Strangely, the best parts are those intermissions for the kids, particularly the ones featuring Hiccup’s awesome flight suit. It’s fun, but not really engaging. The story is also quite garbled and caught up in its side-arcs. There’s no real focus.

The whole movie is just sort of… there. It’s really sad to see. The first How to Train Your Dragon created a spectacular world that was clearly nurtured and well thought out. This film smacks of a studio that refused to take risks. It just sort of rearranges the themes and images from the first movie, but doesn’t go anywhere new with them. 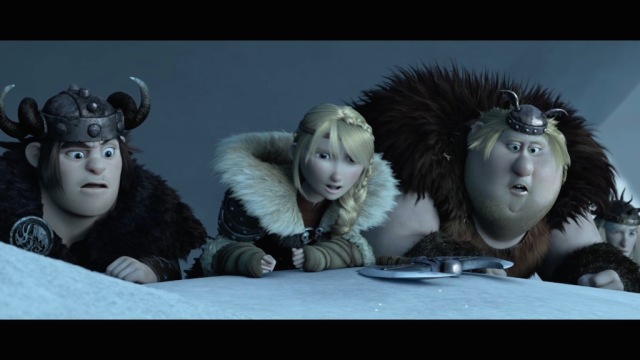 They’re SO annoying! Why? Why do these characters exist? Why do I have to sit through these effigies of adolescence making googly eyes at each other? They were supposed to be young adults in this movie, well passed the hormone-enslaved stage.

A couple of ethical sub-themes that need to be pointed out — it’s very unclear how the dragons are supposed to be viewed. They’re brought to life as cats and dogs but anthropomorphized to a significant degree, and also reduced to hive-minded insects during later parts of the film. All of this while being treated like horses, essentially. It’s mostly ignored within the films, but what is the humane way to treat a dragon? Are they pets or equals? There’s gray area here, and that’s bad.

Second, as “TV Guide’s” Perry Siebert writes, the main arc of the movie is about good guys with dragons vs. bad guys with dragons, and how controlling more dragons means having a stronger army. It resonates eerily with the current gun control debate, to the point that there could be some indoctrination at play. You might want to talk with your kids about this one.

Joshua Knopp is a formerly professional film critic, licensed massage therapist, journalism and film student at the University of North Texas and a senior staff writer for the NT Daily. I think Paula Patton might actually die of embarrassment if this keeps going on.  For questions, rebuttals and further guidance about cinema, you can reach him at reelentropy@gmail.com. At this point, I’d like to remind you that you shouldn’t actually go to movies and form your own opinions. That’s what I’m here for.