1954- Godzilla. Less than 10 years after Japan lost two cities to nuclear attacks, Toho produces a major motion picture about a giant monster born of nuclear radiation terrorizing the island nation. While he immediately got friendlier in more kid-oriented sequels, Godzilla has always been a symbol for nuclear devastation. An American version is produced with Canadian actor Raymond Burr spliced in as journalist Steve Martin.

1955- Godzilla Raids Again. Features first instance of Godzilla fighting another monster, which becomes a constant through the rest of the films. The American version renames him Gigantes and gives him a different origin in an attempt to pass him off as an original character. It doesn’t go over well. The monster Godzilla fights, Anguirus, becomes an ally in later films as a bizarre WWE-style hierarchy of heroes and villains emerges.

The poster for the first Godzilla movie.

1962- King Kong vs. Godzilla. Toho celebrated its 30th anniversary with this film. This is still the most successful Godzilla movie, turning production costs of ¥5 million into ¥350 million in Japan. Toho begins to produce Godzilla movies with greater regularity in light of their return on investment (they did not have the rights to King Kong).

1964- Mothra vs. Godzilla. In light of last year’s success, Toho begins putting its monsters in the same movie with regularity. This is the first such instance, and is regarded as on of the best Godzilla movies today. Mothra had been introduced in her own feature three years earlier.

1964- Ghidorah, the Three-Headed Monster. Godzilla, Mothra and Rodan, another of Toho’s properties who first appeared in 1956, team up to fight King Ghidorah, a three-headed dragon from outer space. This is where Godzilla really starts to become a good guy.

1965- Invasion of the Astro-Monster. Scientists discover Planet X, a populated planet hiding on the other side of Jupiter. The Xians had captured Ghidorah and proceed to capture Godzilla and Rodan as well, then use them to attack Earth.

1966- Godzilla vs. the Sea Monster. Godzilla goes on an island adventure to fight Ebirah, a gigantic lobster.

1967- Son of Godzilla. Godzilla has a baby. Films are aimed almost completely at children at this point. Godzilla is an entirely sympathetic anthropomorphized heroic character.

1968- Destroy All Monsters. All 11 of Toho’s monster properties appear in what was intended to be Godzilla’s final appearance in film, and was indeed the last Godzilla movie produced by his original creators. Ten good monsters, under Godzilla’s leadership, team up to fight off Ghidorah once and for all, and then return to Monster Island to live in peace. Modern critics have praised the film.

1969- All Monsters Attack. A year later, Destroy All Monsters turns out to not be Godzilla’s last feature, much to the world’s surprise.

1973-  Godzilla vs. Megalon. Film is actually intended as a vehicle for Jet Jaguar. Though critics favored it, fans of the genre speak of this as rock bottom for Godzilla in his transformation into throw-away children’s entertainment. 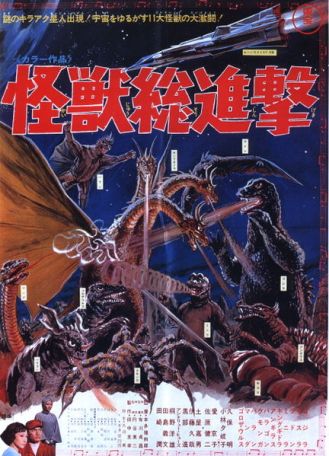 1975- Terror of Mechagodzilla. The lowest-grossing Godzilla movie at the time. The Shōwa film series, characterized by Godzilla’s steady devolution from a monstrous representation of nuclear fallout into a very weird hero, finally cuts off here.

1984- The Return of Godzilla. The 30th anniversary feature. This film marks the beginning of the Heisei series and acts as a direct sequel to the 1954 original. Godzilla is once again a raging monster with strong nuclear overtones. Burr reprises his roll for the first time in the American release.

1989- Godzilla vs. Biollante. The reboot returns to a monster vs. monster structure, this time featuring a new enemy monster instead of another Toho property. Film is a box office disappointment and producers decide to return to classic foes in later movies.

1994- Godzilla vs. SpaceGodzilla. Because audiences care so little about the villain, we may as well make it another Godzilla.

1995- Godzilla vs. Destroyah. Toho announces they will finally kill Godzilla in this film to make way for the universally reviled American production in 1998. As an indicator of what the rest of the world thought about Godzilla at this point, the majority of the past five movies were released direct-to-video in English. This is the last film of the Heisei series, which was characterized by rejecting Shōwa conventions and then conforming to them to an absolute T.

1999- Godzilla 2000: Millennium. Toho turns back the clock again and produces a third movie meant to be the original’s direct sequel.

2000- Godzilla vs. Megaguirus. Toho has just stopped even talking about their movies’ relationships to each other at this point.

2001- Godzilla, Mothra and King Ghidorah: Giant Monsters All-Out Attack. Godzilla is possessed by the spirits of Japanese World War II veterans who want to take revenge on a country that forgot their sacrifices. Japanese residents release the three guardian monsters, Mothra, Ghidorah and Baragon, to stop him. All monsters are killed.

2002- Godzilla against Mechagodzilla. Toho tries its hand at this whole “continuity” concept again, but at this point it is too mangled to keep track of. Producers pick and choose which previous movies they want to apply and I’m too lazy to go through them all.

2004- Godzilla: Final Wars. 50th anniversary special. Planet X invades and unleashes a legion of giant monsters across Earth. The handful of remaining humans travel to the south pole to free Godzilla from his prison. Toho announces they will not make another Godzilla movie for 10 years.

2014- Godzilla. Finally coming back to the present. The 60th anniversary will not feature a Japanese production, but rather this American one. The trailers stress Godzilla’s status as a force of nature, and feature several tidal waves. It will be interesting to see if this version is in any way reflective of Japan’s recent natural disasters. Reviews have been largely positive.

Joshua Knopp is a formerly professional film critic, licensed massage therapist, journalism and film student at the University of North Texas and a senior staff writer for the NT Daily. Rest in peace, H.R. Giger.  For questions, rebuttals and further guidance about cinema, you can reach him at reelentropy@gmail.com. At this point, I’d like to remind you that you shouldn’t actually go to movies and form your own opinions. That’s what I’m here for.

1 Response to 60 years of Godzilla