It’s an action star vehicle, but get this — it’s about vehicles!

Remember this, Hollywood? A man who can pull this look off with a straight face doesn’t need to prove himself a movie star. Photo courtesy AMC

Need for Speed’s function is to help Aaron Paul transition from Breaking Bad to movie stardom, and like most vehicle movies it’s destined to be thrown on a pile of the star’s better work or grouped with other poor showings in a quadruple-feature package of outdated home movie technology. That’s all it was designed to be, and that’s all it is.

This one is particularly sad to see. Paul always had the movie-star good looks and already demonstrated sufficient range in the series where he made his name. He doesn’t need vehicles to pump his tires. He’s a talented, popular, recognizable actor. Put him in a regular movie that seems to have genuine effort put into it and the audience will come.

The reason Need for Speed is so sad is this movie makes that less likely to happen. Paul initially tried out for the villain role, a spot where he actually could have showcased talent and was better suited for than the man who eventually got the part (Dominic Cooper, a fine actor in his own right). But the producers put him in the lead role to better sell the movie on the strength of his popularity, and after a poor marketing campaign, the movie opened in third place after the week-old Mr. Peabody & Sherman and 300: Rise of an Empire.

According to boxofficemojo.com projections, Need for Speed will end up about $16 million in the red. Producers will blame Paul and it will become much harder for him to find work, despite none of this being his fault or anything he even remotely controls.

The meat of the movie doesn’t really matter, but we’ll go over it anyway. Paul plays Tobey Marshall, an unprofitable mechanic who balances it out as a very profitable underground street racer. After 45 minutes of pipe laying, Marshall gets into a race with his archrival, Dino Brewster (Cooper) and Little Pete Coleman (Harrison Gilbertson), a member of Marshall’s crew and a completely unlikable twerp whom viewers will want to strangle anyway. Brewster kills Coleman and lets Marshall take the fall. Two years later, Marshall returns and gathers his old garage/underground street racing crew and an obligatory female to get revenge on Brewster. 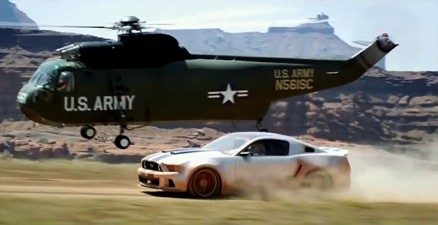 The film also departs from reality in police action. In reality, cops probably would have had a much easier time stopping races than they did in the movie, and Benny probably would have been taken out back and shot for hijacking this military helicopter. Photo courtesy Walt Disney Studios Motion Pictures.

The biggest problem with Need for Speed is its characters are terrible. Marshall is mildly likable only because the plot is centered around him and Brewster is fun to dislike because, again, Cooper is a fine actor. But everyone else, just ugh.

The obligatory female, Julia Maddon (Imogen Poots) tries valiantly to have character traits beyond a British accent and long hair. It’s almost cute. But in the end, she’s everything wrong with women in Hollywood. Marshall’s crew is annoying and stupid. Coleman a grease stain of a human being, something you want desperately to go away but is going to be in a pivotal position no matter what you do.

The movie’s other enormous problem is the time viewers will have to spend with this unlikable hodge-podge — both in real time and time within the diagesis.

Marshall’s plot to avenge himself on Brewster involves getting from Mount Kisco, NY to California in 45 hours. Google Maps estimates the trip only taking 43 hours, giving the characters a little more room for error than they think they have, but still a tall task.

The trip is filled to the brim with bizarre temporal anomalies. In one scene, Marshall and his helpers execute a refuel at 80 mph, saving all of two minutes for an incredibly risky stunt, and in another Marshall and Maddon save all of 10 seconds changing seats without stopping. The characters are obviously treating this with desperation.

But at the same time, they’re willing to stop in Detroit to analyze the way the car is leaning for repairs they never actually make. Marshall is supposedly in God’s own Mustang for the journey and taking it to the absolute limit, but Benny (Scott Mescudi), his eye in the sky, has time to steal a news and military helicopter while following along the way. Joe Peck (Ramón Rodriguez) and Finn (Rami Malek), in the gigantic truck capable of a rolling refuel and other utilities, magically teleport ahead of Marshall as the plot demands so they can be shoved further down the audience’s throat.

In real time, the movie runs 130 minutes, but it could easily have been 100. Slow motion is used in all the wrong spots, and the film spends time in awkward corners of scenes. After the rolling refuel, for instance, there’s about 20 seconds of Finn celebrating its successful execution as the Mustang speeds off, only to be overtaken by the truck’s teleportation powers when it is next needed. It’s not just boring, it’s incredibly ostentatious — everyone with a car refuels regularly at a gas station without any incident.

To be fair, Marshall and Maddon would later make a more traditional pit stop and bungle the whole thing terribly, but I’d had it with Need for Speed by that point.

Joshua Knopp is a formerly professional film critic, licensed massage therapist, journalism and film student at the University of North Texas and a senior staff writer for the NT Daily. Yes, the founder of the Westboro Baptist Church is dying. No, it is not OK to celebrate his death. For questions, rebuttals and further guidance about cinema, you can reach him at reelentropy@gmail.com. At this point, I’d like to remind you that you shouldn’t actually go to movies and form your own opinions. That’s what I’m here for.

Paul can growl and grunt with the best of them, but that’s about all his character does. It would have been fun to see him play as the arrogant, selfish Brewster, a role in which Cooper seems uncomfortable.

1 Response to It’s an action star vehicle, but get this — it’s about vehicles!