Posted on January 1, 2014 by reelentropy 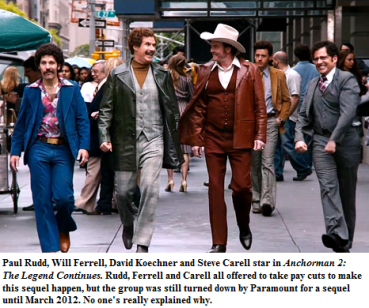 Anchorman 2: The Legend Continues is exactly the movie Anchorman fans have been clamoring for for nine years. For better or worse.

In it, Ron Burgandy (Will Ferrell, who also produces and writes) returns in full salon-quality glory. He’s swiftly fired and separated from wife and co-anchor Veronica Corningstone (Christina Applegate) after she is just as swiftly promoted. Six months later, Burgandy returns to New York to be a part of GNN, the first 24-hour news network.

Anchorman 2 plays like a better, more Anchormany version of Anchorman, with higher highs and lower lows than the 2004 hit.

It’s easy to see that Ferrell and director/writer/producer Adam McKay got their starts on Saturday Night Live. It’s also apparent that Saturday Night Live hasn’t been all that great since before they started middle school. The sketch comedy’s MO is to put a random assortment of weird characters in the same room and then let the sketch run so long it can hardly be called a sketch anymore. As a writing duo, this is all Ferrell and McKay know how to do.

That said, their sketches are more absurd and better tied together than the average SNL romp, even more so in Anchorman 2.

While improving on the raw laugh level, Anchorman 2 also improves on the first movie’s satirical premise. Anchorman, in theory, satirizes chauvinism in the ’70s, but is really just an excuse to be awful toward Applegate. Anchorman 2 is satirizing the 24-hour news paradigm, and it never loses sight of that.

Throughout the movie, Burgandy’s stories degenerate into the optimistic drivel 24-hour news networks have been feeding us for years. In the diagesis, he ends up being credited with the paradigm shift personally. That statement alone makes Anchorman 2 an effective satire — only an anchor as stupid as Ron Burgandy could come up with this view of “news.” As a newsman, it feels like watching a funnier version of Paradise Lost.

This sequel is stronger than the first movie in pretty much every way, and the mass popular demand that drove its production indicates that it’s exactly what people want to see. They pull off  an odd combination of low-brow scene-to-scene humor pasted on a high-brow concept. It’s definitely not something you see every day, and whether or not the style of comedy appeals to individual viewers, this film does have its own unique place.

Joshua Knopp is a formerly professional film critic, licensed massage therapist, journalism and film student at the University of North Texas and a senior staff writer for the NT Daily. You stay classy, 2010s. For questions, rebuttals and further guidance about cinema, you can reach him at reelentropy@gmail.com. At this point, I’d like to remind you that you shouldn’t actually go to movies and form your own opinions. That’s what I’m here for. Keep reading, the data-dump has just begun.