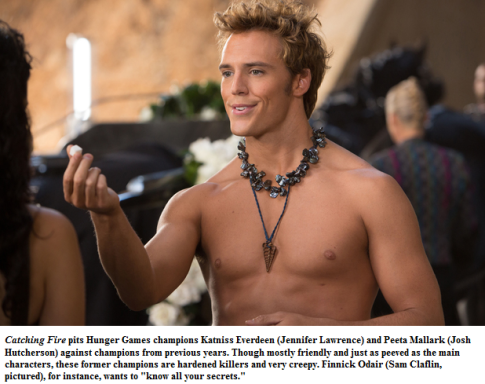 Catching Fire is, for the most part, just as good as The Hunger Games.

While the first movie put Katniss Everdeen (Jennifer Lawrence) into a mess of teenagers trying to kill each other, this film puts her in even less comfortable territory — on a public relations tour for the government that stuck her in the first mess pretending to be in love with Peeta Mallark (Josh Hutcherson). When the facade fails, the government makes some rule changes so they can throw her back into a mess of adults who are also former Hunger Games champions.

Catching Fire features one of the best casts in a long time. Lawrence is the real thing. Her character’s anti-social behavior and paranoid survivalism would make for a potent performance even without the knowledge that she’s a charming, candid interview in real life. The always excellent Philip Seymour Hoffman joins the cast as the new gamemaker. He and Jena Malorne, Jeffrey Wright and Woody Harrelson lead an extraordinary cast of secondary characters.

Fresh director Francis Lawrence doesn’t quite live up to Gary Ross, who everyone thought was coming back after directing The Hunger Games, but his minimalist hand guides the film well. The love triangle that punishes this series with unwarranted comparisons to Twilight is all but left out. The characters’ raw desperation shines through beautifully.

Sadly, the pacing is just barely on the wrong side of perfect, and that can throw off an entire movie. The film seems impatient through its admittedly long first act, and the most interesting part of the movie suffers. We’ve already seen the pagentry and trauma that go into a Hunger Games tournament, and the differences are easy to pick up on. It would have been great to see more detail put into confrontations between Everdeen and President Snow (Donald Sutherland) and Snow and Plutarch Heavensbee (Hoffman).

With a poorly paced beginning and an ending that is horribly reminiscent of The Matrix Reloaded, Catching Fire is far from perfect. But it’s very good, and probably the best thing out this Thanksgiving.

Joshua Knopp is a formerly professional film critic, licensed massage therapist, journalism and film student at the University of North Texas and a senior staff writer for the NT Daily. Happy commercialized harvest festival.  For questions, rebuttals and further guidance about cinema, you can reach him at reelentropy@gmail.com. At this point, I’d like to remind you that you shouldn’t actually go to movies and form your own opinions. That’s what I’m here for. Be sure to come back in a couple of weeks for a review of Inside Llewyn Davis.