12 Years a Slave is fantastic, but you won’t enjoy it

Posted on November 7, 2013 by reelentropy

“In time, your children will be forgotten.”

That’s the kind of cheery comfort you can expect heading into 12 Years a Slave. 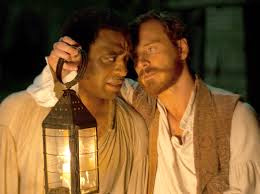 Sadistic, alcoholic plantation owner Edwin Epps (Michael Fassbender) and Solomon Northup (Chiwetel Ejiofor), an enslaved freeman who was taken from his home in New York, have some midnight male bonding time in 12 Years a Slave.

The movie tells the true story of Solomon Northup (Chiwetel Ejiofor), a skilled, black violinist living with his wife and children in New York in 1841. Northup is kidnapped, enslaved and shipped to New Orleans for sale. After 12 years of Jamie Foxx never showing up to kill every white man on screen, Northup finally gets a letter away to his family, who prove his freedom.

12 Years a Slave is going to be required viewing for any film class worth its salt, one of those rare films that will both win and deserve its Oscars, but it’s not perfect.

It’s got that art film stink about it that awards voters love. The cast hinges on a lead nobody’s ever heard of, and he’s surrounded by an all-star team (Michael Fassbender, Benedict Cumberbatch, Paul Giamatti). The score is barely-existent and only ever repeats a few notes. The whole thing is a bit of a transparent pull on liberal sensibilities, although you’d have to be pretty damn conservative to be OK with the abuse Northup endures under the pretense that it was legal at the time.

I’m not Steve McQueen’s biggest fan. His films tend toward a bleak minimalism that make you not want to watch them again, no matter how good they are.

However, it is all these imperfections that loop back and bring out 12 Years A Slave’s harsh beauty. The cast is excellent. The lack of instrumental music allows the constant, vile sounds of physical abuse to take over the background.

This is a film about a culture of rape (literal, figurative and artistic) and enslavement. This is a film about people who are OK with the mortal discomfort of everyone around them. Bleakness is really the only tone you could take. And if you want to watch this movie more than once, there is something fundamentally wrong with you. 12 Yeas a Slave is excellent, but it’s not meant to be enjoyed.

There’s been noise about this being the first slavery film that doesn’t lend any olive branches to whites in the audience, and sadly, that’s not quite true. In the end, it’s a white man (Brad Pitt, the same white man who produces, which can’t be a coincidence) that gets Northup out of his prison. But it’s a lot better than Lincoln and Django.

Last year, the best picture stand featured a sharp dissonance among its ridiculous 10 finalists — both Lincoln and Django Unchained were nominees. Aside from one being mind-numbingly boring and the other being wildly entertaining, Lincoln is yet another movie about old, rich white men talking about how awful slavery is. Django is about the brutality required to keep an entire race of human beings in line.

Quentin Tarantino makes a movie that’s much easier to swallow than 12 Years a Slave, but it’s a huge step up from movies about white politicians saving all the blacks. 12 Years takes that a step further by not having Christoph Waltz hold the lead character’s hand through the film. McQueen has the additional authenticity of being a black person in real life.

Pretty much everyone who thinks slavery was something mild enough that it can be put “in the past” needs to see this movie, and it is truly excellent, but I’d be hard-pressed to recommend it for a majority of audiences. It is very much not for the faint of heart.

Joshua Knopp is a formerly professional film critic, licensed massage therapist, journalism and film student at the University of North Texas and a senior staff writer for the NT Daily. The Counselor wasn’t playing in Denton and I’ve been busy with school and work, bite me.  For questions, rebuttals and further guidance about cinema, you can reach him at reelentropy@gmail.com. At this point, I’d like to remind you that you shouldn’t actually go to movies and form your own opinions. That’s what I’m here for. Be sure to come back next week for a review of Thor: the Dark World.