Film puts audience in a worse prison than its characters 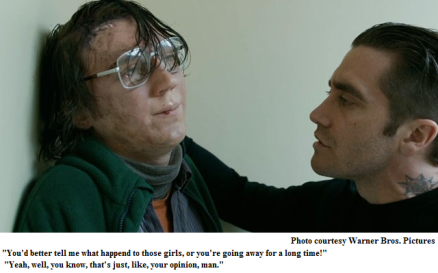 Prisoners wants to be an intense examination about the lengths a man would go to to get his child back, but really it’s just boring.

The audience is supposed to get behind Keller Dover (Hugh Jackman), a Christian, carpenter and hunter who thinks the national anthem is a pretty song and not just something you sing before sports events. While celebrating Thanksgiving with the Birchs (Terrance Howard, Viola Davis), both families’ young daughters disappear. Dover fixates on the primary suspect (Paul Dano) after the suspect is released because he’s too stupid to have committed the crime.

The movie pits Dover against his own better nature as he tries to figure out where the girls were taken. In one storyline, he kidnaps and tortures the invalid. This seems to be the film’s main advertised storyline.

To say this movie stops and smells the roses is putting it mildly. Its various plots are all lightly connected – it’s all got something to do with the prisons the characters put themselves in. Dover is caught in his violent fixation on Dano’s character, Dano and the missing children are literally imprisoned, Dover’s wife can’t get out of bed, etcetera.

But, in theory, a film can do that without taking the audience through every detail of two or three lives over six days. If Prisoners had picked a main character and stuck with him, it wouldn’t be so long, it wouldn’t have had so many dull bits and it still would have been able to express the “prisons” theme well enough.

What really should have happened, though, would be a rewrite into a comedy. All the characters are there – a die-hard conservative, a passive liberal, a straight detective and a man-child with the IQ of a 10-year-old all fumble around two kidnappings in a convoluted plot that doesn’t really matter in the end. Sounds just like The Big Lebowski, doesn’t it? This plot would have worked well in a similar, genre-mash aesthetic.

As it is, Prisoners is deeply flawed and there isn’t really any point to watching it. Director Denis Villeneuvre doesn’t create an atmosphere intense enough to be a reward in its own right. The plot twists are telegraphed and ineffective. There are better, shorter movies available through just about every avenue.

Joshua Knopp is a formerly professional film critic, licensed massage therapist, journalism and film student at the University of North Texas and a staff writer for the NT Daily. If you strike him down, he will be come more powerful than you can possibly imagine. For questions, rebuttals and further guidance about cinema, you can reach him at reelentropy@gmail.com. At this point, I’d like to remind you that you shouldn’t actually go to movies and form your own opinions. That’s what I’m here for. Be sure to come back later in the week for reviews of Don Jon and Rush.