Wolverine not as good as it needs to be 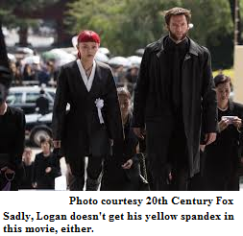 It’s important that The Wolverine be a good movie, and… it is… kind of…

The film follows Marvel’s indestructible-yet-oddly-sympathetic superhero (Hugh Jackman, who also produces) as he wanders to Japan to say goodbye to a man whose life he’d saved in World War II. Set after X-Men 3, Logan fights depression over killing Jean Grey (Framke Janssen) and is reluctant to return to violent heroism. However, a bizarre combination of plots make him the only line of defense for Mariko Yashida (Tao Okamoto), who is/will become one of the most powerful people in corporate Japan.

Modern American superhero trilogies have been around for 13 years now, and The Wolverine instantly becomes the best part three the trend has produced (no, it’s not technically the third movie in a series of three, but the basic character arc indicates that blah blah blah it’s a part three OK? Deal with it). Comparing it to such catastrophes as Spider-Man 3 and The Dark Knight Rises is a low bar to set, but it’s fun to see the end of the story arc executed well.

Because The Wolverine is the only movie in its class that’s not completely stupid, I like this movie a lot more than I should. It’s not like the movie is bad, exactly. The action is wild and fun, particularly the bullet-train sequence. Wolverine’s odd chemistry with samurai culture is on full display, and they don’t get too far on the romantic or anti-foreign sides of the scale. Jackman is up to par, as usual, and the Wolverine he brings to life in this movie is particularly emotional. Comedy is well-placed and genuine.

Sadly, speaking objectively, The Wolverine’s flaws do outweigh its good points. The dialogue always has a poorly-thought-out undercurrent, and though it never becomes stupid outright, some of Logan’s lines are pretty wacky. It’s tough to track some of the characters’ motivations. The last act kind of falls apart.

It’s good. It should be good. It needs to be good. It’s… OK. Older fans of the comic book character will get to see a good storyline brought to life, along with great if obscure villains like Silver Samurai and Lady Hydra. Fans of the film character, now his own entity, will get to see him finish his journey, for once in an acceptable film.

It’s just not as good as I want it to be.

X-Men: The Days of Future Past is scheduled to come out next year, and is a prime candidate to completely alienate comic fans from adaptations if it’s done poorly. That’ll probably be just OK too. Dealing now with time and multiple Professor X’s and Magneto’s, the X-Men cinematic universe is teetering on the brink of incredible silliness. Here’s hoping they do it right.

Joshua Knopp is a formerly professional film critic, licensed massage therapist, journalism and film student at the University of North Texas and a staff writer for the NT Daily. If you spoil Breaking Bad for him, he might actually kill you. For questions, rebuttals and further guidance about cinema, you can reach him at reelentropy@gmail.com. At this point, I’d like to remind you that you shouldn’t actually go to movies and form your own opinions. That’s what I’m here for. Be sure to come back tomorrow for a review of 2 Guns.