Star Trek Into Darkness: What is the line between a loving tribute and a conceited remake

New Jim Kirk (Chris Pine) returns to defend the Earth (still not boldly going anywhere just yet) and Starfleet against John Harrison (Benedict Cumberbatch), who is blowing things up because director/producer Abrams wanted to allude to real-world terrorism. The rest of the New cast returns as young, sexy versions of the original Star Trek cast along with Alice Eve as New Carol Marcus.

The first 20 minutes of the film are just awful, but it picks up quickly from there. A cold opening featuring the Enterprise saving a primitive civilization from a volcano that would apparently destroy their entire planet gets Kirk demoted and Spock (Zachary Quinto) reassigned, but before either of them report to their new assignments they are reunited as captain and first officer on the Enterprise and sent after a terrorist hiding on the Klingon homeworld, Kronos. These sequences are boring and serve only to lengthen the film and add constant, masturbatory references to Star Trek and Wrath of Khan.

It also sets a context into the film of Kirk growing into a leadership role, which is redundant because that’s exactly what the previous movie was about. Into Darkness attempts to recapture its predecessors’ brilliance by recreating plotlines, and that’s very much the wrong way to go about it.

That said, the remaining 113 minutes improve sharply, and deliver the inspired action, gorgeous space shots and clever subversions of beloved characters that made Star Trek iconic. Into Darkness, somehow, despite (SPOILERS), is capable of surprising its audience. Standard audiences will be reeling from the film’s blockbuster goods, and dedicated trekkies will have their perception of old characters and stories stiffly tested.

One bad note that deserves mention is Eve’s absolutely pointless bra-and-panties shot. Ill-advised and out of place, 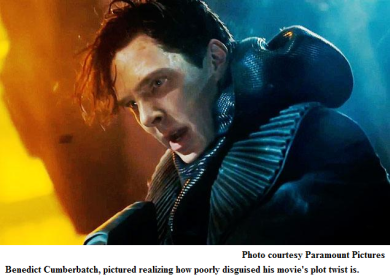 it adds a strong dash of sexism to the film and contributes to its undertone of overt fan service.

Yes, Cumberbatch’s character is  Khan. This is obvious; because when Benecio del Toro was in talks for the role, the production crew explicitly referred to the character as Khan; because Eve’s character, Carol Marcus, invented the genesis device, which is central to the plot of Wrath of Khan; because the production crew stated their villain would be a canon Trek character, which John Harrison isn’t; and because you just know they’re going to try to step on Wrath of Khan’s toes.

Wrath of Khan is one of the greatest movies ever made, and it has aged very well. Turning 31 in June, it is still a culturally relevant masterpiece. Abrams’ open contempt of Star Trek canon and space physics made him an odd choice for rebooting the film franchise, but he’s been able to make it work with alterations that are as thoughtful as they are bold. But you could just smell that he was going to try and tamper with this one.

With Khan’s return confirmed, Star Trek Into Darkness delivers its biggest surprise by extending its pattern of thoughtful subversion to the beloved plotline. While Wrath of Khan is a straightforward good-guy-versus-bad-guy movie, Into Darkness twists it into a poignant examination of the military-industrial complex. It is, in fact, necessary for Khan to be used. His background, both in the Star Trek multiverse and as a cinematic character, adds a context that would leave the movie lacking if it were gone. This isn’t just a sympathetic villain. This is a classic, evil character whose role has been reversed and who now highlights how important point of view really is.

With the good comes the bad. The plot is hard-hitting, but nothing in the universe ultimately changes. Abrams and company have huge room for artistic license here, and they take it in the middle of the story but don’t have the guts to take it in the end. This is a story about America’s military-industrial complex making things so backwards that Khan, buff space-Hitler, could be a good guy. Let’s see that extend to the Enterprise. Let’s see Bones’ (Karl Urban) miracle cures twisted for profit by insurance companies instead of forgotten about as one-offs. Let’s see the Enterprise assigned on missions of war instead of exploration. Star Trek Into Darkness packs a big punch, but that punch doesn’t have any follow-through.

Sadly, the fan service elements really take away from the overall package, and constant, playful references to Wrath of Khan don’t help. Into Darkness dances right along the line of being a loving tribute and a conceited remake, and that’s not a good line to dance on. The film would improve dramatically if it stopped trying to recreate specific, famous scenes with cosmetic twists and cut the nudity.

Ultimately it’s an enjoyable film, particularly for non-trekkies, but the constant and rapid plot recycling makes me concerned for the future of the franchise. They’re playing with fire if they keep making Kirk fight the same internal battles.

Joshua Knopp is a formerly professional film critic, licensed massage therapist, journalism and film student at the University of North Texas and a staff writer for the NT Daily. He has recently learned that Fight Club is one of the worst possible movies to watch on an airplane.  For questions, rebuttals and further guidance about cinema, you can reach him at reelentropy@gmail.com. At this point, I’d like to remind you that you shouldn’t actually go to movies and form your own opinions. That’s what I’m here for. Be sure to come back next week for a review of After Earth.

3 Responses to Star Trek Into Darkness: What is the line between a loving tribute and a conceited remake