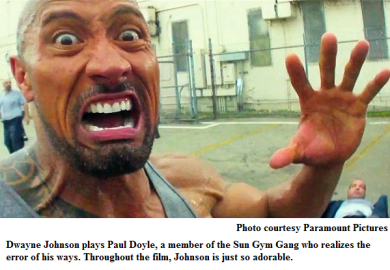 Pain & Gain has the words “Michael Bay” in the opening credits, but after those words fade out, the film becomes unlike anything Bay’s ever directed.

Based on a true story, the movie follows Daniel Lugo (Mark Wahlberg) and the Sun Gym Gang, a real-life group of gym trainers who kidnapped, mutilated and extorted wealthy members of their Miami community in the mid ’90s. In the film, he recruits Adrian Doorbal (Anthony Mackie) and Paul Doyle (Dwayne Johnson) to help him kidnap Victor Kershaw (Tony Shalhoub) and force him to sign over all his assets. Lugo and Doorbal are real-life criminals who currently sit on death row for this and much more, while Doyle is a composite of three other gang members. Kershaw is fictionalized and has his name changed.

Pain & Gain has taken some heat for making real-life criminals into sympathetic characters, but that’s actually the exact opposite of what the film does.

Pain & Gain is a rebuttal on gangster movies of the ’70s and ’80s, which do romanticize violent crime. Lugo mentions Michael Corleone and Tony Montana (Main characters of The Godfather and Scarface) as his inspiration — people who took what was theirs, regardless of the legality. Lugo argues this is the essence of some perverted version of the American Dream — he’s worked hard, therefore he deserves Shalhoub’s money.

He further rationalizes that Shalhoub, who owns a Schlotzkey’s and made his fortune through business exchanges, is a jerk and therefore doesn’t deserve what he’s earned.

The hypocrisy makes the film. Lugo, like the movies he’s mimicking, confuses being a man and living the American Dream with beating other people up and taking their things, despite the fact that it is Shalhoub who has realized the dream.

Pain & Gain is bathed in American themes and perverse movie references, the latter of which are usually used to justify something horrible. The flag noticeably hovers over Lugo as he asks for a second chance early in the movie. Acutely typical motivational speaker Johnny Wu (Ken Jeong) helps set Lugo on his journey. The bodybuilding surroundings and steroid use highlight a perverse focus on muscle mass as a measure of masculinity. Detective Ed DuBois (Ed Harris) expressly dismisses Lugo’s actions as “un-American.”

The script, penned by Christopher Markus and Stephen McFeely, further alienates the gang members with a strange, multiple narration structure. The audience hears directly from all parties, which makes it even clearer the film doesn’t want the gang seen as role models.

Bay abandons splatter-gore horror and explosion-based action for a more thoughtful movie than he’s ever made. His dull token female is, regrettably, still there, but so is his ability to make movies fun, if nothing else. His next movie, The Purge, looks to continue the thoughtful streak.

Joshua Knopp is a formerly professional film critic, licensed massage therapist, journalism and film student at the University of North Texas and a staff writer for the NT Daily. He totally doesn’t have a problem with the gangster movies of the 70’s and 80’s. For questions, rebuttals and further guidance about cinema, you can reach him at reelentropy@gmail.com. At this point, I’d like to remind you that you shouldn’t actually go to movies and form your own opinions. That’s what I’m here for. Be sure to come back next week for a review of Iron Man 3.