G.I. Joe: Retaliation’s opening credits are pretty epic until the word “Hasbro” flashes on the screen.

The film is a sequel to 2009’s Rise of Cobra in name only. Retaliation features an entirely new set of writers, a new director and an entirely new cast — Ray Park and Lee Byung-hun return as those two ninjas (Byung-hun’s character died in the first one, but whatever) and Channing Tatum returns as Duke, but he dies five minutes in. Dwayne Johnson, Bruce Willis, Ray Stevenson and Luke Bracey come in as the principal characters, but their characters don’t require any acting. Jonathan Bryce returns as the president/that one bad guy who can disguise himself really well, and he actually has dialogue so that’s neat. 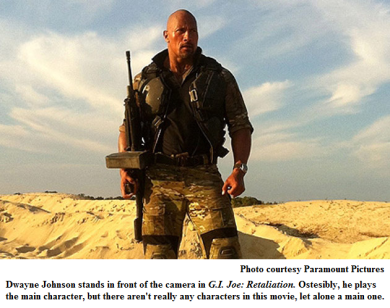 The thing to understand here is G.I. Joe: Retaliation does share two of it’s predecessor’s three producers. In that context, it is bafflingly, hilariously mishandled, even for the music video action movie it is.

Stephen Sommers, who only works on toy-selling movies, was canned as director in favor of Jon M. Chu, who lists a couple of Step Up movies and Justin Bieber concert movies to his credit. The film was pushed from a June 2012 release to a March 2013 one, despite having already committed to a Super Bowl commercial and a ton of merchandise. As mentioned above, Byung-hun’s character was impaled and dropped into the Arctic Ocean in the first movie, but he’s alive and well in this. Cobra Commander was re-cast from Joseph Gordon-Levitt to Bracey (that might not have been the producers’ decision).

This is a drawing the illustrator never cared about, and it shows. There are a lot of cool things in this movie, from the exploding fireflies to Johnson’s melt hands. Bryce, Stevenson and Walton Goggins turn in quality performances, Bryce in a major part. His character has the best nuclear disarmament plan ever.

But it’s impossible to focus on these when most of the movie is as poorly thought-out as it is. For every cool set piece, there’s a sequence where bullets don’t seem to work properly. Cobra Commander answers every good performance with lines like “Destro, you’re out of the band,” or “I need him for the war I’m about to start.” Adrienne Palicki’s role as a piece of meat is another mark against the cast’s ability to enhance the movie. After Zartan achieves nuclear zero with what is, again, the most glorious nuclear disarmament plan ever conceptualized, he destroys London.

No one seems to care about this movie, from the producers to the creative team to the actors all the way to the audience. It’s a speck of dust, a go-through-the-motions affair of ridiculous, tenuously connected action sequences. It’s industrial cinema at its worst.

Joshua Knopp is a formerly professional film critic, licensed massage therapist, journalism and film student at the University of North Texas and a staff writer for the NT Daily. He constantly wonders why the U.S. doesn’t take North Korea more seriously. For questions, rebuttals and further guidance about cinema, you can reach him at reelentropy@gmail.com. At this point, I’d like to remind you that you shouldn’t actually go to movies and form your own opinions. That’s what I’m here for. Be sure to come back next week for a review of Evil Dead.