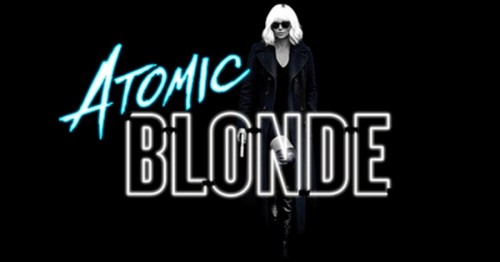 8/10 Atomic Blonde is an intentionally confusing, icy cool synthpop-noir with some fun gender reversals that turns what was a unique action franchise into a growing movement in the genre.

In November 1989, Berlin is aflame with civil unrest as communism collapses and the wall is about to come down. British intelligence agent James Gasciogne (Sam Hargrave) is killed while in possession of a list of all double-agents in the city, and Lorraine Broughton (Charlize Theron, who also produces) is assigned to retrieve it. Broughton is sent into a nest of scorpions where nothing is as it should be, a powder keg of agents gone native, botched defections and general buffoonery.

Based on a 2012 graphic novel called The Coldest City, Atomic Blonde screams of source material more interesting than the final product, but its harsh style and a great cast carry it through.

Artistically, Atomic Blonde is beyond reproach. Instead of that awful Jason Bourne editing, all the fight scenes play out in wide angle shots that last as long as possible, climaxing in a sequence in an abandoned East Berlin apartment captured in one shot that lasts a good five minutes. Theron spent two and a half months training to perform her own stunts, twisting a knee, bruising her ribs and cracking two teeth for the role. The action is still a touch slower than it would be with a more experienced stage fighter, but the authenticity and ambition more than makes up for it. As pulpy and exciting as the action and ’80s soundtrack are on their own, they’re not put together all the time, casting a strange ugliness on some of the action scenes.

Action is a smaller component of the 115 minute runtime than you’d expect coming in, but even when fists aren’t flying, the movie is a treat to look at. It’s almost black and white, but with the contrast cranked as high as it’ll go, Atomic Blonde is proof positive that you don’t need color to make exciting images. And when the blues and reds do kick in, they’re just as bold as the whites.

The movie hangs on Theron’s too-cool-for-school magnetism, but James McAvoy almost outshines her as Berlin section chief David Percival. The movie is cast spectacularly, even down to the minor roles.

Why why why would you ever change a title as foreboding and appropriate as The Coldest City? I get Atomic Blonde for action-babe marketing reasons, but to go from something so romantic to so corny as an introduction for the movie is a real shame.

As much as the praise being heaped on Atomic Blonde is said to be in spite of its plot, I think there’s actually a lot to unpack here, and that’s important because of how small a portion of the runtime the action really is. The twisting, overcomplicated plot beautifully captures its historic setting, with the inherent nationalism of government agents clashing with the multiculturalism of one of humanity’s greatest cities. It should make for fascinating and rewarding re-watches.

More and more this movie reminds me a lot of John Wick — both have nearly identical philosophies behind their action — and it turns out they come from the same stock. Atomic Blonde was directed by David Leitch, who co-directed the first John Wick with Chad Stahelski. Stahelski was initially attached to this project, but split off to direct that movie’s excellent sequel. Stahelski is working on John Wick: Chapter 3 and Leitch is currently filming Deadpool 2.

There’s also a clear influence from traditional film noir, with the color palette, war backdrop and hard-boiled plotlines all falling in line with genre conventions. There’s much more to be read into along these lines as well, particularly where it pertains to gender roles and the concept of a femme fatale.

In a crowded summer lineup where several movies are managing to stand out in a good way, Atomic Blonde is by far the best offering within its niche. It’s appointment viewing for action and espionage fans and an impressive show for less specialized audiences as well.