Where the hell did that myth start?

There’s not even very much action. Lucy mostly uses her psychic powers to just own everyone without really trying. Photo courtesy Universal Pictures.

Humans do not use only 10 percent of their brains. That’s fucking stupid, and if you believe it, you’re stupid.

Luc Besson’s new movie, Lucy, is based on this inexplicably wide-spread myth. Lucy (Scarlett Johansson) is kidnapped and forced to smuggle drugs in her abdomen. The bag of drugs ruptures, and the intense dose allows her to access more of her brain. She uses her newfound brain powers at first to shut down the drug ring that kidnapped her, then explain the lame premise in further detail to brain researcher Samuel Norman (Morgan Freeman).

What Besson has done here is build a bad movie sloppily on top of a good one. The first part of the story is cleverly intercut with rudimentary but effective natural equivalent sequences, such as a cheetah capturing a gazelle as the mobsters kidnap Lucy. It’s not the most original thing in the world, but it makes for an OK artsy experience.

Then they start talking about the fake science. I never thought I’d want Morgan Freeman to stop talking, but this movie makes a massive fool out of him. The human race’s evolution is directly correlated to our brain’s size. Every square centimeter represents a massive step forward, and any implication otherwise contradicts evolutionary theory, common sense and pretty much everything in between. And every single word Norman speaks is about this bullshit.

The stupid half of the movie should be easy to ignore, but Besson makes it into a primary part of the plot. It’s a fundamental sin for science-fiction movies — they shouldn’t be about the science, they should be about real life. Lightsabers are tantalizingly plausible weapons, but that’s not important — Star Wars would be an incredible movie in a Western or fantasy setting. There’s no way to prove we’re not inside the matrix, but that’s a secondary part of the plot — that movie was about existentialism and breaking free of the trap Western Civilization puts people into. Even without the impossible physics and chemistry taking place in these movies, they’re excellent stories. 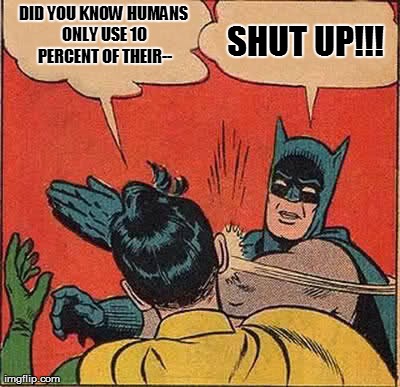 Yes, there are processes in our brain that we don’t consciously control, but they’re not the powers to control space and time. Immune response, temperature regulation and internal organ function are just a few examples of countless, still-being-discovered processes that are as ludicrously complicated as they are boring. Want complete control over your body and brain function? Good luck not dying of asphyxiation after literally forgetting to breathe.

Lucy is not. Lucy starts out as a kidnap story, but the last half of it is about the title character explaining the fake brain nonsense — it’s basically entire scenes of her speaking gibberish — to Norman. To put it in perspective, imagine if Obi-Wan had spent 45 minutes of their ride to Alderan explaining the physics of how lightsabers work, and realize how incredibly boring that would be even with something that cool.

There are a couple of workable fan theories that make this movie more enjoyable. In the scene when the drugs are released into Lucy’s body, they’ve been sewn in a bag over her uterus. After she rejects one of her kidnapper’s come-ons, the kidnapper knocks her over and kicks her in the stomach, rupturing the bag and squeezing the contents into her abdominal cavity. The drugs themselves are supposedly a synthetic version of a hormone that accelerates fetal development during pregnancy.

All of this indicates a potential allegory about a rape revenge fantasy. Lucy is kidnapped and forced to take in a foreign body, which then leaks. The contents give her superpowers, which she uses to take down her attackers and teach leading neuroscientists about her superpowers.

This allegory breaks down when you realize that her superpowers are a baby, which you can’t use to take down a drug cartel (2007’s Eastern Promises begs to differ, but that’s a very different film) or teach scientists anything because we pretty much know everything about childbirth and pregnancy at this point. However, it solves the film’s problem of not being about real life, if you can reconcile it.

Another theory is that Lucy is comatose after brain damage leaves her with only 10 percent of a functioning brain, and the movie is her fantasy about recovering after being administered a miracle drug. There is no indication within the film that this is what it’s actually about, but it eliminates some of the stupid.

Joshua Knopp is a formerly professional film critic, licensed massage therapist, journalism and film student at the University of North Texas and a senior staff writer for the NT Daily. I’m running out of Community, and I don’t know what to do. My whole brain is crying.  For questions, rebuttals and further guidance about cinema, you can reach him at reelentropy@gmail.com. At this point, I’d like to remind you that you shouldn’t actually go to movies and form your own opinions. That’s what I’m here for.