The 1987 classic Robocop opened with a news brief informing viewers that OmniCorp literally owned the police force in Old Detroit, and the film continued into an incisive examination of deep fears about corporate control and consumerism gone wild.

The central conflict of this new Robocop is political. Though their drones have pacified the entire world, OmniCorp CEO Raymond Sellers (Michael Keaton) can’t stand the $600 billion he’s leaving on the table every year because U.S. law won’t allow him to remake law enforcement. To get around the law and hopefully get it repealed, OmniCorp puts their technology on recently crippled Detroit cop Alex Murphy (Joel Kinnaman) as a way to prove their technology can work in the U.S. Murphy is stripped down to his lungs, his right hand and his brain, which OmniCorp and lead physician Dennett Norton (Gary Oldman) have extreme control over. Instead of putting a man inside a drone, they remake a man into a drone.

Robocop is the best, ballsy-est and truest remake in this newfangled remake era Hollywood finds itself in. The plot is almost completely new — the core elements of a remade police officer hunting down the people who killed him are still in place, but the surrounding material is very different.

On a superficial level, the movie is just entertaining. Shootouts are frequent, fantastic and easy to follow. The movie features Murhpy’s wife and child (Abbie Cornish and John Paul Ruttan) and Norton’s internal conflict over Murphy’s free will heavily, hitting hard on an emotional level. Even political and business discussions are gripping.

For the politically aware, underneath the action is a rising current of horror as automated combatants become more and more prevalent. The duration that Murphy is entirely machine controlled is terrifying for its implications, and aggressive, satirical political support from Pat Novak (Jackson) adds to the mounting terror. Music is used brilliantly to accentuate this. 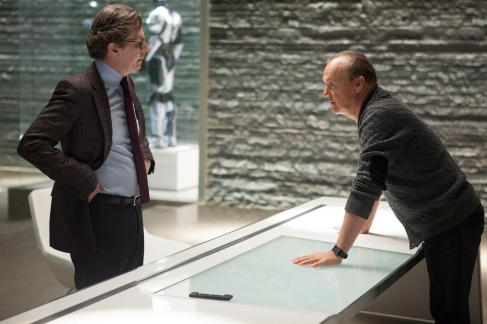 Dennett Norton (Gary Oldman) and Raymond Sellers (Michael Keaton) have several arguments over the course of the film about whether Murphy or the technology is more important. Sellers always has the money, and he always wins these arguments.

The movie’s greatest success is tonal. Good science fiction is about present-day society, and the Robocop franchise has always been odd in that it eschews the obvious “where does man begin and machine end” question for one about consumerism and police militarization. The remake updates this theme beautifully to match modern fears.

Joshua Knopp is a formerly professional film critic, licensed massage therapist, journalism and film student at the University of North Texas and a senior staff writer for the NT Daily. Seriously, how how how do you confuse Samuel L. Jackson with Laurence Fishburne?  For questions, rebuttals and further guidance about cinema, you can reach him at reelentropy@gmail.com. At this point, I’d like to remind you that you shouldn’t actually go to movies and form your own opinions. That’s what I’m here for.